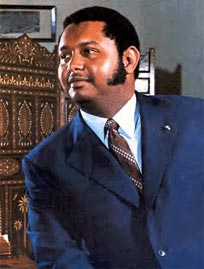 Duvalier in the Dock - by Stephen Lendman

Don't bet on it, or at most expect prosecutorial pretense, theater, with Baby Doc Duvalier free to return to his luxury French villa, though perhaps later than planned. A previous article discussed his arrival and 15 dictatorial years of rule (plus his father's), accessed through the following link:

"Haitian prosecutors presented formal charges of corruption and embezzlement against the former dictator Jean-Claude (Baby Doc) Duvalier on Tuesday, raising the level of uncertainty surrounding his abrupt emergence from exile this week."

Calling the day's events a "political show," his lawyer, Gervais Charles, said only corruption and embezzlement were involved, adding that "Jean-Claude came into this country at the wrong time. That's what this is about, not the law."

A judge will decide if enough evidence warrants trial, he explained, adding that most charges stem from $4.6 million in Swiss accounts, a small fraction of what he stole, believed to be hundreds of millions of dollars, according to Haitian lawyer Salim Succar, involved in negotiations with Switzerland.

Statute of limitations also matter, having expired in 2006. Duvalier was never prosecuted despite past charges brought, including a 1988 US District Court for the Southern District of Florida ruling (in Jean-Juste v. Duvalier) that he was liable for $500 million in misappropriated public funds, taken for personal use.

His traveling companion, Veronique Roy, was asked if he was arrested. By phone inside court she said, "Absolutely not. We are very relaxed, drinking coffee and water."

Besides stealing millions as dictator, his Tonton Macoute (praetorian guard) killers abducted and murdered tens of thousands of Haitians, many tortured to death in prison. Haitians revile him, except for cronies and elitists who profited. Even Thompson admitted that:

"The charges filed on Tuesday seemed to be a modest list for a man who is widely blamed for one of the darkest chapters in (Haiti's) history - and whose government has been accused of kidnapping, torturing and murdering thousands of political opponents."

She's mistaken, however, saying "the case against Mr. Duvalier represents a bold step by a country with a long history of impunity...." In fact, it's theater, not boldness.

Baby Doc spent several hours in court, then returned to his luxury hotel, not jail where criminals belong unless released on bail. Given Baby Doc's obvious flight risk, legitimate proceedings wouldn't allow it, besides including charges of grievous crimes against humanity for which conviction should mean life in prison without parole.

"It could be a very good step in the right direction if the Haitian justice system pursues this case. It could also be a whitewash if they don't pursue him and find a reason to let him go."

Odds tilt heavily toward the latter resolution given Duvalier's friends in high places, especially in Haiti, France, Canada and Washington. In 1986, the Reagan administration airlifted him to sanctuary in France, without official asylum. Charges at the time weren't filed nor threat of extradition. He got virtual amnesty for 25 years, so why sudden change now. He spent his first full day back visiting with secret police friends.

Besides foreign allies, influential Haitians support him. Putting him in the dock exposes them for years of criminal complicity and profiteering. Chances of that are virtually nil, so expect smoke but no fire, except perhaps a quiet settlement for a small fraction of what he stole, whitewashing his kidnappings, torture, and mass killings.

His presence "adds unpredictability at an uncertain time in Haiti's election process. We don't believe at this point Haiti needs any more distractions. Our focus right now is to help Haiti through this delicate period, have a new government emerge that is credible enough and legitimate enough and viewed positively in the eyes of the Haitian people so that the country....can move ahead" and rebuild.

Not a word of how Washington supported his reign of terror and massive theft. Nor about Haiti's sham elections. Rerunning a credible process is essential, with all wrongfully excluded parties participating, especially Fanmi Lavalas, by far the most popular.

Like his father, Papa Doc, Washington, other countries, and international lending agencies supported him generously. In fact, for decades, America allied with the worst of world tyrants, the list comprising a scandalous rogue's gallery, including:

-- Nicaragua's Anastasio Somoza, Sr., a man Franklin Roosevelt called "a son of a bitch, but he's our son of a bitch;" so aren't all others Washington supports;

-- other Middle East despots, including Tunisia's Zine al-Abidine Ben Ali for 23 years until forced out;

-- Israeli despite decades of slow-motion genocide against Occupied Palestinians;

-- Iraq's Saddam Hussein before falling out of favor;

-- Panama's Manuel Noriega before falling out of favor; and dozens more.

"Experts on Human Rights UN" say, "It is not clear yet, if Haiti is in a position to arrest or prosecute Jean-Claude Duvalier....Everyone knows that very serious things have happened in Haiti, but we need evidence for prosecution," adding that UN and other officials benefitted during his exile. Despite past complaints and charges, he was never arrested or prosecuted. Now statute of limitations expired, no doubt affecting the timing of his trip.

Expecting prosecutorial justice and stolen millions recovered is practically nil. Whitewash is more likely, except for minor slaps on the wrist, keeping Baby Doc's dirty linen safely hidden with most of his loot.