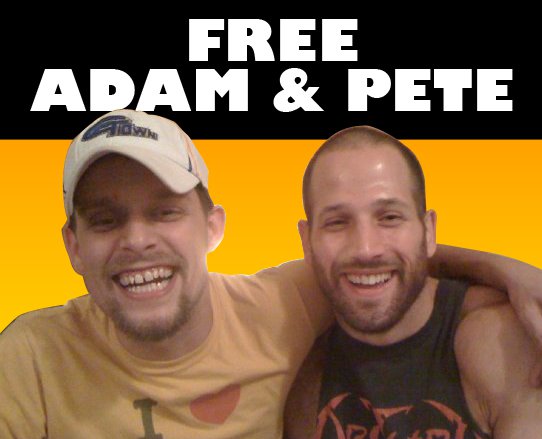 This morning we had a video arraignment in Keene District Court for Pete Eyre, arrested yesterday for peacefully wearing a hat. We started the day at 8am and it wasn’t until around noon that Pete’s arraignment occurred. We spent the first hour from eight until nine passing out Don’t Plead Guilty flyers.

The video was set up in a way so that Pete could not see supporters in the audience. Earlier, people had asked a bailiff if Pete would be able to hear us and he paused, before informing us that he would, but that we should stay quiet. Michele Seven, filming the video and judge as an independent source, asked if she could say hi to Pete before the judge walked in, but was denied that privilege by the bailiff.

The proceedings began with a lengthy charge, that sounded far more ludicrous than actual events. Earlier, we had been attempting to protect his identity, but information had already been leaked as they knew his name, but Pete refused to identify. Most of the proceedings were repetitive with Judge Burke telling Pete it was in Pete’s hands whether he got out, all he had to do was identify. Pete politely asked if he had a chance to speak his mind on what had occurred, which Burke denied, instructing that the only thing they needed from Pete was identification and choosing counsel, if desired. Pete kept firmly, but politely, insisting that it was Burke that had the decision and could let him go.

At one point, Burke said one of many numerously redic things, to which Smeg laughed louder than usual. Judge Burke then instructed the bailiffs to remove us all from the room, but Smeg insisted she was the only one who’d laughed, taking responsibility for her actions, as many anarchists do. The bailiffs continued to ask us to all leave until finally Smeg’s petitions of responsibility were heard and Burke changed his statement to only Smeg, and not the entire group.

As the repetitious conversation between Pete and Burke continued, Ademo grew upset, and likely knowing Pete could hear his comrade, began walking out of the room, calling the court a joke and saying it had no life. Burke immediately ordered him arrested. We soon learned there may be an immediate arraignment and waited. The bailiffs allowed us to communicate through a partially closed door and let him enter his password on the phone so we could access it. They also ignored us listening to Ademo through the closed door later.

In a few minutes, we learned there was going to be a right of allocation (not arraignment), followed by sentencing, so we returned to the courtroom. A right of allocation is where the individual in contempt gets a chance to speak their mind on the matter. After determining, Ademo’s legal name, the right, in reality a ritualized privilege, was given. Ademo stated that he was sorry for hurting Burke’s feelings, but thats how he felt about the proceedings. Burke denied that he offended the individual, but offended the court, but insisted it was a matter of societal civility that determined the policies. Ademo informed Burke that he was never informed of these laws. This did not go on long before Burke sentenced Ademo to sixty days in the county jail. As he was being drug away, he yelled out that he would not be eating.

Smeg had been part of the audience during the proceedings with Ademo and started asking why they were harming her friends, insisting they stop. For several minutes, she stood, petitioning the bailiff to get the judge and make him stop this nonsense, but was ignored. Meanwhile, he was also demanding we leave the courtroom. Several left, but several others remained seated. The bailiff threatened arrest against Smeg several times before she finally relented, but he did not actually use any violence and remained calm, far better than Sergeant James Cemorelis or Judge Burke.

We ran outside to see him off via the sheriff’s vehicle and he was smiling and waving, with his hands in the front, as he left. I flashed him a peace symbol as the vehicle drove away.

Plans are being discussed now and we recommend writing op-eds to the Keene Sentinel and Union Leader. I would recommend reading Tom Knapp’s Recommendations for Writing a Libertarian Op-Ed. Smeg is talking about not eating in conjunction with Ademo. I’d invite people to consider joining her, if they’re interested. There is a facebook group coordinating a response as well. I’m sure there will be discussion on FreeTalkLive as well as a special show by Todd Andrew Barnett, Smeg and I *may* be on.

Videos should be coming shortly on Free Keene, Liberty On Tour, and Cop Block.

1 Comments in Response to Adam & Pete from Liberty on Tour are BOTH in a Cage!

Either don't go to court or be prepared to take your hat off.  It's that simple.  The Supreme Court just ruled last week that judges can do pretty much whatever they want regardless of the CONstitution.

Sometimes standing up just to make a point is just plain stupid.  More and more, the LOT guys seem more like salesmen; salesmen who get themselves into situations they know will get them attention from "The Man," which they in turn use to raise money and to promote Liberty on Tour, The Motorhome Diaries, Cop Block, etc.  Of course it isn't always the case, and they are good guys, but it sure seems that way sometimes.   I absolutely hate being in a cage, but if you don't mind it I guess it's a good schtick to raise a few bucks and get yourself some notoriety, but I don't see how it helps the cause of "liberty."

Everybody knows the cops are screwed up scumbags.  Just look at what's happened in the last 24 hours - 11 cops shot.