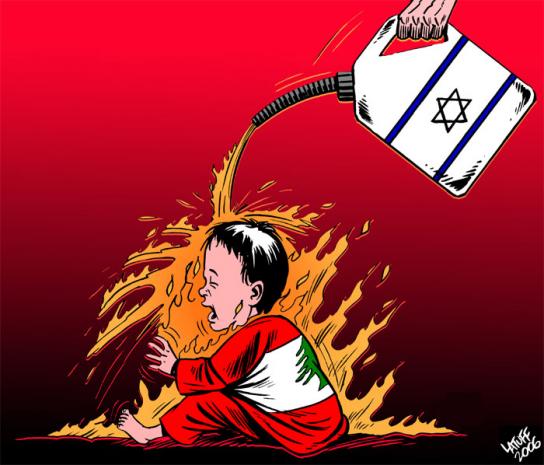 Hezbollah-backed Najib Mikati, a Sunni billionaire, became new prime minister after getting 68 votes, a majority in Lebanon's 128-member parliament. Caretaker PM Saad Hariri got 60. As a result, Hezbollah "is now in position to control Lebanon's next government. The move has set off angry protests and drew warnings from the US that its support could be in jeopardy."

"Sunni blood is boiling," chanted protestors. Burning Mikati pictures, they said they won't serve in a coalition government, adding that anyone allying with Hezbollah is a traitor. After being appointed, he said:

"I extend my hand to everyone....This is a democratic process. I want to rescue my country....My actions (as PM) will speak for themselves."

"I affirmed to the president that cooperation will be complete between us to form a new government which the Lebanese want, a government to maintain the unity of their country and their sovereignty, achieve the solidarity of its people, protect the coexistence formula and respect the constitutional rules."

However, nothing in Lebanon is ever simple, especially with Washington and Israel often intervening politically, economically and/or violently.

Commenting briefly, State Department spokesman PJ Crowley said Washington has "great concerns about a government within which Hezbollah plays a leading role," adding that relations and Washington-supplied aid will be affected.

She accused Hezbollah of "coercion, intimidation, (and) threats of violence to achieve its political goals," adding, (o)ur bottom lines remain as they always have been. We believe that justice must be pursued and impunity for murder ended. We believe in Lebanon's sovereignty and an end to outside interference. As we see what this new government does, we will judge it accordingly."

In fact, no nation matches Washington's worldwide lawlessness, waging imperial wars for global dominance and increasing repression of its own people at home.

"It is hard to imagine any government that is truly representative of all of Lebanon would abandon the effort to end the era of impunity for assassinations in the country (referring to Mossad's 2005 Rafiq Hariri killing falsely blamed on Hezbollah). In the meantime, we call on all parties to maintain calm."

America designated Hezbollah a foreign terrorist organization, meaning aid is automatically suspended. In the past five years, it's been $1.2 billion, and the Obama administration requested $246 million more this year.

Hezbollah supporters dismissed US concerns, saying Lebanon's power shift will be conciliatory and peaceful. According to Hassan Khalil, publisher of the left of center Al Akhbar:

"Mikati is not coming to power by force, a coup or by civil unrest. (It's by Lebanon's) parliamentary system. (Moreover, (f)unding from the United States is limited and will not disturb the balance of power," if cut off.

According to American University of Beirut Professor Hilal Khashan, however:

"If most of the Sunni community doesn't accept Mikati's designation, we have a problem. If they are unhappy, that would violate the spirit of the constitution," arguing that he risked "political suicide" if he tries forming a government opposed by Hariri supporters who consider him a tool of a Hezbollah "coup."

On January 23, Hezbollah leader Hassan Nasrallah pledged to include political rivals in a coalition government, saying:

We seek a "national partnership in which all parties will participate. We respect everyone's right to representation."

Middle East analyst Franklin Lamb believes Mikati's appointment is a "done deal," substituting "sunni billionaire #2 (for) #1." Though street protests erupted, they "won't amount to all that much and the army will break up rowdy demos." Anger will subside. There's "not much the Obama administration can do. (S)treet pressure (might) close the US embassy, (but Washington) has almost no options since it will not squeeze Israel, so it gifts another Middle East country to the rising other empire," suggesting Iran, closely allied with Hezbollah.

Though "the Heabollization of Lebanon" is worrisome, it's "not like they will start shooting at us tomorrow. They are busy now with internal affairs."

According to vice prime minister Silvan Shalom, however, a Hezbollah-dominated Lebanon is "a very, very dangerous development," adding it's like having "an Iranian government on Israel's northern border."

"We are concerned about Iranian domination of Lebanon through its proxy, Hezbollah. We are not going to give the other side any excuse whatsoever to initiate an escalation along the border," no matter that Hezbollah doesn't "initiate." It responds defensively as international law allows to repeated Israeli provocations.

"If Hezbollah is behind the government, it will be much easier to explain to the international community why we must fight against the State of Lebanon."

In a January 25 editorial, headlined "Any misstep could imperil Lebanon," Beirut's The Daily Star called "none" of Lebanon's "handful of options" going forward "very promising," adding:

New Prime Minister Mikati is less conciliatory than partisan. "As such, the faction would never have named (him or anyone else) unless their man agreed to (rescind) cooperation with the (UN-backed) Special Tribunal for Lebanon (STL), (as well as reverse) other decisions or policies of the previous Cabinet which did not accord to March 8's liking (the coalition, including Hezbollah)."

As a result, the "country is a powder keg, and any misstep could have unforeseeable and tragic consequences."

A Tripoli-based MP before becoming prime minister, he's also a billionaire businessman. In 1982, he and his brother, Taha, founded Investcom, a telecommunications company, transforming an enterprise into an empire with investments in the Middle East, Europe and Africa before selling to South Africa's MTN Group in 2006 for $5.5 billion.

Since 1998, he's been an MP, public works and transportation minister, and past prime minister briefly in 2005 after Rafik Hariri's assassination.

Although considered pro-Syrian, he promotes consensus. He also supports philanthropic causes, and was involved with the "Beirut Pact," a socio-economic project to improve Lebanon's developmental standards, including working for regional economic parity.

Detailed information on Lebanon's current status can be accessed through the following links:

Charged under 284 counts of involvement in 1998 attacks on US embassies in East Africa, his New York civil court trial exonerated him on all charges, save one count of conspiracy used when no evidence exists to convict. It seemed a stunning victory for the defense.

On January 24, however, Judge Lewis A. Kaplan sentenced him to life in prison without parole saying, despite no corroborating evidence:

"Mr. Ghailani knew and intended that people would be killed as a result of his own actions and the conspiracy he joined. The very purpose of the crime was to create terror by causing death and destruction."

His lawyers will likely appeal. However, before conservative justices in today's climate of fear, Ghailani stands little chance because it's the wrong time to be Muslim in America, judged guilty by accusation.