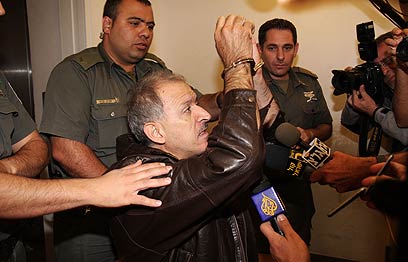 A previous article discussed him in detail, accessed through the following site:

Following former prime minister Ariel Sharon's dictum that, "This is our land, and we'll settle it and build on it in order to prevent the creation of a Palestinian state," Palestinians have been ruthlessly persecuted, imprisoned, or slaughtered in gross violation of international laws.

Ameer Makhoul is one of many thousands of victims, vilified for being Muslims in a Jewish state. An Israeli citizen, human rights activist, and head of the internationally recognized Ittijah NGO for Palestinian empowerment, he also chairs the Public Committee for the Defence of Political Prisoners within the Arab Higher Monitoring Committee in Israel. Besides championing human rights, he also supports the global BDS movement, what many believe is perhaps the most effective nonviolent tactic against Israeli lawlessness, and another reason for his targeting.

In May 2010, he was arrested on spurious charges of spying for Hezbollah, Israel's way to silence a respected Palestinian. At the time, attorney Hussein Abu Hasin said accusations were so vague and wide-ranging that emails, Internet chats or phone conversations with anyone about anything could be used as a pretext to prosecute for communicating with a "state enemy," whether or not true and regardless of the right to speak freely with anyone.

On May 6, his ordeal began when about 20 Israeli police and security forces arrested him at 3:10AM, ransacked his apartment, confiscated his computers, cell phones, various documents, maps, and other possessions. At the same time, his Haifa office was raided for other potentially "incriminating" evidence, a Shin Bet warrant saying only that "secret information" justified it for "security reasons," when, in fact, none whatsoever existed.

Makhoul was detained incommunicado at Petah Tikva for interrogation. Under an initial gag order, the Israeli media couldn't write or discuss anything about his case.

He endured 12 days of brutal interrogation, including torture and sleep deprivation. After three weeks, he was charged with espionage, helping an enemy (Hezbollah) in time of war, contact with a foreign agent, and other spurious charges, all of which he denied.

On June 14, prosecutors claimed "secret evidence" against him, withheld from his lawyers for "security reasons." In addition, all attorney conversations were wiretapped, and despite requesting medical help from the Association of Physicians for Human Rights, it was repeatedly denied.

He remained imprisoned, a Committee for the Defense of Ameer Makhoul established on September 8 to defend him. Comprised of dozens of Jewish and Arab figures, it took collective responsibility because:

-- his arrest signified what he represents, not just himself, and it was done to warn other activist Israeli Arabs; and

-- charges against him were entirely spurious, his targeting to silence a respected, powerful, effective political voice for all Arab Israeli citizens.

On September 16, he was charged in Haifa District Court, even though Israeli prosecutors said his home and office computers, cell phones, other possessions, and transcripts of about 30,000 wiretapped phone conversations revealed no evidence of espionage.

His "lawyers struck a plea bargain with the prosecution in October 2010, in which they asked for a reduced sentence of seven years, while the prosecution (wanted) 10....the maximum sentence for the charges against him."

The ruling accused him of supplying "intelligence to a Hezbollah agent on Shin Bet installations in the Haifa region and on Mossad offices in the center of the country. (Also, that he attempted) to pass on information about a military base and sought details about the residence of Shin Bet chief Yuval Diskin."

His fellow activist Omar Saeed earlier struck a plea bargain in August, under which he was charged with "working for an illegal organization, a crime that carries a punishment of several months' jail-time."

Makhoul's "jailing is a very disturbing development and we will be studying the details of the sentencing as soon as we can. (He's) well known for his human rights activism on behalf of Palestinians in Israel and those living under Israeli occupation. We fear that this may be the underlying reason for his imprisonment."

Philip Luther, AI's Middle East and North Africa deputy director, expressed concern that he was tortured and abused after his May 6 arrest, was isolated for 12 days, had no contact with counsel, and a media gag order prevented discussion of his case. Moreover, under Israeli law, people can be charged with espionage even if information passed on is publicly known or if no harm was intended or caused.

In addition, his alleged confession was extracted by torture, meaning none of it is credible or admissible. Also, what he allegedly passed on was publicly known. He, in fact, was targeted for his activism and prominence, not any alleged crimes. His sentencing came at a time Israel is increasingly targeting human rights activists, accused by some MKs of being "anti-Israeli" and unpatriotic because of their support for Palestinian justice. Makhoul heroically did it. He'll now serve nine years in Israel's gulag, perhaps brutalized until released after which he vowed to continue public activism.