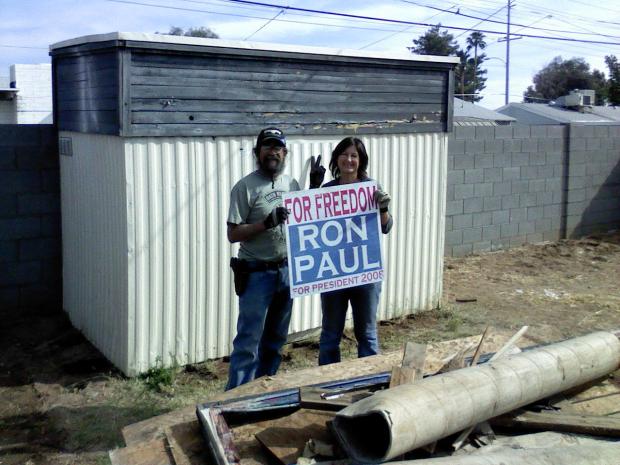 Donna and I pose for a final pic.
The End of an Era
By Ed Vallejo
2-6-2011
History quite often goes unnoticed as such, until it is reflected upon - especially at the moment when it is made.
I had the good fortune to participate in an event this past weekend that impressed me quite deeply, even though it involved a good deal of heavy labor.  I disassembled and transported the tool shed that Ernie and Donna had in their back yard up to their new residence, which I will be setting back up this week after setting the footings.  I also assisted Donna in emptying out the back yard, with the help of my good friend John Penrose.  I have an open-air trailer with sides to it so I had plenty of room to haul stuff away. 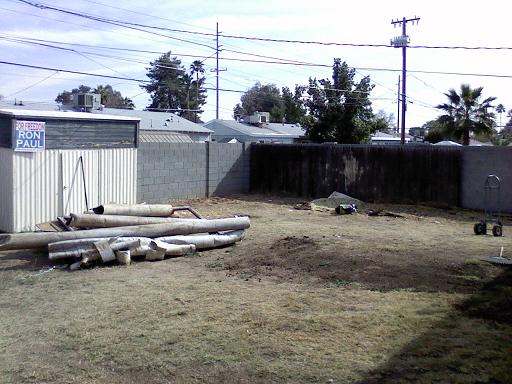 When Donna had loaded everything she needed and we had piled up all the debris to be taken to the dump, she looked at the pile of waste from the chicken coop.  She had mentioned (with extreme dread in her voice – mainly because Ernie is bed-sick with some illness, and it was up to her to get the yard cleaned out) about bringing some bags for it.  I told her not to even worry about it – a fellow gardener friend of mine that had helped me break down the shed the day before had motioned to it longingly when he saw the pile of nutrient-dense manure, and had agreed to help me reclaim it if necessary.  Since his Mother’ had had a pipe burst in her attic and he had to repair it, I had John help me bag it up and load it onto my trailer.  500 pounds of fertilizer and saving probably the hardest working, most dedicated person I ever met an ass-busting chore was worth the extra time and effort.
When Donna left, she looked around and sighed, and looked at me and said “well, I guess that’s about it.  If you don’t need inside, I’ll lock up, and turn the keys in.”  I know that look, and that sound.  I remember back to the last residence that I had for many years, and I remember what it’s like having all those memories of what happened there whiff through your head in a moment, and then you’re gone.  I can only imagine the things she’s seen and heard there.  All those years as Ernie and her developed as Activists.  All the people they’ve had at their house.  All those parties.  All the ‘Meetings’.  The ‘Brainstorm Sessions’
Assembling ‘packets’ of – whatever.
I’ve only known the Hancocks since I became ‘aware’ in 2004 with my registering to vote for the first time in my life at age 45 and joining the Libertarian Party to campaign for Michael Badnarik, but I’ve been involved in enough just myself since then, and have many fond memories of the place myself.  Shoveling shit gives one time to think (LOL).  Out of all the activities, I think I spent more time doing something related to DVD’s than anything else because we spent so many hours doing just that before The Workshop came into being.  The upside of that being the diversity of the people that showed up to help, and the conversations that went on while the hands kept busy.  Great times, and great friends gained.
It’s ironic but appropriate that my best memory of their house had nothing to do with any of the Hancock family themselves.  Providing venues for important ‘happenings’ for others is, what I believe, the Greatest Things for Mankind that Ernie and Donna have ever done for it.  It was some time ago when Michael Badnarik was in town for an event (I think it was a Freedom Summit) and was staying at the Hancock’s.  I had worked it out to give Mike a ride to there from the event, and I brought my best friend in the world Kelly Carter along with me so I could introduce them both.  When we got there it was late evening and everyone was tired, but he was so gracious and Kelly a big fan that we ended up sitting on the couch and talking for quite a while – to both of our delights.  I remember the first time I got to spend with Mike, and it’s so uplifting just knowing that there are such Great Men in America today.  It was a night to remember, for Kelly and I both.
As I close the gate as the last person of the ‘Hancock Retinue’ to leave those now-hallowed grounds before the keys get turned in, I feel history being made.  Times are definitely changing, and this feels like a heavy mark on the timeline.
I most sincerely and humbly thank the Hancocks for all they have done, and thank God FOR them, and pray that He continues to Bless them both with all good things in life.
May an Era of Struggle be declared ended, and let an Era of Liberty commence! 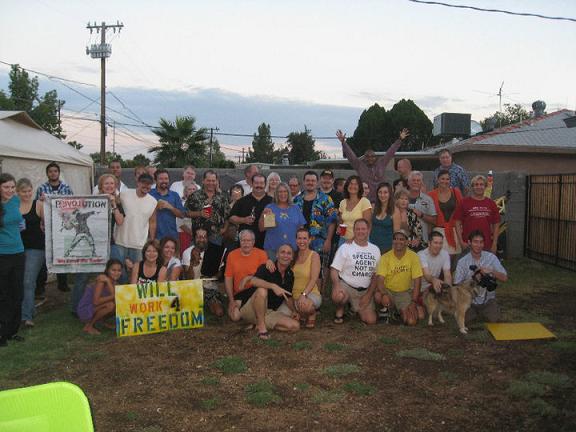 2 Comments in Response to The End of an Era

What a reflection on all the "bees" of the past (husking, sewing, barn building, harvesting, etc.) - this made our country.  Unless recorded, it fades in the rear view mirror of life eventually gone except in memory.  All the more reason to be sure to record it properly much as Laura Ingalls Wilder did in "Little House on the Prairie".

Ed, what a great article you have written here.  It is appropriate/fitting that you of all people be the one closing the side gate of that house for the last time.

Indeed history quite often goes unnoticed as such, until it is reflected upon - especially at the time when it is made.

I hope I never forget all the time spent at 11th Way.

Thank you Ernie and Donna for everything.

Covid and the Three Tests of Compliance

Zelensky & a $35 Million Estate in Florida?

"I Ask One Question To Spot A Psychopath" - Jordan Peterson

Oh Good Grief. US Military Fears China May Reach Balloon Wreckage Before They Can Get There -

FOC Show: WARNING for Those in These Danger Areas

The Cancellation of a Civilization

Raging Bulls in Blue: The Deadly Toll of Warrior Policing on Steroids