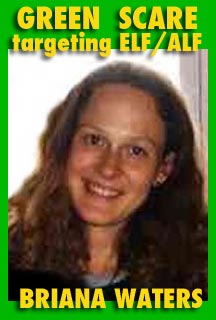 An earlier article discussed her case, accessed through the following link:

Content from it is repeated below before updating her status. An innocent woman, she's one of many victims of US state terrorism, in her case for courageous environmental activism. Her web site provides more information, accessed through the following link:

On March 30, 2006, she was arrested, then falsely accused of being a lookout in connection with a 2001 arson at the University of Washington Center for Urban Horticulture.

In fact, she's a California resident, a professional musician, violin teacher, and mother of a young child. Yet, she was bogusly indicted, then reindicted with other defendants on May 10, 2006, including charges of using a destructive device, carrying a mandatory 30 year sentence if convicted.

On December 26, 2007, her lawyers filed a motion, accusing the Justice Department of concealing vital exculpatory information as well as producing a fraudulent FBI report. The agency commonly uses bogus "evidence," getting manipulated/paid informants to affirm it. Nonetheless, a hostile federal judge denied defense's motion. Moreover, he ruled against letting his expert rebut government "evidence," claiming a delayed incendiary device was a bomb.

"The government hand-pick(ed the) judge (and) manipulat(ed) court procedures. This is a classic case of a corrupt prosecution, and a judge who apparently (chose) to look the other way."

It's unsurprising at a time two-thirds of all federal judges are from or affiliated with the extremist Federalist Society. It advocates rolling back civil liberties; ending New Deal social policies; opposing reproductive choice, government regulations, labor rights and environmental protections; as well as subverting justice in defense of privilege.

As a result, Waters was disadvantaged at trial, begun on February 11, 2008. She was further jeopardized by an indictment based on testimonies of two co-defendants. In return for leniency, they copped a plea and agreed to cooperate, knowing an innocent woman would be harmed.

As a result, on March 6, she was convicted on two arson counts, but jurors deadlocked on more serious charges of a destructive device and conspiracy. Despite prosecution claims, no devices were found nor was evidence of conspiracy proved.

At issue is willful Justice Department (DOJ) fraud and deceit, falsifying evidence, then lying to jurors about it. In America's war on terror, it's common practice to indict, convict and imprison innocent people for political advantage. Many others like Briana have been harmed.

In her case, circumstantial evidence was crucial, including a folder containing radical pamphlets with an alleged note she wrote. She categorically denied it or its views. DOJ attorneys claimed otherwise.

Her attorneys also said she knew nothing about the materials. They were, in fact, substituted for others she put in the folder, and her fingerprints weren't on the alleged incriminating ones for proof.

Civil rights attorney Ben Rosenfeld said the "government's case was primarily based on character assassination, guilt by association, (and that) evidence of other people's writings should never have been allowed to be used against her."

He also denounced former Attorney General Gonzales for using the media to pronounce Waters guilty after her indictment. As a result, he harmed her chances at the outset, showing convictions matter more than justice, especially on charges of terrorism or conspiracy to commit it.

Throughout her ordeal, Waters steadfastly maintained her innocence. On February 11, 2008, her trial began, prosecutors claiming she was a dangerous environmental terrorist willing to commit crimes, despite no incriminating evidence. According to her Neil Fox/Robert Bloom defense team:

"Not only has Briana Waters pleaded not guilty, she is not guilty....She is completely innocent, not involved in this or any other arson. The government's proof is what is on trial. The government must prove (its charges) beyond a reasonable doubt....Ms. Waters is innocent not because of some technicality, but because she was not involved with this group of people in any arson, in any discussion of arson....that's not what happened."

Nonetheless, on March 6, 2008, jurors convicted her of two arson counts, exonerating her on three others. On June 19, 2008, she was sentenced to six years imprisonment and ordered to pay $6 million in restitution. Commenting, attorney Bloom said:

"Prosecutors used scare-mongering to get the jury to convict an innocent person. This is really a study in American prosecution. It was an absurdly slanted" case against an innocent, victimized woman.

She appealed, and on September 15, 2010, the US Court of Appeals, Ninth Circuit overturned her conviction, ordering a new trial after ruling proceedings against her were riddled with judicial errors. In a unanimous decision, a three-judge panel said:

"While the evidence against Waters may have been sufficient to sustain her conviction, our review of the record does not leave us convinced that her conviction was fairly obtained."

Writing for the panel, Judge A. Wallace Tashima said prosecutors made a "number of errors," including letting jurors review "highly prejudicial" articles, alleging Waters gave them to another defendant, who copped a plea for leniency.

"We believe that the appropriately skeptical eye would have excluded the articles from (her) trial. (They) were highly prejudicial. While most espoused anarchist political theory, a number advocated violence in no uncertain terms," including attacks on US landmarks. "Their repugnant and self-absored embrace of destruction is likely to have swayed jurors' emotions, leading them to convict Waters not because of the facts before them but because she represents a threat to their own values."

During trial, prosecutors also prevented defense attorneys from showing jurors a documentary she worked on supporting nonviolence, thus "compounding errors" against her, "depriving her of her opportunity to demonstrate that her purported belief in nonviolence was genuine."

Attorney General Eric Holder has proved as callously outrageous as Ashcroft, Gonzales and Mukasey, pursuing wrongful/vindictive/shameless prosecutions for political advantage against innocent victims like Waters. Moreover, they persist even when courts overrule them.

As a result, on January 26, Waters was reindicted on nine counts, including:

-- arson of a building used in interstate commerce or activity affecting it;

-- using a destructive device during a violent crime; and

-- arson of a building belonging to an institution getting federal funding.

Her scheduled trial date is June 27, 2011, a date possibly delayed until later.