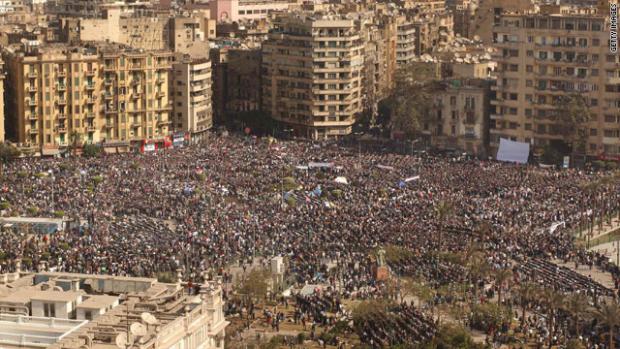 "(P)olice using force to extract confessions from criminals (is) a daily event. (US informants) estimate there are literally hundreds of torture incidents every day in Cairo police stations alone."

"(T)he GOE (government of Egypt) is probably torturing (an April 6 activist) to scare other....members into abandoning their political activities." It also referred to the "sexual molestation of a female 'April 6 activist,' " and that another victim's torture only stopped "when he began cooperating."

Moreover, "standing orders from the Interior Ministry between 2000 and 2006 (instructed) the police to shoot, beat and humiliate judges in order to undermine judicial independence."

"(A) recent series of selective (government) actions against journalists, bloggers and even an amateur poet illustrates the variety of methods available to the GOE to suppress critical opinion, including an array of investigative authorities and public and private legal actions."

"Egypt's State of Emergency, in effect almost continuously since 1967 (since Nasser and Sadat), allows for the application of the 1958 Emergency Law (EL), which grants the GOE broad powers to arrest individuals without charge and to detain them indefinitely," omitting what's also common in America and US-controlled offshore torture prisons extra-judicially.

According to the International Federation for Human Rights (IFHR), Egypt's EL grants "broad power to impose restrictions on the freedoms of assembly, movement or residence; the power to arrest and detain suspects or those deemed dangerous, and the power to search individuals and places without the need to follow the provisions of the Criminal Procedure Code."

Other cables identified Egypt's military as the real center of power. One on July 30, 2009 said, along with state security forces, it:

"would ensure a smooth transfer of power, even to a civilian," to assure seamless succession under new leadership.

Egypt also partnered with Washington and Israel by enforcing Gaza's siege. Moreover, it did it for internal security reasons because of the Muslim Brotherhood's alleged ties to Iran, Syria, Hezbollah, and Hamas.

At the time, Egypt's crumbling infrastructure, fragile transportation and telecommunications networks, as well as fear of re-nationalizations deterred foreign investments. As a result, relaxed import controls facilitated flooding Egypt's market with luxury goods for the rich, not economic growth that deteriorated instead, mostly harming its workers and poor.

In November 1977, Sadat extended peace overtures to Israel in Jerusalem. A year later, Camp David followed, establishing full diplomatic and economic relations as well as getting Egypt expelled from the Arab League (AL), its headquarters moved from Cairo to Tunis. In 1989, Egypt was readmitted. In 1990, AL's headquarters returned to Cairo.

Sadat hoped economic growth would follow as well as US aid. His October 1981 assassination elevated former air force commander/deputy defense minister/air chief marshall/vice president Mubarak to power, replacing him. From then until now, he served reliably as a US puppet, profiting handsomely from the relationship, besides what he gained from other high positions.

He allied with America's 1991 Gulf War, collaborating again in 2003 by giving Pentagon forces priority Suez Canal access and unrestricted use of Egypt's airspace. At the time, David Welch, Assistant Secretary of State for Near Eastern Affairs called America's partnership with Egypt "a cornerstone of our foreign policy in the Middle East." It leveraged its relationship to secure other regional allies. In return, Mubarak and Egypt's ruling class profited handsomely at the expense of their deeply impoverished people, the spark, along with extreme repression, that erupted in protests.

In her February 4 Foreign Policy article titled, "Anatomy of a Dictatorship: Hosni Mubarak," Elizabeth Dickinson said millions of Egyptians forced him not to run again for office, but demand more. "The president, they charged, was an autocrat, a repressor, and a tired leader. He had to go....Mubarak's Egypt," in fact, "is a textbook police state. For 30 years, anger and frustration brewed among his subjects, bottled up and sealed with fear."

Egypt's brutal police enforced hardline control, targeting activists, dissidents, Islamists, opposition forces, and anyone perceived threatening as well as ordinary citizens suspected of crimes or looking suspicious. In June 2010, a young man, Khaled Said, was beaten to death for not showing his identity card after entering an Alexandria Internet cafe. Torture and disappearances are also commonplace as are sham elections.

"Even if a candidate manages to successfully jump through (numerous) hoops, the Political Parties Commission, (responsible for registering parties) has broad authority to close offices, seize funds, or refuse to recognize a party in the first place - meaning that in practice, elections are only as competitive as Mubarak wants them to be."

"Academia isn't safe either: Since the state controls promotions, appointments, and university administration, a subtle self-censorship prevails." As a result, professors have been fired and students harassed, especially leaders for organizing.

Gays and other minorities are targeted as well, including mass arrests of men accused of homosexual acts. Though religious freedom is allowed, Christians at times clashed with police.

It explained that Emergency Law powers are used "to detain peaceful critics and opponents as well as people suspected of security offenses or involvement in terrorism." Some are detained administratively. Others get unfair military trials. Many are tortured. Death sentences are freely imposed. Freedom of speech, assembly and association are extremely restricted.

Besides various lawless acts discussed above, forced evictions have also been commonplace. In 2008, residents of 26 Greater Cairo areas were affected, their communities called "unsafe" under a government master development plan. Administrative orders were implemented "without notice or prior consultation," preventing the likelihood of legal challenge.

Evictions from areas called unsafe "breached the international standards that states must observe, (requiring they) have procedural safeguards in place." Instead, hundreds of homes were demolished with inadequate or no notice or consultation given affected communities, including plans for resettlement. As a result, homelessness and other state-imposed harshness followed. Egypt's poor, marginalized population suffers grievously under repressive regime policies.

Given this backdrop and sustained visceral mass protests, the Obama administration is stalling for time, a White House February 5 press release saying:

"The President emphasized the importance of an orderly, peaceful transition, beginning now, to a government that is responsive to the aspirations of the Egyptian people, including credible, inclusive negotiations between the government and the opposition."

On February 7, Al Jazeera said two weeks of protests show no signs of abating despite some emerging normality in parts of Egypt's capital. Dr. Sally Moore, representing the Popular Campaign in Support of ElBaradei (one of six groups comprising the "Youth of the Egyptian Revolution" coalition) said:

"The word 'stability' is a word the regime uses all the time - but - what is stability without freedom. We are in for the long haul. The regime is trying to play us against the people in Tahrir Square, but we always remind them they are our people, our families. (They) want radical change, not minor reform."

"Protesters tell me Obama still hasn't come up with any statement that they want to hear. They want immediate change and the feeling among many of them is that the way the US is handling this crisis is not good for the way America is perceived both here and in general in the wider region."

In fact, from the outset, the Obama administration acted duplicitously to maintain imperial control throughout the region, especially by ensuring continuity in Egypt, under Suleiman and other reliable figures. On February 5, Secretary of State Clinton endorsed him saying:

"I think it's important to support the transition process announced by the Egyptian government, actually headed now by Vice President Suleiman (and) an orderly establishment of the elections that are scheduled for September."

She also backed Egypt's military "as a respected institution" and its banking sector. In other words, money and martial power are crucial ingredients of Washington's imperial control.

How and when this ends remains uncertain, but one thing is clear. Millions of Egyptians exhibited extraordinary sustained courage. So far, they're not backing down from one of the region's most brutal regimes, financed and supported by imperial Washington, maneuvering to keep it empowered as a reliable vassal state.

"So far, they're not backing down from one of the region's most brutal regimes, financed and supported by imperial Washington, maneuvering to keep it empowered as a reliable vassal state."

I guess when Egypt was run by anti-U.S. anti-Israel leader Nasser, who lost the Six-Day War, Lendman liked it better? He wants the Muslim Brotherhood to gain power? They're not really so bad, because they renounced terrorism, unlike their devil's spawn Hamas? Of course, it's not terrorism to invade and exterminate Israel, it's a religious thang. Face it, the U.S. can't cure Egypt's basic ills of addiction to the mental virus of ISLAM without a massive invasion followed by taking the children away for a generation and giving them free Islam-free secular education. But that option's not on the table with Lendman, because what he really wants is an Iranian-style revolution that turns Egypt into a new weapon against Israel so that his Saudi funders get their money's worth. His love of calling Mubarak's regime "thuggish" is laughable in the face of his silence about Islamic regimes including Saudi Arabia and Iran, or the horrible anti-Jewish hate spewed by Palestinians, whom he paints as angels. The few billion a year the U.S. spends on paying jizya to Egypt and other Islamic countries to keep them from attacking and losing again to Israel isn't the root cause of Egypt's problems, but it can sure be cut off when they renege on their peace treaty with Israel. Lendman's sick twisted belief that the U.S. is always the bad guy won't work with Islam, because its evil is far more ancient and terrible than anything the West can even think of, sorry. All they need to prove it is to get their hands on some nukes, which we can't allow, so hopefully Obama will soon pass and a new president who loves America can finally order the much-needed invasion of Iran to dismantle its WMDs. Ironically, anybody in Egypt who chucks Islam is subject to the death penalty, no matter what regime is in power, or a hit by a Muslim per a fatwa from a cleric, which the govt. won't lift a finger to stop or prosecute. Egypt's problem isn't the U.S., it's Islam, sorry.