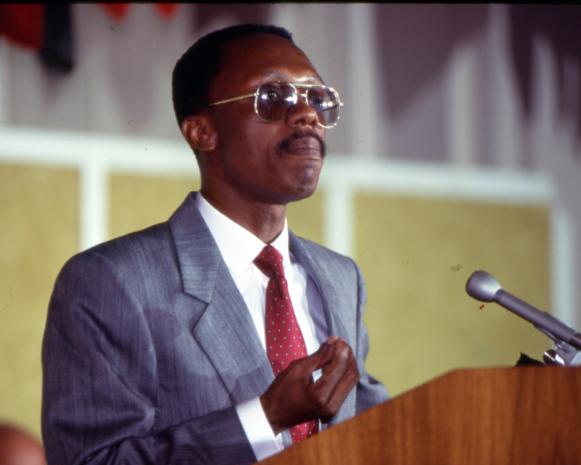 Two recent articles discussed his eagerness to return, accessed through the following links:

He explained he's "ready....today, tomorrow, at any time. The purpose is very clear: To contribute to serving my Haitian sisters and brothers as a simple citizen in the field of education."

After six eye surgeries in the past six years, it's also vital for health reasons. He experiences extreme winter pain and risks complications causing blindness. In addition, Haitians want him badly, mainly for his powerful inspirational presence. It's why so far Washington denied him, wanting no one interfering with its imperial agenda.

Grassroots activism, however backs him. On January 28, 2011, the Global Women Strike.net site posted Selma James' letter to the UK Guardian, accessed through the following link:

It headlined, "US blocking Aristide return to Haiti," saying:

"WikiLeaks confirms what grassroots people have been saying," what most Western media suppress, including the Guardian's Rory Carroll. However, on January 21, Haiti Liberte's Kim Ives' Guardian article headlined, "WikiLeaks points to US meddling in Haiti," saying:

James, however, expressed support, saying "If Haitians are to rebuild their country and their democracy, Washington, not Aristide, must be kept out."

On January 31, attorney Ira Kurzban, representing Aristide, wrote Haiti's Interior and Foreign Affairs Ministers, requesting a diplomatic passport be issued immediately to facilitate his return at once. He also requested security be provided, according to Haitian law.

On February 7, BBC reported that:

"The Haitian government says it has issued former President Jean-Bertrand Aristide with a passport, opening the way for his possible return. A government official told the AFP new agency the diplomatic passport had been issued on Monday," February 7, saying: "All the formalities have been completed."

However, Ira Kurzban said he hadn't received it then or had Haitian authorities informed him of its issuance. He added that "I think we're getting closer, but we're not there yet."

On February 9, however, AFP said:

"A new Haitian passport was on Tuesday handed to Jean-Bertrand Aristide's lawyer, smoothing the way" for his return, according to Interior Minister Paul Antoine Bien-Aime. "Administratively on the Haitian side, there is no obstacle to (Aristide's) return," he added.

So far, however, Kurzban's given no confirmation of receipt. Most important, unless and until Aristide safely arrives, public statements remain rhetoric, not policy.

On February 7, Haiti Libre said Kurzban was in Port-au-Prince, facilitating the process to expedite Aristide's return. However, in a Telesur interview, Maryse Narcisse, his spokesperson said:

"At the moment, former President Aristide is in South Africa, ready to return home. It can be today, tomorrow, or as soon as possible." Once passport documents are issued, it "depends on the South African government." Both governments need to cooperate "to facilitate his return." However, their actions depend on Washington's.

News about Aristide getting a diplomatic passport "is rattling Haitian democrats, and understandably so...The last thing Haiti needs is the return of a tyrant whose stock-in-trade was sowing violence."

Readers expecting truth in Journal op-eds know all of it is uncompromisingly suppressed, the above comments some of many for proof.

Others are similar, suggesting Aristide's return presents Washington "with an opportunity to revisit allegations about his honesty when governing Haiti," saying "he may have been killed if not for US help in fleeing the country."

The piece also revisited bogus charges that he "encouraged, protected, participated in and profited from illegal drug trafficking in and through Haiti."

"these (and other) false stories of corruption against President Aristide are part of a continuing disinformation campaign against (him) that began when he first took office in 1991." They never stopped and continue to this day.

An earlier article debunked these and other falsehoods, accessed through the following link:

It exposed spurious charges, corporate disinformation, and compromised writers bankrolled to vilify Aristide, the only true democrat Haiti had in over 200 years. It's why US marines abducted him at gunpoint, exiling him forcibly to Africa. Thereafter, Washington kept him out. Preval and South African President Jacob Zuma can't decide otherwise. Obama has final say and he's silent so far.

America has full control, colonizing Haiti for profit, plundering its resources, exploiting its people, and for seven years denying Aristide's right of return, affirmed in international law. Whether or not policy now will soften isn't clear. Perhaps shortly we'll know, but as long as Haitians revere him, Aristide remains vulnerable to malicious Washington agitprop and supportive media attacks, like other democrats vilified for governing responsibly.