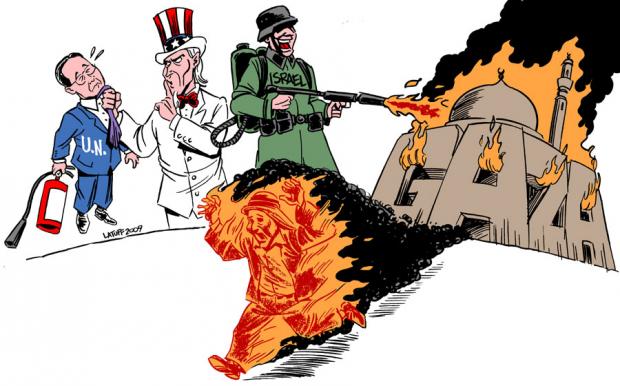 In fact, repression throughout the Middle East is largely ignored except some reporting on protests in Tunisia, Yemen, Jordan, and Algeria, but they've faded with focus mainly on Egypt.

Though important, most Arabs live in 21 other countries and territories from the Atlantic Ocean to the Arabian Sea, from the Mediterranean Sea to the Horn of Africa and Indian Ocean on two continents. Their combined populations approach 340 million people, most of them denied freedom and dignity for centuries.

Their plight stretched from Ottoman 16th century rule through WW I, then British and French control, and now America and Israel. They're ruling hegemon partners, mainly Washington, of course, allied with its key regional partner. Together, they virulently oppose Arab nationalism and democratic freedoms. Edward Said once explained that:

"The basic premise of Arab nationalism in the broad sense is that, with all their diversity and pluralism of substance and style, the people whose language and culture are Arab and Muslim (the Arabic-speaking peoples) constitute a nation and not just a collection of states scattered between North Africa and the western boundaries of Iran."

However, any "independent articulation of that premise was openly attacked," by the French, British, Americans, and Israelis through wars and repressive occupation and dispossession of indigenous Palestinian people.

Washington and Israel especially remain deeply hostile to Arab nationalism and attempts to unify Arabs politically. Their goal, in fact, is divide, conquer and control, redrawing the Middle East to suit imperial, not Arab interests. They thrive on "Arab fragmentation, collective inaction, and military and economic weakness," Said explained.

He also said Arabs largely never achieved collective independence in "whole or in part" because outside powers coveted their lands and resources. For over half a century, in fact, Washington based its Middle East agenda on three policies:

-- assuring Arab states remain reliable vassals, Egypt especially as the region's lynchpin but also Palestine under leaders it controls along with Israel.

Said called it "an unprecedented crisis. Unprecedented means are therefore required to confront" what he said was "a wholesale attack....by an imperial power, America, that acts in concert with Israel, to pacify, subdue, and finally reduce (Arab peoples) to a bunch of warring fiefdoms whose first loyalty is not to their people but to the great superpower" under puppet rulers enriching themselves at their expense.

Kings do it. Shekh leaders do it. Mubarak did it, and so don't Mahmoud Abbas, Salam Fayyad and other key Palestinian Authority (PA) fellow travelers, profiting at their own people's expense as reliable Israeli enforcers.

In fact, they cooperate actively in pursuing, facilitating, or ignoring systematic attacks against civilians and property in Occupied Palestinian communities. As a result, a typical week resembles late January through early February, including:

-- other bombings of a Gaza medicine factory, setting it ablaze, and attacking a metal workshop in northern Gaza; at least 10 injuries overall were reported;

-- announced plans for an electric security barrier to wall off Egypt; and

In the West Bank and East Jerusalem, daily life involves severe movement and speech restrictions, including 585 permanent roadblocks, manned and unmanned checkpoints, and closure or militarized control of around two-thirds of all main roads between 18 Palestinian communities. Overall, about 500 km of West Bank roads are restricted, and about one-third of the West Bank, including East Jerusalem, is inaccessible to Palestinians without IDF-issued (very hard to get) permits.

This is how police states work, daily responsible for crimes against humanity, especially against those who dare resist. As a result, Palestinians suffer grievously, largely out of sight and mind, more than ever perhaps with world attention on Egypt.

For them, daily life involves militarized repression, police state harshness even more brutal than Mubarak's because the entire population suffers, especially besieged Gazans, suffocating under near total closure for over three and a half years, except for restricted exceptions.

"The problem is getting fuel to the border inside Egypt. There are no military forces on the Egyptian side....so smugglers are getting hijacked on the road from Cairo and all their stuff (is) stolen. It's very dangerous for them...."

"There is nothing coming through the tunnels now." Only limited fuel amounts are available at triple the recent price. Without relief, it means "no cars, but also no electricity," that's already in short supply, forcing widespread use of fuel-powered generators.

"This unit, especially, is entirely dependent on electricity. If there's a power cut we have to operate the ventilators manually before the generator kicks in. There are power cuts here for four hours every day. It will be impossible to keep people alive without our generators - the monitors, the ventilators, everything - will be gone."

"People in need of radiotherapy, and advanced surgery in particular, are simply unable to get treatment. While Rafah is closed, we will see increased loss of life here in Gaza."

On February 9, IRIN said tunnels resumed supplying petrol, a week after it was cut off. However, Egypt's crisis means everything is uncertain, including high prices making vital supplies unaffordable for many. In addition, Rafah remains closed, affecting patients unable to reach Egypt for treatment. WHO's Gaza officer in charge, Mahmoud Daher said:

"In cases of closure, like we're seeing now," patients without Israeli permits to leave "struggle to get adequate health care in Gaza. The longer Rafah remains closed, the higher the possibility that these patients' prognosis will be affected. This is a very worrying situation." It promises to stay that way as Egypt's uprising shows no signs of ebbing.

Correspondent Stefanie Dekker said there's "even an Internet campaign aimed at mobilizing thousands of expatriates to return and support the uprising." Activist Ahmad Salah told Al Jazeera that protesters are "more emboldened by the day....This is a growing movement, it's not shrinking."

Whether or not Egyptians prevail, besieged Gazans face increasing hardships heading toward crisis conditions if essential supplies and services remain spotty or unaffordable. Yet media reports largely ignore them. Even Al Jazeera offers only occasional accounts.

A brief February 9 one headlined, "Egypt events spark Gaza fuel panic," saying Gazans scrambled to make due best they can in coverage running barely over two minutes compared to hours devoted to Egypt.

It's nothing new for Palestinians. They've suffered mostly in silence. Major media coverage largely ignored them for decades, except during two Intifadas and Israeli wars when unjustly they were called terrorists, not heroic freedom fighters, struggling for rights long denied them.

They still do out of sight and mind in most Western societies, especially Americans given carefully filtered managed news, infotainment and junk food news. It leaves large majorities out of touch and uninformed, believing fantasies opposite of realities, including aggressive wars called liberating ones against people only yearning to be free.

It's no exaggeration saying millions across North African and Middle East countries harbor decades of pent up anger, expressed powerfully by courageous Egyptians after 16 days of protest showing no signs of ebbing. It's also true that Washington maneuvers plan new faces under old policies, creating the impression of change, a longstanding scheme initiated numerous previous times, usually successfully, and odds favor it this time.

As a result, it's hard distinguishing between pro and anti-reformists pretending to want change, perhaps including made for television heros. The latest one comes to mind without knowing whether or not he's credible. At least, be wary. Accept nothing at face value. What's portrayed publicly may be more fiction than fact, so viewers should demand proof. Without it, remember numerous past times manufactured heros were fakes, but don't conclude it arbitrarily.

Who, in fact, is Ghonim, a fair question since he practically emerged out of thin air, and overnight become a prime catalyst of revolt? He's Google's Middle East/North Africa head of marketing, who in January, created the Facebook "We Are All Khaled Said" page, honoring the young Egyptian blogger beaten to death by police last June.

"Pray for #Egypt. Very worried as it seems that government is planning a war crime tomorrow against people. We are all ready to die #Jan.25."

For days, no one knew his whereabouts until learned authorities held him. On February 7, 12 days later, he emerged unharmed, and on Dream 2, a private Egyptian channel, gave a highly emotional interview, admitting he administered the Facebook page.

He also created Mohammed ElBaradei's official web site, the former IAEA head who suddenly parachuted into Egypt after living outside his native country for 30 years. Did he come voluntarily, or was he brought, perhaps serving America's imperial agena, another unanswered question.

For many in them, Egypt's jails operate like roach motels, those entering disappear after lengthy torture/ interrogations. Ghonim, however, said he wasn't harmed, just kept blindfolded incommunicado, his family unaware what happened.

After release, he said many others contributed to the Facebook page, adding, "This was a revolution of the youth of all of Egypt. I'm not a hero," endearing him to protesters.

Though so far no evidence suggests it, at issue is whether a Google executive "Internet activist," in fact, was enlisted for his role. If so, it wouldn't be the first time made-for-television heros were, in fact, villains. Hopefully, he's not the latest, but be wary until known for sure.

"The basic premise of Arab nationalism in the broad sense is that, with all their diversity and pluralism of substance and style, the people whose language and culture are Arab and Muslim (the Arabic-speaking peoples) constitute a nation and not just a collection of states scattered between North Africa and the western boundaries of Iran."

Right, Arab AND Muslim. No wonder the West has been not only suspicious but fearful of the Arab world's intentions to this day. If they'd drop the Muslim part, they'd be accepted with open arms into the human race. Unless and until that happens, they deserve to be world pariahs subject to a quarantine, and isolated from the civilized non-Muslim world. Sorry, Lendman, you're on the wrong side of history.