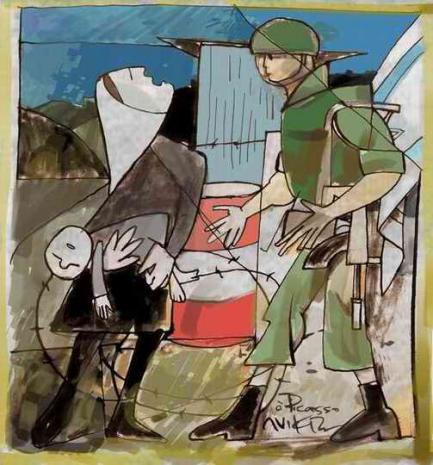 Marching in Ramallah with Egyptian flags, they publicly supported them "(f)or the first time since the beginning of the(ir( uprising...." Another Ramallah demonstration followed as well as a Bethlehem one.

On February 4, the Popular Committees Against the Israeli Occupation issued a press release saying:

"The Egyptian Arab nation....We salute this great Arab nation, our brothers. This is the salute of freedom from the people of Palestine who have been fighting for decades for freedom and independence, and to retain the honor of Arabs."

"The Palestinians are watching what is happening across the Arab world in general and Egypt in particular with great pride....We hope that the rebelling Arab people make it their priority to demand from any government or leadership to come to sever their ties with the Israeli occupation and abandon the Egyptian - Israeli peace treaty....We call on all free nations in the world, especially Europe and the US, to get out in massive demonstrations on 2/11/11 to confirm the right of peoples to live in freedom and dignity - a day of anger" for justice, the "beginning of the Global Intifada."

Instead, it "banned demonstrations in solidarity with the rebelling peoples. Palestinian television has virtually ignored the events in Egypt." Demonstrators at Cairo's Ramallah consulate were monitored by plainclothes security forces.

"What is the (PA) afraid of....?" It has close ties with Mubarak like Israel, and "when a regime is insufficiently democratic, it fears that popular demonstrations might spin out of control."

In fact, Abbas/Fayyad security forces work cooperatively with Israel against it, enforcing occupation harshness. They've been well trained and financed to do it. A previous article explained, accessed through the following link:

Governing as political opportunist traitors, their Mubarak moment awaits them, perhaps sooner than they imagine for exploiting and betraying their own people, including attacking peaceful protesters.

"We had not yet done a thing. A number of policemen in uniforms began arguing with one of the demonstrators, apparently on purpose, so as to create a pretext for arresting him. They took his identity card and then began dragging him in the direction of the police station."

Human Right Watch (HRW) said PA policemen were joined by detectives, preventive security force personnel and others from general intelligence, "all of them plainclothesmen." They beat, kicked and dragged demonstrators away violently. Numerous arrests were made. Photograph-taking was prohibited. Cell phones and cameras were confiscated, and PA forces videotaped events, wanting activists identified for later arrests and detentions.

Their numbers, however, grew to about 2,000, marching and chanting the slogan heard in Tunisia and Egypt:

On February 5, hundreds of Bil'in residents, joined by international and Israeli supporters, protested in solidarity with Egyptians and Tunisians. Calling for national unity, Israeli troops attacked them with tear gas and concussion grenades.

Gathering in Bil'in center for their weekly Friday demonstration, they marched toward Israel's Separation Wall, what they call the Annexation Wall on village land. Their public statement said:

(1) "We salute the Egyptian and Tunisian people" in solidarity with their struggle for freedom;

(2) "We call for national unity and the preservation of civil peace (to) pass this historic stage successfully;"

(3) "We hope that rebelling Arab people make it their priority to demand from any government or leadership to come to sever their ties with the Israeli occupation and abandon the Egyptian - Israeli peace treaty" that ignored Palestinian people, leaving them occupied and repressed under militarized harshness.

(4) "We call on all free nations in the world" to rally in solidarity with Arab people struggling to be free.

From his perspective, Omar Barghouti, a founder and director of the Palestinian Campaign for the Academic and Cultural Boycott of Israel, expressed no surprise how PA forces reacted, saying:

"Unelected, authoritarian regimes tend to stand together. They are very scared of popular mobilization especially in light of the Palestine Papers. (They) agree on repression and have no interest in empowerment of people or mobilization."

When children throw stones at tanks entering neighborhoods it's called "Disturbing the peace." When they're detained for resisting occupation, it's called "Restoring order."

"The occupier oppresses, the occupied people overcome their instincts and their struggle, and good order is maintained - for now. Stability."

Egyptians dared "disturb the peace," undermining Middle East stability. "Indeed, that stability should be undermined" throughout the region, including in Occupied Palestine. How else can oppressed people be free. Stability suffocates them. Resistance is liberating if sustained long enough.

Egyptians and Tunisians made a good start, but their struggle has just begun. When will Palestinians begin theirs? When tanks invade neighborhoods, "stones must be thrown at (them); the infuriating stability of the Middle East must be wiped out," replaced by liberating freedom, perhaps contagious enough to spread regionally, but never easily, quickly or without great risks and costs.

Egypt's outcome has regional implications, including in Occupied Palestine, especially given Mubarak's cooperative role with Israel and Washington. As a result, PA officials noticeably distanced themselves from uprisings in Egypt, Tunisia, Jordan, Yemen and Algeria, fearing soon one may target them. They've also aggressively cracked down to prevent it through violence, intimidation and arrests.

So far, it's worked, but for how long. Egyptians endured three decades under Mubarak. In 1948, Palestinians lost their homeland, and for nearly 44 years suffered brutally under militarized occupation, exacerbated by collaborating PA enforcers.

Perhaps Egyptian courage will inspire them to summon theirs for liberating freedom under leaders they choose.

"Khaled (a pseudonym) had become something of an online sensation in Gaza, but is now effectively living in hiding" for his safety after cooperatively creating the Gaza Youth Manifesto for Change, "a 450-word tirade against the frustrations" of occupied life under siege. Posted in December, it has over 19,000 followers under the name Gaza Youth Breaks Out.

Everyone is pilloried, including Hamas, Fatah, Israel, Washington, and the UN, saying:

"We, the youth of Gaza, are so fed up (with) occupation, the violations of human rights and the indifference of the international community!"

Is Manifesto passion a prelude to mass street protests throughout Gaza, the West Bank and East Jerusalem, matching breathtaking Egyptian courage. It's how freedom at times is won, but never easily, quickly or longstanding without sustained vigilance to retain long-fought, hard-won gains, easily lost otherwise.

Numerous previous times, longtime insider Bob Chapman made impressive calls, often before others noticed. On air February 10 on the Progressive Radio News Hour, he said Washington overplayed its hand in Egypt. Now it has a tiger by the tail perhaps too hard to control and will end up losing its regional grip when events finally play out.

Others agree, including Immanuel Wallerstein in his February 3 article headlined, "The Second Arab Revolt: Winners and Losers," saying:

Months will pass before they're known. At this point, events are fluid, outcomes uncertain. Yet he calls Washington the "great loser," Iran the biggest winner, then Turkey for supporting the Arab revolt and confronting Israel.

Indeed, it's too soon to know, but it may be the right side of history. If so, it'll defy long odds favoring power over populist uprisings, an exception perhaps proving the rule if gains hold and aren't lost because of lack of eternal vigilance.

Note: Fast-breaking events in Egypt will be discussed in a forthcoming article. Things aren't always as they seem. Below the surface maneuvers, manipulation and machinations are far more important than what's visible on the surface. Major media reports, of course, won't explain. Real journalism and analysis are essential. Focus on them and Al Jazeera's online stream for up-to-date news.

Instead of wasting your time on this Arab-funded junk that celebrates the systematic surrounding and extermination of Israel as a liberation movement, watch this Glenn Beck vid exposing the utter ignorance of the Obama admin. about the evilness of Islam and the Egyptian Muslim Brotherhood, whose members are itching to be let loose to kill Jews for Allah:

Lendman thinks Americans have the word dumb--s stamped on their foreheads, not realizing that Israel's destruction would solidify Islam and lead to a new caliphate, with the power to restart the jihad against the non-Muslim world, which, combined with nukes, could result in the death of billions. This is this liberation movement that he's hawking for the Muslims and/or international leftists who are their allies as far as anything they do weakens America, the so-called imperialist power that spreads the evil ideology of Washington, Adams, and Jefferson.