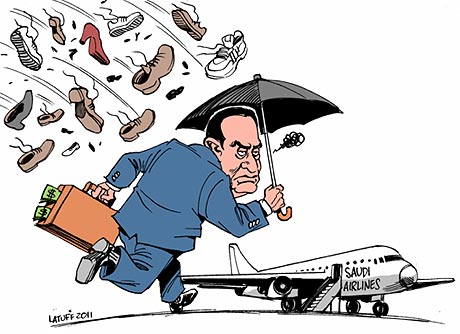 What's unfolding looks different than what protesters demand. World headlines partly reflect it, mostly outside America, especially on US television reporting an illusion of change, when, in fact, coup d'etat rule is in charge, headed by authoritarian generals used to giving, not taking orders.

Scuffles broke out "as soldiers tried to remove activists from the epicenter of Egypt's uprising...." Hundreds courageously remained, saying they won't leave until "more of their demands are met."

As a result, "(S)oldiers shoved pro-democracy protesters aside to force a path for traffic to start flowing through Tahrir Square for the first time in more than two weeks."

"I think it reflects a bigger problem, that the military believes that now Mubarak is out, it's time for stability. But some of the protesters think not enough has been done yet. They don't want to clear that square until the army (is) handed over to a civilian government."

"If the army does not fulfill (them), our uprising and its measures will return stronger."

-- Mubarak's cabinet and all remnants of his regime ousted, especially top officials like Omar Suleiman, a hated man they'll never accept in any capacity;

-- an immediate end to Egypt's Emergency Law, a harsh police state measure since 1981;

-- dissolution of its parliament in place after rigged late 2010 elections;

-- a transitional five-member presidential council made up of four civilians and one military person to prepare for free, fair and open democratic elections in nine months or sooner;

-- abolition of military and emergency courts;

It's not happening, a cabinet spokesman saying no major reshuffle will occur, adding:

"The shape of the government will stay until the process of transformation is done in a few months, then a new government will be appointed based on the democratic principles in place."

A senior army officer announced on state television that the military will "guarantee the peaceful transition of power in the framework of a free, democratic system which allows an elected, civilian power to govern the country to build a democratic, free state."

Take those comments with a grain of salt as well as most other official statements, concealing what's likely planned. Nonetheless, on February 13, Al Jazeera said military officials dissolved parliament, suspended the Constitution, and announced September elections, giving no other specifics.

What it means remains to be seen under militarized coup d'etat rule. It assures no democracy as long as it lasts and none afterwards if likely manipulated elections follow, leaving generals in charge behind the scenes.

Military rulers also pledged to honor "all regional and international obligations and treaties." That one's likely true to avoid confrontations with their Washington paymaster and Israel after nearly four decades of peace.

"I'm worried about the future. Nobody knows what's coming. We need to rebuild our country and economy because we are venturing into the unknown."

Indeed, they've got great reason to worry because what's planned won't tolerate real democracy, only its facade as in America, Israel, and most other states. For sure expect none in Egypt and other Arab countries controlled by imperial Washington.

"There is a tense stand-off in Cairo's Tahrir Square as protesters who have camped there for 20 days thwart army effort to clear the area."

Moreover, thousands more joined them after military police head, Mohamed Ibrahim Moustafa Ali, said, "We do not want any protesters to sit in the square after today."

As a result, anger grew as they saw "hundreds of policemen (enter) the square," chanting: "It's a new Egypt, the people and the police are one." Crowds chanted back: "Get out, get out!" Scuffles then broke out, BBC's Paul Danahar saying:

"There was growing anger in the square as more soldiers began slowly but forcefully to squeeze the protesters out of the areas they had been holding for weeks. Then a roar went up from the crowd as they realized hundreds of policemen had entered the square," the same ones who attacked, gassed, beat, and arrested them days earlier. "There was a tense stand-off as the two sides confronted each other before the police" moved back and left.

Using loadspeakers, protesters said: "They must respond to our demands," (not) remove us from the square." They explained that some of their leaders were detained, dozens more taken to an army holding area near Egypt's museum.

"The first priority, no question about it, is security. An equally important priority is to provide the elements needed for the daily life of citizens."

"We stood by the army in their revolution (the 1952 coup toppling King Farouk). They need to stand with us in ours. The goal was never just to get rid of Mubarak. The system is totally corrupt and we won't go until we see some real reforms," one protester adding, "I am going to be buried in Tahrir. I am here for my children. Egypt is too precious to walk away now."

Another said, "I was going to leave today, but after what the military has done, the millions will be back again. The corrupt system still stands. It has gone back to using the only thing it understands - force. If we leave, they won't respond to our demands."

London's Guardian, Telegraph, Independent and other newspapers featured the same story about protesters refusing to leave.

"All day, the demonstrators had been telling the soldiers that they were brothers. Well, we shall see." Assuming power, "a series of contradictory (military) statements (followed), indicat(ing) that Egypt's field marshals, generals and brigadiers were competing for power in the ruins of Mubarak's regime."

Pro-democracy supporters "are thus now less important than the vicious infighting within the army." In fact, Egypt's military high command was part of Mubarak's regime. His vice president, prime minister, deputy prime minister, defense minister, and interior minister were all generals. So was Mubarak.

"Sadly," said Fisk, "Egypt is the army and the army is Egypt....It therefore wishes to control...." Its rhetoric stresses normalcy, leaving affairs of state to them to establish reforms. In fact, they intend "divid(ing) up the ministries of a new government," to solidify military control, whatever new faces emerge.

Fisk recalled celebratory outbreaks after WW I ended. Everyone "burst out singing." It was "genuine and deserved. Yet that peace led to further immense suffering." Unless pro-democracy advocates stay vigilant and keep protesting, expect weeks of sustained courage again ending in tears, Fisk saying:

Rhetorically, (t)he army has decided to protect the people. But who will curb the power of the army," hungry to get power portfolios now that they're up for grabs.

After 30 years under Mubarak, they're making demands they want met. Egypt's military now runs the country, its future to "be shaped by three powers: the military, the protesters, and the sprawling autocratic infrastructure of Mubarak's regime" still in place, including "the bureaucracy, the police, state media and parts of the economy."

Despite promising change, "elderly generals are no reformers, and their move to push out Mubarak may have been more to ensure the survival of a ruling system the military has (controlled) since a 1952 army coup." The powerful, "deeply secretive military has substantial economic interests, running industries and businesses that it will likely seek to preserve."

"As a new era dawned in Egypt on Saturday, the army leadership sought to reassure Egyptians and the world that it would shepherd a transition to civilian rule and honor" all international commitments and obligations. Though protesters want democratic change, they "embraced their new reality with humor, mild arguments and celebrations," quoting one of their leaders, Amr Hamzawy, saying the military's tone has been "very, very positive."

"The announcement went a long way toward meeting the demands of protesters," when, in fact, specifics are absent, most demands haven't been met, Mubarak regime officials remain, and militarized coup d'etat control is in charge. Four words only mentioned protests: "(P)ockets of protests continued," the article stressing "normalcy return(ing) to the capital...."

The Los Angeles Times reported, "Tents give way to traffic in Tahrir Square," reflected "the military's determination to restore normalcy to the nation's capital."

The Chicago Tribune headlined, "A reborn Egypt gets back to business....tingling with freedom, look(ing) ahead," quoting one protester, Ragab Abdou, saying: "I woke up with the idea that we can do something. Democracy. Freedom. Do something we haven't done for 30 years." They haven't done it now either, an explanation the Tribune omitted.

"Some weary demonstrators evacuated voluntarily. Others stood their ground or scuffled with soldiers," implying they might be agitators, not committed pro-democracy fighters.

It wants "to restore order after weeks of mass demonstrations," quoting Egypt's new military rulers pledging "a peaceful transition of power in the framework of a free and democratic system." No timetable or specifics were given.

For now, entrenched military rule will "oversee a political transformation" in its own image far different from democratic change. Savvy protesters fear it, vowing to continue struggling until their demands are met. They're far from being free and won't be without sustained mass grassroots pressure, the only way change ever comes, never from the top down anywhere.