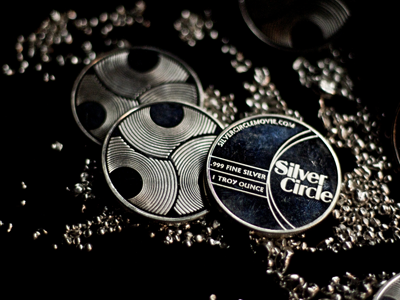 Other large scale conservative media machines were also mentioned like Andrew Breitbart’s Big Hollywood as well as Pajamas TV.  Silver Circle boasted 3 paragraphs about their upcoming film stating that it “the film incorporates a familiar libertarian--‐ conservative theme: Not only is the U.S. economy tanking, but the Federal Reserve has become too powerful and unwieldy to serve the people's best interests. It is set in a future dystopia, with a love story to boot.”

The film took to the convention in a guerilla marketing fashion, passing out flyers and stickers all over the hotel floors. People walked around flashing their silver sticker that resembled a 1 troy ounce silver round. The interest grew as the convention continued. Our Facebook numbers grew as well as Silver Circle’s reception!

The film will be released this Fall. The goal is to make it in time for the Sundance Film Festival deadline.