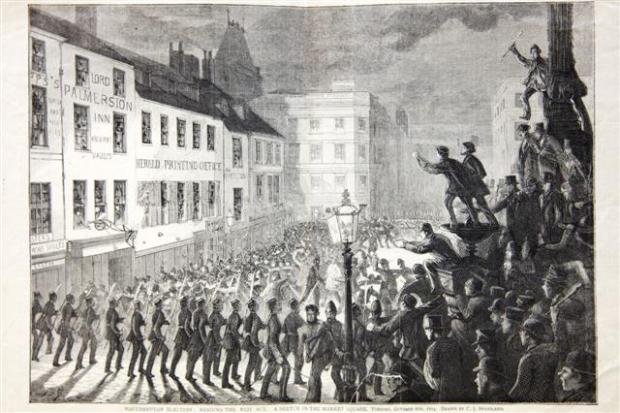 Many left "but a hardcore refused, saying they would remain until the army took a series of steps toward democratic reform including installing a civilian-led government and abolishing the repressive" Emergency Law, in force since 1981.

Instead, communiques have said chaos, disorder and strikes are prohibited, an ominous police state sign tolerating no dissent for an indefinite period. In other words, new faces are enforcing Mubarak-style despotism if harsh crackdowns follow.

Many pro-democracy supporters were alarmed, including Mohamed ElBaradei saying "We need heavy participation by the civilians. It cannot be the army running the show." One of the protest organizers, Mahmoud Nassar, said demonstrations will continue, adding:

"The revolution is continuing. Its demands have not been met. The sit-in and protests are in constant activity until the demands are met. All are invited to join."

Those who held out out were cordoned by military police and soldiers, then told to leave under threat of arrest. One there said:

"We have half an hour left, we are condoned by military police. We don't know what to do. We are discussing (it) now. (They) told us we have one hour to empty the square" or else.

Egypt's military removed them to consolidate "their control over what it has called a democratic transition" from Mubarak's authoritarian rule. "How completely the military will deliver on its promises of a transition to a constitutional democracy will not be clear until the election," announced in six months with no specific date.

On February 14, Haaretz said "(s)oldiers scuffled with protesters....as the army sought to ensure traffic flow through the central Cairo square." Friday may prove decisive when a huge "Victory March" is planned, "perhaps remind(ing) the military of the power of the street" against which it has plenty of its own to exert.

Everything so far is uncertain, including:

-- transition to civilian rule if it comes and when;

-- a revised or new constitution if there is one with real democratic changes;

-- open, free and fair elections if they're held;

-- and other protester demands.

"The two big questions now are who is going to be on the constitutional committe to redraft (a new document), and are there any guarantees that what they come up with is then going to be deemed the way ahead," according to protester demands. So far, uncertainty and gray areas remain.

Some believe that transitioning to democracy won't be easy after decades of authoritarianism. Old ways die hard, including military rule, fraudulent elections, rampant corruption, and police state harshness against dissent.

For now, unease grips the country. Pro-democracy activists remain committed, but most so far dispersed. On Monday, however, hundreds of employees demonstrated outside a Bank of Alexandria Cairo branch, urging their bosses to "Leave, leave," echoing their anti-Mubarak chant.

Other protests, sit-ins and strikes occurred at state-owned institutions across Egypt, including the stock exchange, textile and steel firms, media organizations, the postal service, railways, and Culture and Health Ministries. An array of grievances were aired, but authorities now prohibit public actions.

What began peacefully turned harsh. "Military policemen in red berets....emerged to control traffic. But then a young officer began lashing demonstrators with a cane - old habits die hard in young men wearing uniforms - and for a moment there was a miniature replay of the fury (displayed by) the state security police here on 28 January."

At issue is whether ousting Mubarak handed control to generals "who achieved their power and privilege under" him. Also, no specific election date was announced nor if it'll be open, free and fair as promised. Moreover, though military council authorities said its power will last six months, it's unknown if they'll renew or extend it indefinitely.

"But a clear divergence is emerging between the demands of the young men and women who brought down the Mubarak regime and the concessions - if that is what they are - (if) the army (is) willing to grant them." The combination of emergency and martial law power leaves the military free "to ban all protests and demonstrations as Mubarak" decreed. So far at least, plus ca change indeed!

Hints but No Confirmation of Coming Changes

Al Jazeera and other reports say ruling Egyptian generals gave indications of moving rapidly to amend the constitution by popular referendum and share power with civilians, according to Britain's Foreign Secretary William Hague. He said Prime Minister Ahmed Shafik told him he'd reshuffle his cabinet ahead in weeks to include opposition figures.

They "told a coalition of young opposition leaders that they plan to convene a panel of distinguished jurists to submit a package of constitutional amendments within 10 days for approval in a national referendum within two months...." At the same time, they reacted angrily to strikes and public demonstrations, including by state workers, ordering them stopped.

At issue, of course, is whether promises mean real change or whether what's coming is more pretense than reform. Remain skeptical as events unfold, accepting nothing on face value. Real democracy excludes generals. Their presence under martial law is very worrisome.

"Except for Mubarak, the army remains in charge, (and) the fundamental warp and woof of Egypt is intact. We've not had a dramatic sea change....I don't know what (generals mean by) democracy." Anything ahead is possible, but rhetoric doesn't explain. "Pay very little attention to (what's being said) at this point. Even as we saw (earlier), we didn't have to pay attention to what Mubarak said. So let's take a look at the objective situation. Let's forget all the statements and so on."

Egypt's army is in full control. It's the nation's "central institution" and its most powerful. "Do I expect an election in which a dramatic change takes place in who (gets) elected? I suspect not, but (then) I'm not even sure when elections" are coming. All that's clear is that generals are in charge. They'll pretty much do what they want as they've always done.

In a follow-up commentary, Friedman said post-Mubarak, "the military regime in which he served has dramatically increased its power. This isn't compatible with democratic reform."

At this point, we don't know what's ahead. However, "(p)ower rests with the regime, not with the crowds. In our view, the crowds never had nearly as much power as many have claimed." Dispersed, for sure they don't, and once energy ebbs, reenergizing it isn't easy, especially if military forces abandon friendliness for harsh crackdowns.

What happened so far wasn't a revolution. The military-controlled regime remains in tact, solidified by coup d'etat rule. Only Mubarak's gone. A powerful junta remains. It's run Egypt for decades. It's hard imagining they'll stop in six month, perhaps ever unless real revolutionary change forces them. So far, it's nowhere in sight, but possibly could emerge. As Friedman explains:

"N)othing much has really happened in Egypt. It doesn't mean that it won't, but is hasn't yet. An 82-year-old man (was deposed), and his son will not be president. The constitution and parliament are gone and a military junta is in charge. The rest is speculation." Indeed so, especially against raw military power if unleashed.

So far, little in Egypt changed. Its military remains in charge, governing by martial and emergency law rule. Curfews are still enforced, shortened from 10 to six hours nightly. Diktats are being issues, called communiques, Mubarak's appointed Prime Minister Ahmad Shafiq saying, "There is no change in form, or method, or the process of work. Matters are stable completely." Protests, unrest, instability and chaos will face crackdowns. No permanent Gaza border opening is planned.

Soldiers "told us to go. They removed our tents but we will stay. We want another government. We need civilian government. They want to steal our revolution."

"This is a revolution, not a half-revolution. We need a timetable for elections. We need an interim government," not one by generals. "We need a (civilian) committee for a new constitution. Once we get all that, then we can leave the square."

Reports said skirmishes broke out. At least 30 arrests were made. Detainees were taken to a military compound near Egypt's museum where others arrested earlier were beaten and tortured.

Others worry that military authorities won't keep promises, including ending martial and emergency law rule. They're part of Egypt's ruling class aligned with business, other elite interests, Washington, Israel and the West.

Under Mubarak, they were hostile to social, political and economic demands, including human and civil rights, better jobs, higher wages, improved living conditions, and democratic reforms. Why now should they change, including by fulfilling promises perhaps made to be broken?