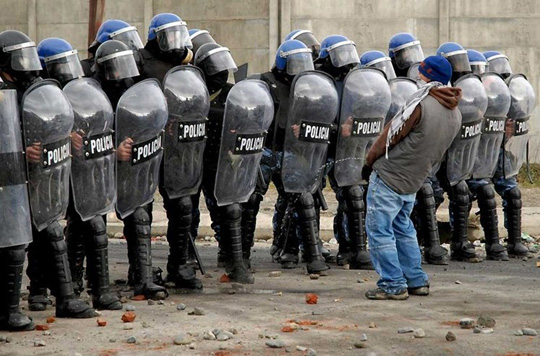 They continue in Egypt, Yemen, Algeria, Tunisia, and most recently in Iran and Bahrain, Al Jazeera saying:

"At least one person has been killed and several others injured after (Bahrain) riot police opened fire at protesters holding a funeral service for a man killed (a) day earlier."

On February 15, Al Jazeera's unnamed correspondent for his safety said:

"Police fired on the protesters this morning, but they showed very strong resistance. It seems like (a) funeral procession was allowed to continue, but police are playing a cat-and-mouse game with protesters."

"The US State Department began sending Twitter messages in Farsi on Sunday in the hope of reaching social media users in Iran."

US tweets also called on Iran "to allow people to enjoy the same universal rights to peacefully assemble and demonstrate as in Cairo," what's viciously attacked when Americans protest against globalization, IMF and World Bank injustice, as well as Republican and Democrat party conventions over legitimate political and social justice grievances.

Washington's policy is do as we say, not as we do, including its imperial wars, torture and other civil and human rights abuses committed globally, including at home.

The Yemen Post said, "Police and bullies hurled stones at the protesters fed up with bad living conditions, high unemployment rates, widespread corruption at the public institutions and oppression. They also beat them with stun batons, and police fired live ammunition in the air in an attempt to disperse the protesters."

Numerous injuries were reported. In Aden, dock workers stormed the Yemen Gulf of Aden Port Corporation offices, seizing top officials, including chairman Mohamed Bin Aefan. One protester said, "We have had it with corrupt officials and it's time to tell them to leave. What happened in Egypt and Tunisia motivated the workers to demand their rights."

Even after opposition parties accepted Saleh's dialogue offer, demonstrations grew. He also agreed not to change Yemen's constitution to remain president for life and have his son, head of the Republican Guard, succeed him. At the same time, a new National Defense Council law lets it freely tap phones, open mail, and monitor Internet and other electronic communications repressively.

For Washington, Yemen is strategically important, located near the Horn of Africa on Saudi Arabia's southern border, the Red Sea, its Bab el-Mandeb strait (a key chokepoint separating Yemen from Eritrea through which three million barrels of oil pass daily), and the Gulf of Aden connection to the Indian Ocean.

As a result, military ties between Washington and Saleh have grown stronger, said Al Jazeera, as the country faces a southern secessionist movement, besides rising food and energy costs in the Arab world's poorest country. Nearly half its people live on $2 or less a day for those lucky enough to have work. Nearly half of Yemenis don't. They want better lives, including ending Saleh's 32 year dictatorship.

Reportedly ill with pancreatic cancer, he's "rumored to be in a coma or even close to death." A senior Egyptian official told the London-based Asharq Awsat that his death could come any time. What's certain "is that his state of health is declining drastically." It's just a matter of time until he expires. Few will mourn him, but what remains is as bad or worse. Egyptians aren't close to liberation, and won't be unless sustain pressure in large enough numbers to matter.

From January 25, the uprising's start, workers took part in protests, first as demonstrators, then as strikers unable to support their families on meager wages. Emboldened by Mubarak's ouster, they've made demands, including for independent union representation "away from the corrupt, state-backed Egyptian Federation of Trade Unions."

BBC reported bank, transport and tourism workers striking for better pay and working conditions. So are police, steel and sugar factory ones, activists among them expressing unease about Egypt's ruling generals - "the same junta that provided the backbone of" Mubarak's regime for three decades.

Moreover, even if civilian authority follows, they believe Egypt's military will have final say, assuring support for "the much hated US foreign policy....The military has been the ruling institution in this country since 1952. It's leaders" were weaned on the system. As a result, "we cannot for one second lend our trust and confidence to the generals."

"As we will see in Egypt, military coups will be disguised as regime changes. Already the public is being conditioned to view the Egyptian military as beloved liberators. But in fact they are simply another arm of the autocratic government, no more familiar with democratic ideals than the dictator they replace," himself a former general.

As a result, "(h)istory has not been newly made - it has only been repeated." Yet Obama praised Egypt's transition to "genuine democracy....The people of Egypt have spoken - their voices have been heard and Egypt will never be the same again."

In fact, one despot's removal doesn't bring reform. Ahead "(e)xpect something even more dramatic, drastic and long-lasting when the nationwide, inescapable non-change sinks in a few months from now." Similar developments are unfolding in Yemen, Tunisia, Algeria and elsewhere regionally. Celente calls it "Off With Their Heads 2.0" he sees as a prelude to civil wars, regional ones, then the first "Great War" of the 21st century.

They haven't been beyond rhetorical promises. So perhaps Celente is right expecting a much bigger eruption, engulfing Egypt and other regional countries in convulsive revolutionary revolts, exceeding far less threatening uprisings so far. If so, expect much harsher military responses, its friendly face replaced by iron-fisted toughness with full Washington support to crack down, restore order, and get Egypt back to business, including running the country despotically like always. Will it work? In the fullness of time, we'll know.