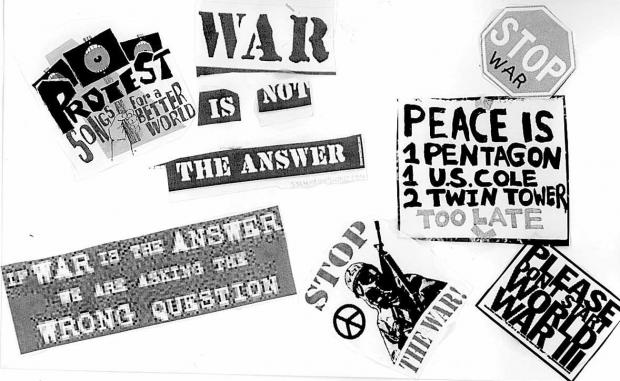 Op Ed: War is not the answer

"What difference does it make to the dead, the orphans, and the homeless, whether the mad destruction is wrought under the name of totalitarianism or the holy name of liberty and democracy?" (Gandhi)

BURNET, Texas (Feb. 16) – War is never good, no matter how moral, lofty or beneficial the justification sounds; and, no matter what the objectives. Even a necessary war of defense has negative consequences that are devastating. War is the ultimate in destruction. War destroys peace, it destroys prosperity, it destroys property and most cruelly - war destroys people.

That's why it troubles me that the language of war dominates our political discourse. The words we use do matter. The metaphors we use to express our thoughts reflect how we actually think about things. It can be disturbing to say the least.

War is a zero-sum game. There are perceived winners and losers, of course. The losers are destroyed or killed, but even the winners are left less than whole by the experience. While I'm proud of my service in the U.S. Air Force, I'm most grateful to have served as a medic. I was able to serve my country without killing a single human being. However, I helped treat those who did, and who consequently suffered both physical and mental harm as a result of their actions. Even though I was fortunate not to have experienced it first-hand, the destruction of war touched me and changed my life forever.

The myriad of wars politicians have declared on an endless series of imaginary hobgoblins have resulted in equally devastating damage to Americans and people all over the world. Collateral damage from these martial escapades has shredded the Bill of Rights, laid waste to the economy and brought us to the brink of financial collapse.

War is not really about ideas, not about right and wrong, nor about doing good and opposing evil. War is about power and control, plain and simple. When we use the words of war to oppose anybody or any thing, we are actually saying that that person or thing must be controlled or destroyed.

As a libertarian writer and activist, I've earned a deserved reputation as a warrior. I know how it is to wake up every day angry, full of rage, and go to war for what I believe to be right. And like so many other old warriors, I've now come to realize that war is hell, war is a racket and, as Benjamin Franklin observed, there never has been a good war or a bad peace.

Now I can proudly say: I am not at war.

Peace, like charity, begins at home. If libertarians are to fully embrace and adopt the message to stop all war we must begin by embracing the lifestyle of peace at home, and within ourselves. With peace comes freedom, and with peace and freedom comes prosperity which knows no bounds, has no barriers, does not discriminate and benefits everyone.

In recent years, libertarians have spent way too much time reacting to what other people say about us and not enough time telling other people what we believe. We've squandered our time in a vain attempt to modify, compose, or craft our message so as to appeal to an illusionary average voter.

All the while, we've missed the essential point. The core principal of libertarianism is a message of peace and it is echoed not only in American history, but also in the history, culture and faiths of all peoples. We are taught from childhood, don't hit others; don't cheat or steal; keep your promises. If you hurt someone, make it up to them. Always defend yourself, and expect others to do the same. These lessons of life are the lessons of libertarianism.

Libertarianism is more than merely a political philosophy. It is a way of life. We need to be it and live it. We need to stop worrying and reacting and start telling and doing. We must focus on telling people what we stand for and showing them who we are.

Our focus should not be to win arguments, or lay blame, or rant against the evils of the State. And we certainly can't open people's minds by waging war on everything in sight. To paraphrase H.L. Mencken, I believe in liberty, but I do not believe in it strongly enough to force it upon others.

"War is not the answer,
For only love can conquer hate."
(Marvin Gaye)