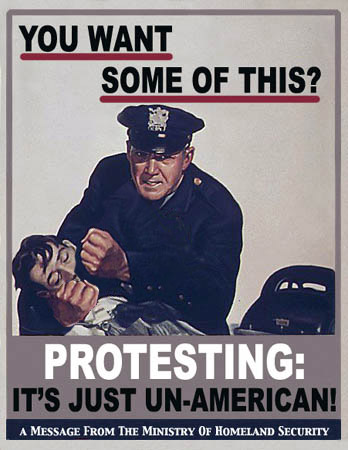 It landed, but it's too soon to know where it's going or how committed workers are to stay the course and spread it to other US states.

"one of the most lawless decisions in the history of our country. The idea of allowing corporations to have unlimited influence on our democracy is very dangerous, obviously. That's exactly what it does. Things were like this 100 years ago....with the huge corporate and business power of the oil companies and others. But this time, it's like the Gilded Age on steroids."

"We're going to be reporting every dime that we get, whether required by law or not....It will be 100 percent accountable, and that is an important principle that I believe in that we'll follow to the T....as a way of contrasting it to what's going on with the corporate money" that buys politicians like toothpaste.

It remains to be seen whether Feingold will prove true to his word, if his agenda also challenges other major issues, including imperial lawlessness and growing homeland repression. Crucially also is whether it spreads, inspiring similar efforts across America.

The tradition, however, way pre-dated him, notably articulated by John Jay, America's first chief justice, saying the country should be run by those who own it. Also in Marbury v. Madison (1803), establishing the principle of judicial supremacy, making the Court the final arbiter of what is or is not the law, a disturbing precedent subsequent courts abused repeatedly.

Besides trashing civil liberty protections, its Santa Clara County v. Southern Pacific Railroad decision (1886) was perhaps its worst by granting corporations personhood under the 14th Amendment, with all accruing rights and privileges but none of the obligations. More than any other ruling, including Citizens United, it gave them unchecked powers to become the dominant institution of our time, able to control Congress, the Executive, and state and federal courts as well as act lawlessly against public welfare interests.

Milwaukee's Journal Sentinel (JS) covered the uprising from inception in response to Republican Governor Scott Walker, in office since January 3, waging war against public workers and their unions, aiming to legislate restrictions of their collective bargaining rights to wage negotiations only.

-- "Crowds growing at the Capitol," citing their numbers, intensity and anger, shouting "kill the bill," and waving placards reading "only the little people pay taxes." They filled the rotunda as Joint Finance Committee members prepared to vote to strip workers of hard won rights they're struggling hard to preserve.

-- "Madison West students walk out," hundreds emptying classrooms to protest school curriculum changes to save money and sabotage their educations.

"Call your state senator: Vote NO on Walker's radical proposal" and against his threat to use National Guard troops against state residents.

"The idea that a governor can use the military to impose his personal, political will on the people he governs is a primitive relic of the past - one that resulted in a century of bloodshed in this country."

Howard Zinn wrote poignantly about the 1913-14 Ludlow, Colorado coal strike and subsequent massacre, killing 75 or more strikers, strike breakers, and bystanders for defying what he called "feudal kingdoms run by (coal barons that) made the laws," imposed curfews, and ran their operations more like despots than businessmen.

In 1968, force was last used against US workers during Memphis' sanitation strike, days before Martin Luther King's assassination, there to support them.

"It is hard to ascribe any motive other than the coercion of public employees to deter them from exercising their Constitutional right to speak out and protest against unjust government actions. It is a classic union busting tactic to use the threat of dire consequences, and even violence, to deter legitimate protest and speech."

Defying Walker's threats, "protesters, scores deep, crushed into a corridor leading to (his) office here on Wednesday, their screams echoing through the Capitol: 'Come out, come out, wherever you are!' "

If he declares a state of emergency, his "bill authorizes appointing authorities to terminate any employees that are absent for three days without approval of the employer or any employees that participate in an organized action to stop or slow work."

In a separate statement, he added: "We didn't get elected to worry about the politics. For us, it's simple. We're broke," but his solution follows Washington's, making workers pay for Wall Street crimes and corporate enrichment, leaving them free to keep pillaging.

"I'm sure we're going to hear more from other states where Republican governors are trying to heap the entire burden of the financial crisis on public employees and (their) unions. I think it's quite possible that if they're successful in doing this, a lot of other Republican governors will emulate" them.

In fact, Gould omitted saying Democrats are as ruthless as Republicans, including Obama and governors in dozens of states - slashing budgets, cutting workforces, and eliminating or reducing benefits since 2008, a process so far with no end in sight on the backs of ordinary workers least able to cope.

In Wisconsin, they, their supporters, and unions leaders are responding, occupying the Capitol, distributing fliers, planning vigils and "teach-outs," including over a dozen unions pledging millions of dollars, phone banks, and volunteers to fight back there and elsewhere.

"We view the events in Wisconsin as one of the worst attacks on workers' rights and their voices in the workplace that we've ever seen."

"I think Governor Walker is using this financial crisis as an excuse to attack unions, and if Wisconsin goes, what will be next?"

Already tensions in other states are growing, perhaps heading for the boil. In Ohio, public workers protested outside the Columbus Statehouse against legislation eliminating collective bargaining rights for thousands, restricting them for many others if Senate Bill 5 (SB5) passes. In Indianapolis, teachers rallied against a similar bill, and in Nashville, Tennessee, a legislative committee is considering its own.

Wisconsin's Republican majority will vote on Walker's plan by week's end. Except for possible amendments, passage seems assured unless protester thousands grow to tens of thousands, shut down the state like in Egypt, and stay the course by remaining resolute against injustice they won't tolerate.

These same unions and others, however, endorse Obama's new austerity budget, and backed his Race to the Top assault on public education. They also supported other measures barring government worker strikes. In Wisconsin, they're concerned about a bill provision banning automatic dues check-offs that if enacted affects millions of dollars in union revenues.

Workers have more pressing concerns - job security, a living wage, vital benefits, including health care and pensions, and unions backing them against federal, state and local governments wanting their rights weakened or stripped.

A University of Wisconsin teaching assistant perhaps spoke for others, comparing state developments to ongoing Middle East uprisings, saying, "When the government stops listening to us, that's when it becomes like Egypt."

It will have to far exceed replicating it, however, to halt America's race to the bottom, harming workers relentlessly to enrich bosses, wanting maximum wealth and power at the expense of rank and file workforces treated like serfs, a malignancy spreading everywhere unless stopped.

On Wisconsin for class struggles too important to lose.