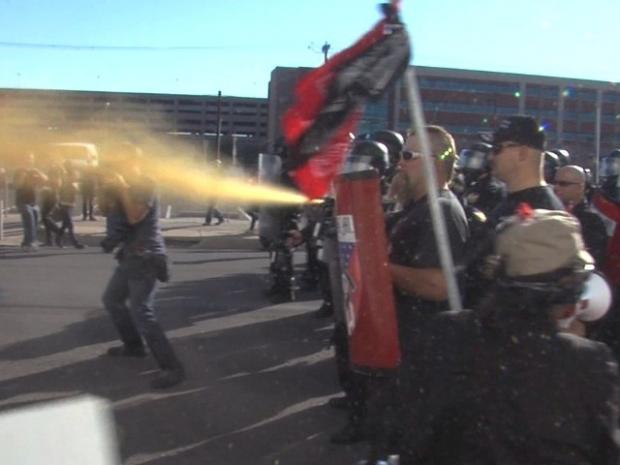 Whatever set them off, the genie is out of the bottle and spreading from Tunisia to Egypt, Jordan, Yemen, Algeria, Bahrain, Iran, Libya, Iraq, and perhaps America, in Wisconsin over proposed wage, benefits, and union bargaining rights cuts. A forthcoming article covers outrage in the US heartland, inspiring others Ohio, Indiana, Tennessee, and perhaps wherever aggrieved workers reside, awaken, and react against intolerable outrageous policies.

Its military, "backed by tanks and armored personnel carriers, took control of most of this capital (Manama) on Thursday, hours after hundreds of heavily armed riot police officers fired shotguns, tear gas and concussion grenades to break up a pro-democracy camp inspired by the tumult swirling across the Middle East."

Hundreds were injured. At least six died, some killed while they slept with scores of shotgun pellets to the head and chest, according to witnesses and attending doctors. Others were attacked when they ran to avoid violence. Foreign minister, Sheikh Khaled bin Ahmed al-l-Khalifa, defended street violence as a last resort to save Bahrain from the "brink of a sectarian abyss."

Al Jazeera's unnamed correspondent for his safety said "clashes were no longer limited to one place....They are now spread out in different parts of the city." Hospitals are filled with wounded people. "Some of them are severely injured with gunshots. Patients include doctors and emergency personnel who were overrun by the police while trying to attend to the wounded." Some are in critical condition.

Angry crowns are chanting, "Down with Al-Khalifa," referring to Bahrain's ruling family. "People are also chanting that the blood of the victims will not be in vain." The kingdom's main opposition bloc, Wefaq, denounced government violence as "real terrorism," women and children attacked like men.

Bahrain's king, Hamad bin Isa Al Khalifa expressed condolences on state television for "the deaths of two of our dear sons," saying a committee would investigate the killings, adding:

"We will ask legislators to look into this issue and suggest needed laws to resolve it." However, human rights activist Alkwaka said attacking peaceful protesters casts doubt on his credibility as numbers of deaths and injuries rise.

Initially, protesters demanded a constitutional monarchy. Now after days of violence, many want the ruling family ousted. "Bring down the government," thousands chanted, including women and children. An identified surgeon for his safety said Bahrain's Health Ministry prevented ambulances from reaching victims. Police beat medical staff. Wefaq's Hussein Mohammed called it "a slaughter." Taghreed Hussein said "We are a people of mourners now, we have nothing" as she and others suffered in grief.

Bahrain is strategically important to Washington as home for its Fifth Fleet. It's responsible for security in the Persian Gulf, Strait of Hormuz, the world's most important chokepoint for 16 million daily barrels of oil, the Bab-el-Mandeb strait separating Yemen from Eritrea through which three million barrels of oil pass daily, the Gulf of Oman, Red Sea, Suez Canal, Arabian Sea, Mediterranean Sea, and parts of the Indian Ocean. Thus, security remains tight and ready to respond violently if Bahrainians try breaching base defenses.

Reports say over a dozen demonstrators were killed in clashes with security and pro-government forces. Faiz Jibril, an opposition leader in exile told Libyans to "br(ake) the barrier of fear, it is a new dawn." A Benghazi eye witness told Al Jazeera he saw police kill six unarmed protesters Thursday. He also said 30 released prisoners were armed and paid to attack people demonstrating peacefully.

Mohammed Al Abdellah, deputy leader of the exiled National Front for the Salvation of Libya, said al-Baida hospitals were short of medical supplies because authorities refused to supply them for dozens being admitted, some critically with gunshot wounds.

In Zentan, southwest of the capital, government buildings were set ablaze. Deaths were reported in a number of cities. Darnah and protesters in other cities were chanting "the people want the ouster of the regime."

Day seven of violent Yemen protests continue, a group of senior clerics calling for a national unity government to save the country from chaos. Al Jazeera said:

"influential figures are demanding a transitional unity government that would see the opposition represented in key ministries, followed by elections in six months."

They commented as fresh clashes erupting between pro and anti-government protesters in Sanaa, Yemen's capital. Deaths and numerous injuries were reported.

"Police are trying to form lines to separate protesters and pro-government supporters - but they're also attempting to disperse crowds with live ammunition, a sign of the very tense situation in the capital ahead of calls for today's 'Friday of Fury,' " according to correspondent Hashem Ahelbara.

President Ali Abdullah Saleh meets daily with powerful tribal chiefs, requesting their support at this crucial time. "He has struck a very harsh tone, describing the protesters as 'anarchists.' "

Demonstrators reject his demand to delay elections to 2013, saying: "The only way is for us to keep fighting in the streets to bring about the dramatic changes that have taken place in Tunisia and Egypt," that, in fact, remain very much unresolved, entrenched power in both countries retaining firm control.

In Sanaa, hundreds of students joined other protesters. So did workers at several state-owned companies, demanding their managers step down. Like others, they also want higher wages in the region's poorest country plagued by extreme poverty, unemployment and hunger.

"This is what both Saleh's ruling party and the opposition feared most - loud and violent protests organized by people that have no allegiance to any of the political parties."

In Iraq, protests spread over anger about government corruption, unemployment, few public services, spotty electricity if any, repression and occupation by hated Americans.

In Kut, 2,000 protested for lack of work and electricity, among other grievances. It turned deadly when private guards employed by the provincial government open fire at crowds, killing three or more and injuring dozens.

The provincial "governor escaped through a back door with his bodyguards....Footage broadcast on Iraqi television showed black smoke billowing from the headquarters as protesters clambered over walls into the compound. Other members of the provincial council also reportedly escaped, and the Iraqi army was called in to quell the turmoil."

They rushed reinforcements to the city, blocked its entrances, and prevented people in surrounding areas from joining demonstrators. Several government buildings were set ablaze, including the governorate's main administration one and the governor's official residence.

Unrest was also reported in Afak in neighboring Diwaniyah province, where demonstrators stormed a building housing the local city council, setting it afire. Several killings and numerous injuries were reported there and elsewhere, including at gatherings of lawyers, judges, students, oil workers and others voicing specific complaints.

Political analyst Ibrahim Sumaiedi called outbreaks "very dangerous. Society is divided along ethnic and sectarian lines, and everyone is armed. If this (spreads), we will face not reform or change but something far more devastating, because there are a lot of weapons in Iraq." In Yemen also, heightening the chance for greater violence.

Anticipation is now building for February 25, called a "Revolution of Iraqi Rage," a month after the Facebook-organized "Day of Rage" that toppled Mubarak. Numerous groups urge Iraqis to take to the streets that day to protest. What began localized potentially could spread and engulf the entire country, despite low Internet access unlike Egypt. However, once protests erupt, they gain momentum of their own.

In Damietta, 6,000 textile workers continued their walkout at the company's facility south of Cairo, also for similar demands. Across Cairo, Alexandria, Qaliubiya, and the Suez Canal area, strikes and protests continued. In Port Said, 1,000 demonstrated, demanding closure of a chemical factory polluting a local lake. At Ismailiya, irrigation, education and health ministry workers want higher wages and other grievances redressed.

Many factories closed when even small numbers of workers struck to prevent actions gaining traction and spreading to other facilities. Plants affected include textiles, chemicals, cement, ceramics, steel and others.

According the the newspaper Al-Masri Al-Youm:

"In the wake of the 25 January uprising, employees in many sectors - including state-owned publishing houses and the supply directorate (rations) - took to the streets for the first time. While their demands were primarily economic, they also included pleas against corruption and nepotism."

Social injustice is a major concern it stressed, saying:

"Although protesters have clear economic grievances, they primarily lament what they perceive as unfair procedures, either in regard to unequal pay among employees of various government institutions or the arbitrary dismissal of workers."

So far, banks, businesses, factories, schools, universities and the stock exchange remain closed. Workers also expressed anger over the state-controlled Egyptian Trade Union Federation (ETUF). Thousands demonstrated outside its headquarters, demanding its chief, Hussein Megawer, resign along with members of his governing board.

"Since the military took power from (Mubarak), Egyptians have been airing grievances everywhere over just about everything, from meager wages to police brutality and corruption."

What unites them is being able to voice complaints publicly for the first time. Driven by economic despair, they now demand redress, their passion perhaps strong enough to resonate, grow, and spread for real change if millions join them in solidarity, knowing ousting Mubarak was a small first step, achieving nothing so far with generals still in charge. They're part of the old regime resistant to change.

Egyptians' main task lies ahead against formidable odds for success, but nothing was ever achieved without sustained, determined trying. A better world is possible, maybe first in some unlikely places, but never easily, quickly, or without great cost.