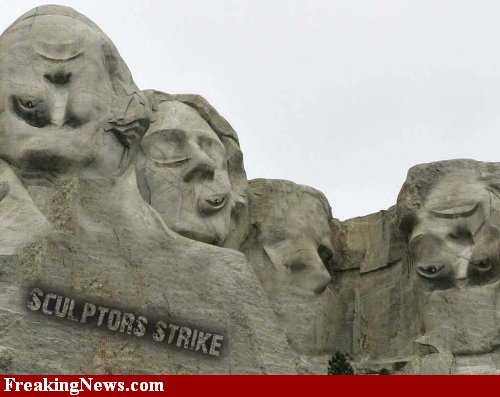 It was reminiscent of November 22, 2000 Florida, outside the Miami-Dade County Canvassing Board offices when dozens of imported Bush-Cheney ruffians rampaged through Miami's County Hall, disrupting the recount of about 10,000 undervotes, ballots with no presidential choice registered.

They assaulted Democrat party representatives, near rioted, and succeeded in halting the process. As a result, hundreds of Gore-Lieberman votes weren't counted in largely Democrat Dade County.

Fraud, intimidation and ties to big money infest US politics. Washington's criminal class is bipartisan, but Republicans are especially brazen. Wisconsin's Governor Scott Walker matches the worst of his Capitol Hill counterparts. Likely he's been chosen for his role and was directed by party bosses to wage open warfare on labor rights, the same scheme playing out across America, including by Democrats, many as extremist as Republicans at a time working people are being hammered relentlessly.

Outside the beltway, Wisconsin is ground zero, but anger is spreading and may erupt anywhere at a time workers are struggling to save hard-won labor rights, targeted for elimination. As Wisconsin goes, so goes America perhaps.

The stakes are that high. Bipartisan complicity is involved. So are union bosses tied to corporate interests against their own rank and file, concerned only for their own welfare and self-enrichment. For decades, they betrayed their loyal members, functioning as wealth and power instruments, not legitimate labor leaders the way early organizers envisioned.

Reports from the Scene

Overwhelmingly against them were teachers, students, police, firemen, other public service workers, and many private sector ones, knowing their own rights are at stake.

According to Media Matters, right-wing media, especially TV, "characterized the protests as 'riots' and 'uprisings' and attacked the protesters as 'thugs' who could 'get violent.' " In fact, they're working class Americans, teachers, professors, students, police, firefighters, nurses, and supportive spouses, united in solidarity for decent jobs, a living wage, essential benefits, and a secure retirement. Throughout days of protests, they've been resolute and peaceful, showing remarkable restraint despite an all-out assault on their rights.

Walker wants to double their out-of-pocket contributions to healthcare and pensions, amounting to an eight to 20% haircut by most estimates. Most disturbing, however, would be loss of collective bargaining rights, indexing pay raises to the grossly understated CPI index, and giving Walker emergency powers to fire workers unilaterally.

On February 19, Milwaukee's Journal Sentinel reported "no political compromise in sight," writers Bill Glauber and Don Walker headlining, "Struggle could change the way government does business with its employees," saying:

At issue is "nothing less than a defining moment for organized labor in America." It's a national battle pitting rank and file workers against politicians, corrupt union bosses, and big money, "an epic struggle" to save hard-won worker rights on the chopping block for elimination.

It's also where government workers, in 1959, first gained collective bargaining rights, three years before federal ones. Today's conditions are far different. States across the country claim budget shortfalls require painful choices on the backs of working people, not elitists getting tax cuts.

As a result, workforces are being slashed and benefits cut, including wages, healthcare, Medicaid and other help for the nation's poor. Everything's up for grabs for reductions or elimination in a ruthless race to the bottom at a time America's super-rich get more than ever, thanks to bipartisan policies favoring them at the expense of most people losing out.

"Attempting to dramatically change the laws and the way collective bargaining is handled will be noticed in Wisconsin. It's happening there. It's happening in Ohio. Even in New York" with a Democrat governor and legislature. "This is the first time we've seen such a widespread thing to seek concessionary bargaining in the public sector (to) roll back" important rights.

As a result, they're literally on the line. At stake is losing them entirely with Walker spearheading the assault, a Republican-chosen attack dog.

On February 19, New York Times writers Monica Davey and AG Sulzberger (son of Times publisher Arthur Punch Sulzberger, Jr.) said "Republicans waited in frustration, Democratic senators showed no inclination to return and Mr. Walker put off the release of his budget proposal (until March 1), with no end to the battle in sight."

Angry protesters demand his recall, "calling him a bully and likening him to Scrooge, Hosni Mubarak, even Hitler. (He's) become a national figure," a lightening-rod, "the man who set off a storm of protest, now spreading to other states..."

"Critics and supporters alike say Mr. Walker has never strayed from his (political) approach....pressing for austerity, and never blinking or apologizing for his lightening-rod proposals."

He's unabashedly pro-business, anti-labor, and, like all politicians, beholden to big money backers. According to Democrat Senator Chris Larson:

"Unions have always been his pinata, over and over. And this time I think he's trying to out-right-wing the right wing on his way to the next lily pad."

Unfazed, Walker said he's "not going to be intimidated, particularly by people from other places." Within days of taking office, he hung a sign on his office doorknob saying: "Wisconsin is open for business," meaning he's brazenly pro-business/anti-labor.

He's "a hard-right partisan who does not negotiate, does not compromise. He is totally modeled after a slash-and-burn, scorched-earth approach that has never existed here before."

Clearly he was chosen for his role to ram through harshness to be replicated nationally. Last fall he was preparing. Before taking office, he urged Republican lawmakers not to approve new lame duck session public workers contracts. Once governor, he wanted "maximum flexibility" to force passage of anti-labor measures. Now he's got it, arrogantly and dismissively, saying:

"Months from now, when this is is enacted and people realize it's not the end of the world, not all, but I think the vast majority, including the vast majority of the public employees, will realize this was not nearly as bad as they thought it was going to be. And we'll get back to work in the Capitol."

Opposing him are tens of thousands of committed angry workers, teachers and students, university ones facing a 20% tuition hike, unaffordable for many. Ground zero remains the capitol rotunda, resonating chants, drumbeats, banners and posters showing slogans including: "Tax the Rich." "Wisconsin workers: unite or die," and "United we Stay" combined with "Hell no, we won't go," "Kill the Bill" chants.

One worker spoke for many, saying "Walker wants to turn Wisconsin into" WalMart. Another added, "If they cut our pay further, I would qualify for BadgerCare (health insurance for low income, uninsured families with children), food assistance and home heating assistance." Diluting them ahead is planned, perhaps eliminating them in future cost-cutting. It's happening elsewhere - in California, New York, Michigan, Illinois, and many other states nationally, one round of cuts begetting others in a race to the bottom war on workers.

Their sole defense is resolute unified resistance through protests, strikes, and other actions, hanging tough, staying the course, no matter the long odds against them. The alternative is too grim to imagine, a long march to serfdom, what Walker et al have in mind.

From the looks of you it dosn`t look like you are going to be around long.You look sick,very sick so! why don`t you just go somewhere alone and lay down.