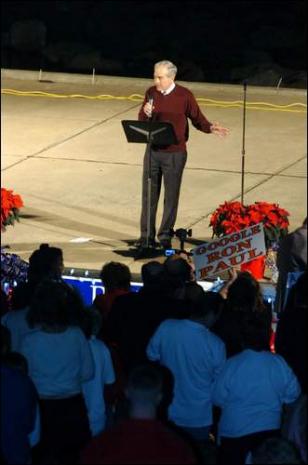 Last week, the Financial Crisis Inquiry Commission presented it's results to the Financial Services Committee. As with most other politically appointed commissions, the results of the commission's investigations were easy to predict. Established by the same Congress that gave us national healthcare and with a majority of its members appointed by those who seek to solve every problem with more government intervention, it was no surprise that the commission's findings would favor increased government intervention in the economy.

Minority members were not substantively involved in the commission's operations, and the commission attempted to exclude their dissenting views by granting them very limited space to do so. However, even the minority members of the commission failed to consider the most important cause of the financial crisis; namely the Federal Reserve's loose monetary policy. Almost a century ago, in 1912, Ludwig von Mises published his great work: The Theory of Money and Credit. This was the first systematic description of the Austrian business cycle theory, which describes the relationship of the business cycle to monetary policy. This theory explains why so many businessmen man make so many of same errors at the same time, yet not a single member of the commission undertook an analysis of the financial crisis from an Austrian economic viewpoint.

Instead, blame was placed on failures in financial regulation and corporate governance, excessive borrowing and risky investments and expansion of suprime lending, among other factors. But none of these explanations can answer why this crisis occurred. Why was there excessive borrowing? Why was there an explosion of suprime lending? Why were there failures in corporate governance? Why did virtually no one - except Austrian economists - see this coming?

Without the Federal Reserve's massive expansion of credit throughout 1990s and the early 2000s, there could have been no excessive borrowing or explosion of suprime lending. Through easy credit, the Fed initiated the economic boom that created the .com bubble. When that bubble burst, the Fed pumped additional liquidity into the system, which led to a new boom that created the housing bubble. And now, the Fed's additional trillions of dollars in monetary pumping is creating yet another bubble. This is the exact opposite of stability in the marketplace and has nothing to do with free markets. It's central economic planning at its worst.

It is imperative that the historical record accurately reflects what actually happened. In the popular press, we see columnists attempting to blame the financial crisis on the small-government, free-market policies of President Bush. Hundreds of billions of dollars in stimulus payments, a $700 billion bailout program, and trillions of dollars of Federal Reserve credit facilities hardly represent small government and free market principles in action. On the contrary, these government interventions, by both major parties, demonstrate quite clearly our nation's acceptance of crony capitalism.

School children today are taught the myth that Herbert Hoover was a small-government president who did nothing to stop the depression, while the truth is exactly the opposite. Fed Chairman Bernanke failed to understand the true cause of the depression so his policy subscriptions to combat the current crisis are understandably flawed. Unless we can correct false economic rhetoric, truly understand the causes of the economic crisis and do away with our loose monetary policy, we will find ourselves in ever more vicious business cycles.
source