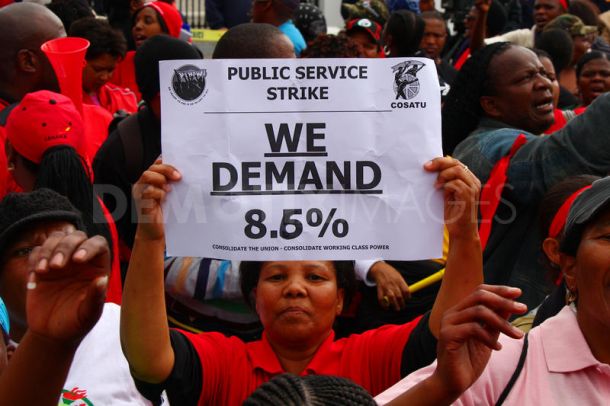 His type governance, that is, and from administrations that followed, Democrats as ruthless as Republicans.

Washington is ground zero for government's assault. Outside the beltway, it's Wisconsin, but spreading fast to other states and cities. An unfair fight pits major media-supported federal, state and local governments allied with union bosses against American workers, largely on their own, relying on their grit and resourcefulness to survive in a very hostile environment.

Threatened are hard-won worker rights, including secure jobs, a living wage, essential benefits, and the right to bargain collectively with management to protect them. They're going, going, and soon gone unless mass grassroots activism saves them, what's so far absent. Wisconsin worker heroics are impressive, but not enough.

Much more is needed - there and across America, because workers in all states and communities are threatened, their rights being trashed and have been for decades, especially since the Carter administration drafted plans Reagan implemented:

Firing over 11,000 PATCO workers, jailing its leaders, fining the union millions of dollars, and effectively busting it for monied interests. It was a shot across organized labor's bow, a clear message to Wall Street and other corporate favorites - supported by then AFL-CIO president Lane Kirkland, one of many labor bosses who betrayed rank and file trust. They still do for their own self-interest. No wonder organized labor is a shadow of its former self, headed for extinction unless stopped.

Reagan's administration set the pattern. Union bosses conspired with management against their own membership. During bitter coal miner, steel worker, bus driver, airline worker, copper miner, auto worker, and meatpacking worker strikes, they denied rank and file support, assuring them defeat. At decade's end, trade unionism in America was decimated and kept declining since, heading for oblivion with little pressure to stop it.

-- gutted work rules, including on-the-job health and safety protections; and

-- forfeited security through lost benefits and pensions, including for retirees, besides everything lost in 2007 under Bush.

Obama also abandoned the Employee Free Choice Act (EFCA) after promising support. If enacted, it would have been labor's most impressive triumph since passage of the landmark 1935 Wagner Act, letting labor bargain collectively for the first time with management on even terms.

It would have mandated good faith bargaining as a fundamental right, protected from management or government interference.

It also would have strengthened Wagner Act provisions to unionize, bargain collectively through chosen representatives, and provide other worker protections. It would have leveled the playing field to empower them more than since Taft-Hartley weakened them significantly.

It would have affirmed the 1937 Supreme Court Virginia Railway Co. v. Railway Employees decision that "employees (have) the right to organize and bargain collectively through a representative of their own selection, doing away with company interference and 'company union.' "

Also, the Courts 1937 National Labor Relations Board v. Jones & Laughlin Steel Corporation ruling that J & L engaged in unfair labor practices by "discriminating against members of the union with regard to hire and tenure of employment, and was coercing and intimidating its employees in order to interfere with their self-organization." It said union representation "was essential (to) give laborers opportunity to deal (equally) with their employer," public workers afforded the same rights as private ones.

No longer. We've come a long way from New Deal policies and fair Justices. Today's Democrats, Republicans, and courts are supremely pro-business, especially the Roberts Court, selected to be anti-labor, in the tank for monied interests, and it shows.

-- Glenn Beck calls union protests "riots" and "uprisings," adding that "Evil (is) spreading around the globe;"

-- Republican strategist Kate Obenshain told Sean Hannity: "We see something that's going on, say, in Wisconsin, where they have the rallies for the teachers, where teachers are yanking kids out of the classrooms and calling in sick - totally lying...;" and

-- Fox's Tracy Byrnes called Wisconsin protests "actually, borderline gonna get violent, it sounds like" when, in fact, they've been remarkably peaceful unlike how extremist right-wingers agitate.

CNN is just as bad, competing with Fox for bottom-of-the-barrel honors, but nothing on corporate TV or radio has merit. Nor in print; to wit, Time magazine's Joe Klein in his February 18 article headlined, "Wisconsin: The Hemlock Revolution," saying:

In the Middle East, "protesters are marching for democracy; in the middle west, they're protesting against it....trying to prevent a vote....(trying) to stymie majority rule...."

Republicans won, said Klein. "In a democracy, there are consequences to elections and no one, not even the public employees union, are exempt from that." Even labor contacts aren't sacrosanct he believes. "We hold elections to decide" those things. "And it seems to me that Governor Scott Walker's basic requests are modest ones...."

If Time prints this and similar op-eds, why should Fox surprise? America's entire corporate establishment, including big media, is united against labor rights, targeting them for destruction.

Even the New York Times opposes closed schools and public services blocked for any reason, no matter how important doing it is to force change, what's never possible without it and much more. Timidity yields nothing but tears.

Like other Wall Street Journal writers and its editorial staff, Steven Malanga is no friend of labor, his February 22 WSJ article headlined, "The Showdown Over Public Union Power," saying:

"Public unions (are) among the biggest players in national politics," contributing millions compared to billions from corporate donors way out-muscling them. "If Gov. Walker succeeds....other reformers will follow (to) restrict public-sector" union power. It "would give opponents around the country a new playbook to follow in countering the rich resources and deep influence of public unions over taxes and spending."

The Financial Times agreed, listing preferred "liabilities" to be shed, including "legacy" ones, meaning pensions and healthcare benefits. The Washington Post said it's "important that the president did not flinch in demanding even deeper concessions from workers." The Wall Street Journal said it was "glad the Administration is at least talking a tougher line on bankruptcy than Mr. Bush (to) force the companies and their unions to make the hard decisions that politics may still let them avoid."

The unanimity of corporate managed news offered support then and now against worker rights they disdain, and why not. They're giants with large workforces they want without rights, beyond minimal ones too little to matter.

"The most important thing (Ronald) Reagan did was break the 1981 air traffic controllers' strike, which helped break the hold of organized labor over the US economy." Crushing workers gave US corporations greater flexibility to invest in new labor-saving equipment, technology and methods to cut staff, pay less, and achieve great cost savings, said Friedman. He practically gloated about the collapse of labor rights, weaker now after a decade under Bush and Obama.

More recently on May 8, 2010, Friedman headlined, "Root Canal Politics," denouncing workers for believing in the "tooth fairy," expecting government services without paying for them. Baby boomers, he said, had "eaten through all that abundance like hungry locusts." After getting their way for decades, "it's now going to be, mostly, about taking things away. Goodbye Tooth Fairy politics, hello Root Canal politics." He barely concealed joy, crowing over worker pain like all pro-business columnists, even ones claiming progressive credentials.

On February 21, The Times featured commentaries from anti-union advocates like Professor Daniel DiSalvo headlining, "Hitting the Unions Where It Hurts," saying:

Walker wants "to dismantle (the) dysfunctional, circular relationship between unionized government employees, the politicians they help elect, and the rising wages and benefits to which they commit government." In fact, wages have stagnated for over three decades, and essential benefits have eroded.

Nonetheless, DiSalvo took sides, saying, "If successful, Walker's plan may (make) Wisconsin (more) like Texas or Virginia (where) most collective bargaining in the public sector is illegal and the percentage of unionized public employees is paltry." He hopes Wisconsin "will have as bright a fiscal outlook" as those states, affording workers there few or no rights.

Walker only asks workers to "accept modest changes to their benefits, or face losing their jobs." False, layoffs are coming and without collective bargaining power no job or essential benefit is safe. "Public employee unions will continue to protest," said Schneider, "even though (Walker) is the first politician who has told them the truth in ages." In fact, Obama backs the same policies, enforcing them since taking office.

"Government workers....don't generate profits. They merely negotiate for more tax money." In fact, like private sector ones, they deserve similar rights. Moreover, unlike corporate predators, they earn, not steal what they get, what Sherk noticeably side-stepped. Instead, he hailed Walker's plan, saying it "reasserts voter control over government policy," perhaps forgetting public workers also vote and deserve officials treating them equitably.

Mass protests in Wisconsin continue. Tuesday was day eight. Involved are over 200,000 state workers and supporters, including students and teachers. Key is preserving collective bargaining rights without which no others are safe. Neither side so far is budging, Walker ordered by Republican leaders to hold fast. Other states are watching, governors there to grab all Walker gets, or more like in Ohio where Governor Kasich's bill is even more draconian.

Nonetheless, rank and file opposition remains strong, including among teachers, students and supporters traveling long distances to march and protest in Madison. The University of Wisconsin-Madison Teaching Assistants Association (TAA) called for a "teach-out," replacing a walkout saying, "We are calling for instructors to use their discretion to cancel classes, reschedule them or hold them off campus."

Demonstrations around the country support them from Maryland and New Hampshire to Nevada and Olympia, Washington, knowing workers there can expect their own moment of truth. It's spreading everywhere, pitting bought-and-paid-for-pols allied with union bosses against working Americans. They're fighting for hard-won rights fast eroding toward elimination unless mass activism draws the line and holds it, no matter what. Their choice now is fight or lose. There's no middle ground against forces unwilling to yield.