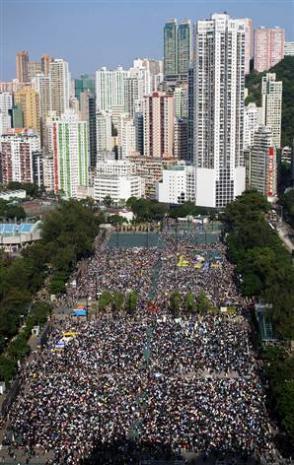 Wisconsin's Spirit: Courage for Other States to Emulate - by Stephen Lendman

The issue is simple and straightforward - organized big money v. organized people essential to beat it. Since February 15, Wisconsin public workers, students, and supporters have sustained heroic resistance against corrupted dark forces determined to crush unionism there and across America. A previous article explained, accessed through the following link:

The scheme is old, dirty and ongoing - a conspiracy involving corporate bosses, federal, state and local Democrat and Republican leaders, and corrupted union heads to bust unions, effectively depriving workers of collective bargaining and other hard-won gains, returning them to 19th century harshness when they had none.

The battle lines are drawn. Across America, public and private worker rights are threatened unless mobilized resistance saves them. Governments at all levels are using dire economic conditions to make ordinary people bear the burden of recovering from the hardest times since the Great Depression. The solution is worse than the problem - the usual IMF diktat, including:

-- eliminating pensions and other entitlements;

-- lower taxes for corporations and America's super-rich; and

In the 1980s, it was Reaganomics, trickle down and Thatcherism. In the 1990s, it was shock therapy. Today, it's austerity to make workers pay for a Wall Street/Washington caused crisis - a Main Street Depression, leaving them struggling on their own to get by. Nonetheless, officials are capitalizing on crisis conditions to inflict more pain on the backs of already victimized people.

Economist Jack Rasmus titled his latest article, "Why Public Employees Aren't the Cause of States' Budget Crises," discussing five reasons behind them:

(2) Decades of counterproductive state policies to reduce taxes for business and investors, resulting in a revenue-producing "race to the bottom."

(4) "(S)harply rising costs of borrowing by States in the municipal bond market, where (rates) have risen sharply due ultimately to the speculative excesses of the recent financial boom and bust."

Republican and Democrat governors across America want workers to bear the burden through wage and benefit cuts as well as loss of collective bargaining rights at a time they're more than ever needed.

Facing a $175 billion shortfall, governors across America are using the same script - help business and super-rich supporters with tax cuts, other benefits, and austerity for state employees when they need help, not cutbacks.

For 10 days, Wisconsin's Republican GovernorScott Walker made headlines, demanding draconian harshness for public workers. Protests continue, including huge crowds expected this weekend, maintaining pressure for social justice against a governor told by Republican leaders, corporate bosses and funders to give none.

Senate Democrats haven't returned. House ones introduced scores of amendments to stall and force debate ending in defeat along party lines. Preserving collective bargaining rights is central. Democrats agree with Republicans and union bosses on wage and benefit cuts up to $400 or more a month, besides furloughs and other concessions.

"The state should not be in the business of dictating terms....of what should be collectively bargained (for in) local labor agreements. (It's) unfortunate the GOP approach has been to set a maximalist tone on an issue that should be looked at carefully - before discarding a system" that's stood the test of time for decades and should be preserved.

The proposed bill "is incontestably radical." Instead, the current "debate should be, 'Mend - don't end," and don't make workers bear the burden for state shortfalls in lieu of more equitable solutions.

In Indiana, Republicans back a "right-to-work" bill, prohibiting union-employer agreements requiring workers join public or private sector unions and pay dues. As in Wisconsin, Democrats left the state to stop it. Thousands of workers rallied on Statehouse grounds. Republican Governor Mitch Daniels supported the bill conceptually, but on February 22 urged Republicans to drop it because it interferes with his agenda.

Connecticut Democrat Governor Daniel Malloy demands more draconian cuts than Walker's. He wants state workers to bear the brunt of the state's $1 billion shortfall, amounting to an average $20,000 employee haircut annually in 2011 and 2012 through a combination of wage and benefit cuts. By comparison, Walker demands $300 million in savings.

Campaigning, Brown promised to "invest in jobs and the working families who make California strong." As governor, he's waging war against them.

Facing a $10 billion 2011 shortfall and an estimated $14 billion 2012 one, he wants 10% cuts for state agencies, requiring layoffs as well as comparable pay and benefit cuts. Healthcare and education are also targeted, including Medicaid. According to Daniel Sisto, Healthcare Association of New York State president, he wants "the largest cut to healthcare services in New York State's history" with more planned ahead.

Demanding lower future labor costs, expect more layoffs besides 34,700 lost federal, state and local government jobs in 2010. With over $2 billion less 2011 New York city aid, 6,000 teacher jobs are at risk. Those remaining face draconian cuts on top of previous ones imposed and those from Albany.

Presently, wage freezes are in effect for all state workers, pending contract negotiations expiring on March 31 in which he's seeking $450 million in concessions.

Florida Governor Rick Scott wants state workers to pay 5% of their salaries for pensions and have their healthcare benefits capped, despite annual exponential cost increases workers will have to pay themselves. He also proposes 8,700 job cuts. In addition, legislation was introduced, requiring state workers sign up annually for union membership and prohibiting the current dues check off provision.

They want healthcare contributions raised from 8 to 30% of costs. State payments for employee pensions will also be withheld for the second straight year unless benefits are sharply reduced by increasing the retirement age and ending cost-of-living adjustments.

A previous article addressed hard times in Illinois, facing the nation's largest per capital shortfall. Access it through the following link:

As a result, taxes were raised, benefits cut, and more draconian measures are planned, affecting pay, healthcare, pensions and other ways to make state and private workers bear the burden of years of mismanagement, fraud, and corporate favoritism under Democrat and Republican-led governments.

Strong unions in America face an existential struggle for survival, pitting worker rights against big money allied with all levels of government and union bosses, harming rank and file interests for their own privilege and self-enrichment.

As a result, workers are largely dependent on their own tenacity, resourcefulness, and courage to struggle for rights too precious to lose. It's not solely a Wisconsin issue. All public and private workers across America are affected, their futures on the line against destructive dark forces essential to recognize, confront and defeat. The moment of truth is now.

1 Comments in Response to Wisconsin's Spirit: Courage for Other States to Emulate

It would be nice if the fat cat union workers, especially the financially obese leaders, could figure out that their activities help keep a sinking ship from being repaired. After all, each state is a 'hull section' of  The USS America, which is going down under an ocean of debt. Some of the holes in our ship's financial side are from union 'torpedoes'. Not all the holes to be sure & not the biggest holes, but holes in our national 'ship' just the same. All the 'holes' in the sections of our financial ship are taking US further under water. Fill enough sections with water...

Governors are trying to repair the holes in their  state 'section of the ship', but unions try to selfishly thwart their efforts. In WI's case the gov should also be taking on the cops & fire dept unions. The police & fire depts. have contributed  their own 'torpedo holes' . Gotta fix ALL the holes Gov Walker!!

While unions clamor for their own status quo our boat slips further beneath the ocean of debt that is filling & sinking the good ship USA.  The useful idiots scurry on deck so to speak, seemingly oblivious to the fact that at least they have jobs. And very well paying ones. The issue then must be about more than money, as union workers take home more on the average than private sector workers. Then there are union benefits...

The Govs are trying to save all the union jobs & propose cuts in union bennies to help fix  financial problems over compensated union workers have contributed via cronyism that add more 'water' to an already sinking ship.

The US has been under attack since at least 1913. I think longer. Our national 'ship' was badly torpedoed when the privately owned "Fed" was foisted on us. We started taking on 'water' slowly back then. Our great ship has taken a lot of hits in the ensuing decades. Then Bush hit us with some really big spending torpedoes. Now his 'political son', Obama, is trying to out do Bush & sink the US NOW. I don't think yesterday would have been soon enough for 0 & his pals in the 'progressive' movement to have sunk the USA. What do ya think 0 meant by "We are just five days away from fundamentally transforming the United States of America!!" ??

What I miss in the piece above is that the author makes no mention of all the socialist & communist influences in the union ,err,  [I'll be kind & call them] rallies. Perhaps the promoters of these 'rallies' are much more interested in a new form of government than they are about protecting the union workers. Could it be that the 'rallies' are the start of a larger movement....one that seeks to replace the US Republic with something more communist, Marxist, socialist or fascist...I think so. {Communist, Marxist, socialist or fascist: Pick.one. These cousins all aim for total govt control.)

Now we have Muslims lining up their own stealth Jihad 'submarines' & are aiming at the USS America with a Caliphate Sharia takeover.

How long before the 'sailor' citizens wake up & take back our ship? Do you not yet realize that 0 is lining up the USS America to give 'progressive' & Islamic 'submarines' an even broader target?