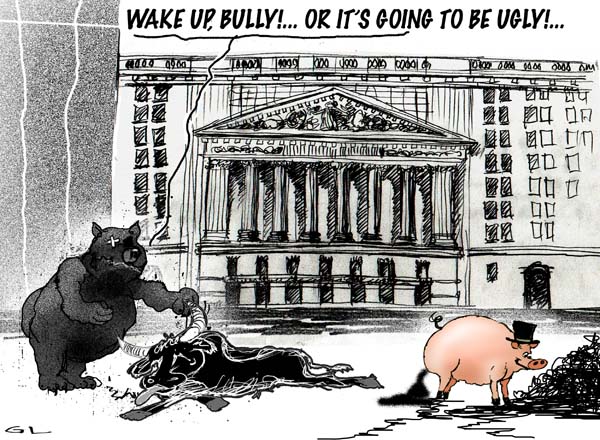 On February 25, AP said the Wisconsin Assembly, after days of debate, passed Walker's contentious bill, but the standoff is far from over. Senate Democrats remain absent in Illinois, vowing to resist ending collective bargaining rights for public workers. So far, Walker won't compromise, so resolution is on hold.

"What's happening in Wisconsin is....a power grab - an attempt to exploit the fiscal crisis to destroy the last major counterweight to the political power of corporations and the wealthy." It involves much more than union busting, bad as that is.

Hidden in the bill's 144 pages are "extraordinary things," including a provision letting Walker appoint a health czar to make draconian healthcare cuts to Wisconsin's poor and low-income households unilaterally.

"16.896 Sale or contractual operation of state-owned heating, cooling, and power plants. (1) Notwithstanding ss. 13.48 (14) (am) and 16.705 (1), the department may sell any state-owned heating, cooling, and power plant or may contract with a private entity for the operation of such plant, with or without solicitation of bids, for any amount that the department determines to be in the best interest of the state. Notwithstanding ss.196.49 and 196.80, no approval or certification of the public service commission is necessary for a public utility to purchase, or contract for the operation of, such a plant, and any such purchase is considered to be in the public interest and to comply with the criteria for certification of a project under s. 196.49(3)(b)."

Call it the Koch brothers provision, multi-billionaire owners of Koch Industries, an industrial giant heavily invested in energy and power-related enterprises. According to Wisconsin campaign finance filings, Koch Industries PAC contributed $43,000 to Walker's gubernatorial campaign, second only to the $43,125 given by state housing and realtor groups.

Moreover, the Koch PAC helped Walker and other Republicans by contributing $1 million to the Republican Governors Association (RGA), that, in turn, spent $65,000 to support Walker and $3.4 million on television attack ads and mailings against his opponent, Milwaukee Democrat Mayor Tom Barrett. It made the difference between victory and defeat. Republican out-spent Democrats, sweeping many of their candidates to victory last November.

Significance of the Contentious Provision

Opinions differ on the provision's significance. The Wisconsin Electric Cooperative Association's David Hoopman sees no private enterprise bonanza. Executive director Charles Higley of the Citizen's Utility Board agrees, saying many state-owned plants are old, cold-fired, and heading toward failing to comply with environmental requirements. Others have already done so.

The Customers First! Coalition, however, wrote Walker, seeking "a more thorough evaluation of the value of the state's power assets and a comparison of whether state or private ownership is in the best interest of the taxpayer" as well as more time for debate.

Whoever's right, letting the governor use no-bid contracts to sell state assets raises serious red flag issues. If the above provision wasn't important, why was it included, and what does Koch expect for contributing, for sure, much more than it gave! Krugman puts it this way:

"Union-busting and privatization remain GOP priorities, and the party will continue its efforts to smuggle (them) through in the name of balanced budgets," other reasons, or none at all, aiming straight at the heart of democratic freedoms, affecting everyone directly or indirectly.

For 20 minutes, blogger Ian Murphy fooled him, recording his provocative comments so we know. They included possible bogus felony charges against absent Democrat senators, as well as consideration given to "planting some troublemakers" among protesters to blame them.

He also praised one of Ronald Reagan's "most defining moments....when he fired the air traffic controllers." Moreover, he told his cabinet that today's confrontation is "our time to change the course of history," implying, of course, his intent to crush unionism in Wisconsin, stripping public workers of all rights, including decent pay and benefits, as well the right to bargain collectively for for better ones.

He also threatened to fire 12,000 state workers without passage of his overhaul bill, saying:

"I'd do almost anything to avoid laying people off. We need to avoid those layoffs for the good of those workers," but he'll do it anyway to show toughness to impress top Republican leaders and funders like the Koch brothers.

In so doing, he's at odds with 200 state mayors, school board presidents, and other officials, opposing eliminating collective bargaining rights. Walker, however, is hardline against any changes to his bill. His comment about Reagan is telling, wanting, in fact, to harm workers the way he did to all organized labor nationally.

When he took office, union membership was around 24%. When he left, it was 16.8%, two-thirds of its former self and headed lower. The latest January 2011 Bureau of Labor Statistics, in fact, shows 11.9% of workers organized nationally, only 6.9% of private sector ones, heading for oblivion if what's going on isn't halted.

This is organized labor's last stand. Wisconsin is ground zero. As it goes, so goes America, so it's crucially important to resist, stay resolute, stand fast, and refuse to surrender rights too important to lose. It's their call and our obligation to support them.

1 Comments in Response to Hidden Provisions in Wisconsin Bill