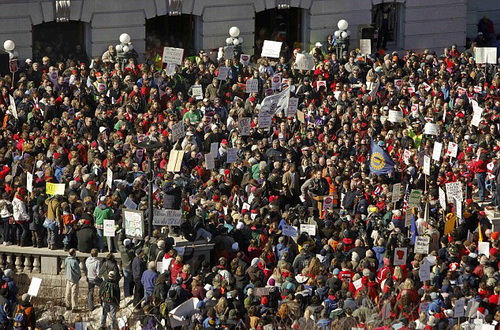 Egyptians want it. So do Palestinians, Arabs throughout the region, protesting East and West Europeans, others across the world, and growing numbers in America, especially in Wisconsin - ground zero to save organized labor.

At issue is freedom v. tyranny, what Aaron Russo's 2006 film called "Freedom to Fascism," identifying America's money system as inimical to liberty and justice for all. Along with American-style corporatism, it lets banking giants control money, credit and debt for private self-enrichment, colluding with government for laws favoring them, as well as others destroying democratic principles, fast eroding and disappearing throughout the country.

-- alliances with global despots, replaced when they forget who's boss;

-- another preventing constructive change, forcefully when other ways fail.

It makes America and similar societies unfit to live in, heading them for tyranny and ruin. It also fuels popular anger, bubbling eventually to the surface, growing and now spreading across the Middle East and parts of America.

On Saturday February 26, all 50 states held pro-labor "Save the American Dream" rallies, promoted by MoveOn.org:

"in every major city to stand in solidarity with the people of Wisconsin" and workers in their own states under attack. Wisconsin is ground zero. The cancer is national, pitting an alliance of bought-and-paid-for governments, corporate bosses, and corrupted union heads against organized labor, democratic values, and basic freedoms, including a living wage, essential benefits, decent living standards, and a seat at the table representing themselves.

"Rallies were held across the country Saturday to support thousands of protesters holding steady at the Wisconsin Capitol in their fight against Republican-backed legislation aimed at weakening unions."

In fact, Walker's bill wants them and democracy destroyed, so other state governors and Washington can do the same thing. It's been happening incrementally for decades.

"Union supporters organized rallies from New York to Los Angeles....(Thousands) gathered (in) Columbus, Ohio....(Others were held across America, including) "Topeka, Kan; Harrisburg, Pa; and Olympia, Wash. (In) Los Angeles, public sector workers and others held signs (saying) 'We are all Wisconsin.' Some wore foam 'cheeseheads' in support."

In St. Paul, MN, union leader Eliot Seide addressed protesters, saying, "The right to collectively bargain is a American right. You can't have American democracy if you don't have a strong trade union movement."

Others in Madison and across the country expressed anger, saying they won't stand for what Walker wants. Maintaining that spirit is key to stopping him.

On February 26, New York Times writers Richard Oppel and Timothy Williams headlined, "Rallies for Labor, in Wisconsin and Beyond," saying:

In Wisconsin, tens of thousands rallied for worker rights, chanting, "This will not stand!" Over 100,000 turned out in Madison, including celebrities like Peter Yarrow of Peter, Paul and Mary fame. The Times estimated the crowd at "70,000." It was more than half again that size. Others rallied in support across America, "a call (drawing) thousands of demonstrators to state capitals and other cities from Albany to the West Coast."

Al Alt, a teacher for 40 years, said, "We've had bargaining for 50 years (actually 75), and (Walker) wants to end it in a week." For two weeks, thousands protested peacefully, hundreds camping out every night in hallways, stairwells, and public areas of the Capitol.

"As has been reported in the media, the protesters are cleaning up after themselves and have not caused any problems. The fact of the matter is that Wisconsin's law enforcement community opposes Governor Walker's effort to eliminate most union activity in this state, and we implore him to not do anything to increase the risk to officers and the public....Law enforcement officers know the difference between right and wrong, and (Walker's) attempt to eliminate the collective voice of Wisconsin's devoted public employees is wrong. That is why we have stood with our fellow employees each day and why we will be sleeping among them" overnight.

On February 27, Palmer said authorities were backing away from their eviction plan, saying, "Now it sounds like they are going to let people stay." Protesters will only be asked for "voluntary compliance." Some said if evictions happen, they'll circle the Capitol holding hands.

Prior to Palmer's Sunday announcement, BailOutPeople.org's web site headlined, "The Whole World is Watching! The Capitol Belongs to the People!" They build it. They paid for it. They deserve support from everyone. Maintaining pressure is essential, inside and outside the building, across the state and country. It's not just a Wisconsin issue. It's a national and worldwide one - freedom or fascism, global Walkers v. working people everywhere, struggling for justice against dark forces wanting greater empowerment and enrichment at their expense.

On February 24, the Social Justice & Labor Center headlined, "Why Wisconsin matters in New York, and throughout organized labor," saying:

"Unionists from across the nation have come out in force to support our colleagues in Wisconsin, as well as those in Idaho, Indiana, New Jersey, Ohio and Tennessee. Other states are facing unprecedented threats as well. And New York state is not exempt."

"Make no mistake about it," worker rights are on the line everywhere. It's resist or die. "What is happening right now in Wisconsin is historic." Standing firm there is crucial. Workers didn't cause fiscal problems. Bad governance, Wall Street crooks, corporate greed, predatory capitalism, and corrupted union bosses are responsible. They tanked the economy. Make them fix it, not workers, suffering grievously as a result.

Moreover, an Economic Policy Institute (EPI) study showed Wisconsin public workers make on average 4.8% less in total compensation than private sector ones. In addition, teachers are on the front lines educating future generations, and police, firefighters, nurses, sanitation workers, and many others provide essential services without which societies can't function.

They deserve support from everyone for a living wage, essential benefits, a decent standard of living, and right to bargain collectively for self-betterment. It's them against America's Walkers, struggling for rights too important to lose. Everyone's in this fight together against dark forces heading America for a future no one wants, except elitists and their political allies benefitting from other people's pain. Now's the time to stop them. Below are 10 more reasons.

On February 26, the web site Think Progress.org headlined, "REPORT: Top 10 Disastrous Policies From The Wisconsin GOP You Haven't Heard About." Access it through the following link:

In Walker's agenda and bill, much more is at stake than stripping workers of collective bargaining rights and making them pay more for healthcare and pensions. A previous article partly explained, accessed through the following link:

Included is more, repeating some of what the bottom link covers:

(2) "Power Plant Privatization and Environmental Neglect:" Use the above lower link for full coverage.

(4) "Destroying Wetlands:" Walker's bill "exempt(s) a parcel of wetland owned by a Republican donor from water quality standards," and affects the entire county where it's located. Perhaps later the entire state.

(5) "Fiscal Irresponsibility:" Another Walker bill requires a two-thirds supermajority to raise taxes. "Republican lawmakers are now reportedly considering a constitutional amendment that would make the rule permanent." At issue, is imposing a "fiscal strait-jacket" on Wisconsin residents.

(6) "Disenfranchising Voters:" Another proposed bill "require(s) voters to present a photo ID from the (Department of Motor Vehicles) at the polls," causing added hardships for elderly, disabled and rural residents as well as students and persons without cars.

Fascism landed in Wisconsin under Walker and his cronies, aiming to turn the whole state into Guatemala in the worst sense of its meaning. More than ever, exposing and stopping him is crucial. It's no exaggeration saying, as Wisconsin goes, perhaps also America, a possibility too grim to allow.