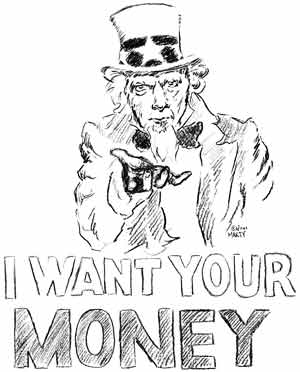 During the past few weeks, Congress has been locked in a battle to pass a continuing resolution to fund government operations through September. Both supporters and opponents of the bill - HR1 - claim it is a serious attempt to reduce federal spending. However, an examination of the details of the bill call that claim into question.

For one thing, the off-sided assertion that HR1 reduces spending by $99 billion is misleading. The $99 billion figure merely represents the amount that HR1 reduces spending from the president's proposed Fiscal Year 2011 Budget, not reductions in actual spending. Trying to claim credit for reduction in spending based on cuts in proposed spending is claiming that someone is following a diet because he had only 5 slices of pizza when he intended to have 10 slices. In fact, HR1 only reduces real federal spending by $66 billion compared to last year's budget. This may seem like a lot to the average American, but in the context of an overwhelming trillion dollar budget and a national debt that could exceed 100% of the GDP in September, it is barely a drop in a bucket.

One reason that HR1 does not cut spending enough is that too many fiscal conservatives continue to embrace the fallacy that we can balance the budget without reducing spending on militarism. Until Congress realizes the folly of spending trillions and pretending to impose democracy on the world, we will never be able to seriously reduce spending. Congress must not only reject the warfare state, it must also reject the welfare state. HR1 is more aggressive in any domestic spending than foreign spending, and does zero on some objectionable programs, such as AmeriCorps.

However, HR1 leaves most of the current functions of the federal government undisturbed. This bill thus continues the delusion that we can have a fiscally responsible and efficient welfare state. The failure to even attempt to address the serious threat the welfare-warfare state imposes to American liberty and prosperity is the main reason why supporters of limited government and individual liberty ultimately should find HR1 unsatisfactory. Only a rejection of the view that Congress can run the economy, run our lives, and run the world, will allow us to make the spending reductions necessary to avert a serious financial crisis.

This does not mean we should not prioritize and discuss how to gradually transition away from the welfare state, in a manner that does not harm those currently relying on these programs. However, we must go beyond balancing the budget, to transitioning back to a free society. And that means eventually placing responsibility for social welfare back in the hands of individuals and private and institutions. Despite the overheated rhetoric heard during the debate, HR1 is a diversion of the difficult task of restoring constitutional government and a free economy and society.

It is time for Congress to get serious about cutting spending, not merely tinkering around the edges of the proposed budget and kicking the can down the road for future generations. If we fail to act decisively now, there will soon come a time when both our money and our capacity to borrow will run out. When that happens, our ability to negotiate and play political games with spending priorities will be over. To avoid real chaos, the time to start dealing with our bloated government budget is right now.
source