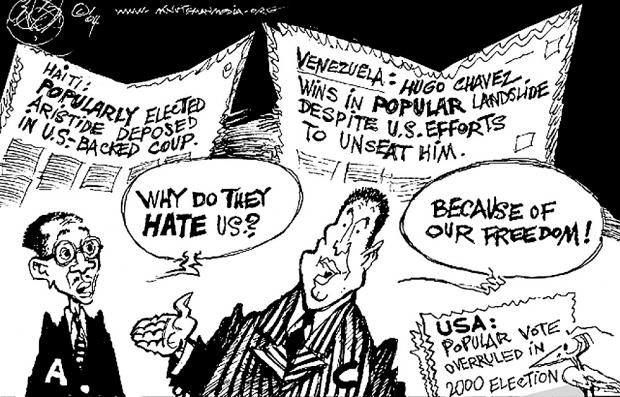 He's lived in exile since US marines forcefully ousted him at gunpoint on February 29, 2004. Efforts to help him return followed, what he's wanted for eight years today, the anniversary of his abduction.

Noted figures wrote "South African President Jacob Zuma an open letter 'in hopes that (he'll) assist' former (President) Aristide and his family (return) to Haiti 'as soon as possible.' " Among them were:

-- Jack Heyman of San Francisco's International Longshore and Warehouse Union, who refused to unload ships with South African goods in the 1980s;

Their letter in part read:

"We write in the hopes that you can assist the Aristides in making their transition as soon as possible. The situation in Haiti remains dire, and the Aristides have expressed their willingness to help Haiti rebuild, through education initiatives and in other desperately-needed areas. Many people in Haiti have been greatly inspired by the news of the issuance of (his) passport..."

Delaying his return would be a major "disappointment to a people that have already experienced a long list of tragedies, disasters, and heartbreak....(We) support the efforts of the South African government to assist President Aristide and his family in quickly returning home. And we hope to see (him) in Haiti very soon."

What Looked Imminent Is Now Delayed

Weeks after receiving his diplomatic passport, "unresolved security and logistical concerns" delayed him. Aristide's lawyer, Ira Kurzban, accused Washington and France of obstructing his efforts to return. On February 18, Haiti's Foreign Minister, Marie Michelle Rey, said she had no contact with her South African counterpart.

On February 19, Kurzban wrote her, asking that:

"appropriate dialogue (be initiated) with the government of the Republic of South Africa to insure President Aristide's immediate return to Haiti....I am inquiring as to what steps you have taken....to resolve (his) return to Haiti. As you are well aware, President Aristide is not simply another citizen returning to his country. You are well aware of the circumstances in which he was forced to leave Haiti notwithstanding his position as the democratically elected President at the time. His forced trip to the Central African Republic and his current stay in South Africa are well documented."

"I know that certain countries have voiced concern about (his) immediate return (meaning America). We know, however, those concerns are without foundation and that the President's return would be a joyous occasion for the vast majority of Haitians. Many Haitian citizens have already gone to the airport in anticipation of his return."

"The idea that Aristide can simply get on a plane and come back to Haiti ignores the fact that....(t)here are security concerns and powerful governments....have already expressed a desire to keep him out of the country," especially ahead of the March 20 runoff elections.

Meanwhile Haiti's Prime Minister, Jean Max Bellerive, said Aristide "can go home whenever he wishes," ignoring the need for pre-arranged security and America's long-time opposition. Revealing his complicity with Washington, he added, "This country needs to be rebuilt and that needs to be the priority right now," despite knowing Aristide's inspirational presence would be a boon, not bane to reconstruction.

"I formally deny these accusations as false and say to the Haitian nation that I am not cooperating and did not make any deal with anyone. I take this opportunity to reiterate my firm determination to defend myself against charges brought against me."

In earlier articles, she was caught red-handed making spurious charges, destroying her credibility as a legitimate journalist.

As of now, Aristide awaits approval to go home, unable to without proper arrangements and pre-arranged security, befitting a former head of state. Political activist Patrick Elie, formerly part of the Aristide and Preval governments, blamed Fanmi Lavalas for delay, saying the groundwork hasn't been prepared for "somebody who is a living symbol," then adding:

"I won't sit back and let him become a martyr," meaning assuring his safety ahead of time is essential, given dark forces opposed to his presence, the same ones responsible for exiling him in 2004. They're not shy about using violence to get their way, making security a top priority.