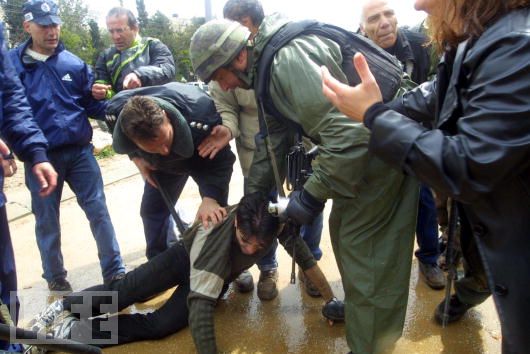 The web site apartheidweek.com announced it in over 60 cities worldwide, including:

Other cities not officially part of IAW may also participate, including major ones involved before.

Launched in Toronto in 2005 by over 170 Palestinian civil society organizations, it's held annually to support calls for Global Boycotts, Divestment and Sanctions (BDS) until Occupied Palestine is free.

Last year's IAW was "incredibly successful" with over 55 participating cities worldwide. Planned again are lectures, multimedia events, films, cultural performances, demonstrations, and other actions to highlight successes and injustices that make BDS efforts crucial to end Israeli occupation and apartheid. Each city has its own schedule and speakers. Organizers urge everyone this year to join the anti-apartheid struggle for justice, equality and peace.

Because of IAW's popularity, greater flexibility this year will accommodate campuses, organizations, cities and regions on different schedules to participate more conveniently:

Background on the Initiative

So does the Coalition Against Israeli Apartheid (CAIA), "a network of concerned individuals and organizations working to end this" grave injustice. Formed in January 2006, it calls Israel an apartheid state, resembling South Africa in the 1980s and earlier. America and Western governments provide political, economic and military support. Ending it is crucial to liberating Palestine.

"As long as in this territory west of the Jordan River there is only one political entity called Israel, it is going to be either non-Jewish or non-democratic....If this bloc of millions of Palestinians cannot vote (or if doing so is meaningless), that will be an apartheid state."

"If the day comes when the two-state solution collapses, and we face a South African-style struggle for equal voting rights (including for Occupied Palestinians), then, as soon as that happens, the State of Israel is finished."

Israel's policy of occupation and separation perpetuates "worse....apartheid than we witnessed in South Africa." He hoped his book would stimulate debate. "There's never been (any) on this issue of any significance. Israel will never have peace until they agree to" end occupation and grant Palestinians self-determination.

"The system preserving this apartheid is more ruthless as it is equipped with the lie of being 'temporary.' " A rigid legal system perpetuates it. Decades of Palestinian suffering show the challenge of achieving change. Yet international law is clear and unequivocal.

Article 7(1)(j) of the Rome Statute of the International Criminal Court calls apartheid a crime, stating:

"For the purpose of this Statute, (a) 'crime against humanity' means any of the following acts when committed as part of a widespread or systematic attack directed against any civilian population, with knowledge of the attack:

The crime of apartheid" includes murder, extermination, enslavement, torture, arbitrary arrest, illegal imprisonment, denial of the right to life and liberty, cruel, inhuman and degrading treatment, and other abusive acts imposed by one group on another.

Racist Zionist exclusivism is key to understanding Israeli policy. It flaunts Judaic values. It's extremist, undemocratic and hateful. It denies non-Jews equal rights, claims Jewish supremacy, specialness and uniqueness, eschews peace and reconciliation, chooses confrontation over diplomacy, believes in strength through belligerence and intimidation, and threatens Jews and non-Jews alike as a result.

Under it, apartheid flourishes by separating indigenous Palestinians from their land and heritage.

The Convention on the Suppression and Punishment of the Crime of Apartheid (the Apartheid Convention) defines it as:

The Convention on the Elimination of Racial Discrimination defines it as:

"any distinction, exclusion, restriction or preference based on race, color, descent, or national or ethnic origin which has the purpose or effect of nullifying or impairing the recognition, enjoyment or exercise, on an equal footing, of human rights and fundamental freedoms in the political, economic, social, cultural or any other field of public life."

The 1977 Additional Protocol to the Geneva Conventions (Protocol I) includes among other grave breaches:

"practices of apartheid and other inhuman and degrading practices involving outrages upon personal dignity, based on racial discrimination."

Besieged Gaza Calls for the Largest Ever IAW

On February 13, Gazan students, artists, intellectuals, teachers, activists, and others "urge(d) international solidarity groups and individuals....create a week of action against Israeli Apartheid, as well as support for BDS campaigns globally. After last year's successful event, they're organizing their own Apartheid Week activities, including offering to connect through Skype video conferences and radio interviews, breaching Gaza's siege electronically.

Now's the time they say to highlight Israeli barbarity to enlist greater than ever support for liberation. "How long must we, Palestinians in Gaza, be told that it's okay for us to live under a medieval siege of our land, air and sea?" How long must their suffering continue, while they "await more massacres, more land confiscation, more imprisonment, and more racist subjugation....The sooner and more powerfully we act, the" sooner Palestinians will enjoy "the same human rights as anyone else, instead of this life of captivity, humiliation, shattered dreams," and daily misery. Achieving change "is up to us" with your help.

Annually, IAW events are planned globally in dozens of cities, including on campuses and other sites as part of a campaign to promote BDS initiatives and delegitimize Israel, exposing it as a racist apartheid state, one doomed to fail like South Africa. The more global participation grows, the sooner that day will arrive. It's not a question of if. It's when Palestinians are again free. For them and supporters worldwide, it can't come a moment too soon.