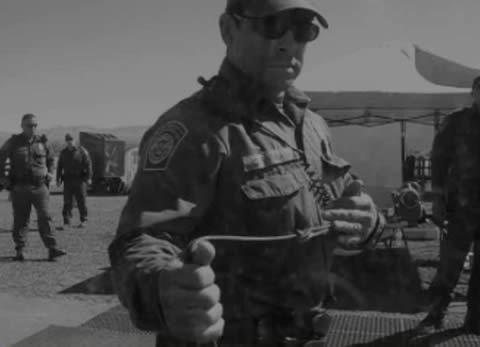 It's been a while since I've posted a new video of my suspicionless homeland security checkpoint encounters along SR86 in Southern Arizona. On Friday February 25, 2011 however, the actions of Border Patrol field supervisor Trevino who seized me at the primary stop location near mile marker 147 managed to bring me out of hibernation. Unlike most of my other encounters over the last year or so, Agent Trevino didn't just wave me through but rather wanted me to roll down my window. When I politely declined Trevino's invitation to give him access to the interior of my vehicle, he decided to detain me at the checkpoint until the K9 handler was through harassing another unlucky soul in secondary inspection and had time to divert the dog's attention to me.

While waiting, I asked Trevino who his supervisor was which prompted him to indicate he was the supervisor and arrogantly declare he was the one asking questions here not me. Perhaps forgetting he was merely a public servant in a country where individuals have rights, I reminded Trevino that everyone (in the Border Patrol) has a supervisor and I was also asking questions. Trevino then proceeded to ignore me while continuing the detention. In fact, he ignored me so much, he failed to ask any questions or show any interest in my immigration status.

Given that the only legitimate purpose of an immigration checkpoint removed from the border is to make immigration queries, it was pretty obvious Trevino knew I was traveling within the country lawfully but continued detaining me in violation of Border Patrol policy and federal supreme court case law anyway. He did this in order to allow the K9 handler time to bring his drug-sniffing dog around to my vehicle. This represented an extended detention absent reasonable suspicion, let alone probable cause, that I was transporting anything illegal in the vehicle (assuming the dog wasn't trained to detect which vehicle occupants are lawfully in the country and which aren't...)

The handler brought his dog over to and around my vehicle. Towards the end of the video just prior to being waved through, the handler allowed his dog to jump up on my vehicle & its nails to slide down the paneling showing that not only do these agents have no respect for the rule of law but no respect for private property either.

Towards the end of the video clip, I included a section of video from Steven Anderson's court appearance back in December of 2009. Additional information regarding Anderson's experience at a suspicionless internal checkpoint can be found here.
Finally, to place this within proper geographic context, the suspicionless homeland security checkpoint depicted in this article, where armed Border Patrol agents (who aren't actually patrolling the border) hang out to harass domesitc traffic absent individualized suspicion, is located along an East-West highway over forty miles North of the border and never intersects the border at any point. Rather, it connects local communities in Southern Arizona and local residents have no recourse but to put up with this crap on a daily basis while going about their lives and trying to get to and from work.
Welcome to Checkpoint USA!