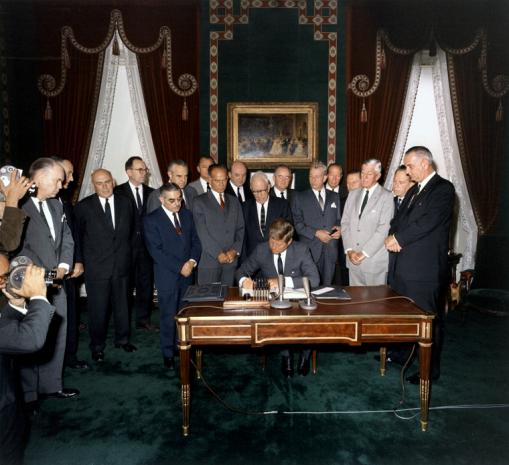 John F Kennedy Lyndon Johnson Averell Harriman
Assassination of President John F Kennedy, Our National “Who-dun-it?”. Historian Stephen Alvis explains the relationships of many of the players involved in the Coup d'état in the united States on November 22 1963.   The New York Establishment led by Averell Harriman, coordinates with the CIA Assassins to take out President Kennedy as he not in control by his handlers.
Historian & CFR member, Arthur M. Schlesinger, Jr., in his book on the Kennedy presidency, A Thousand Days, wrote that Kennedy had no part in the “New York establishment.”

One of the movers in the “New York establishment” was Averell Harriman (administrator of Lend- Lease, ambassador to Soviet Union, Truman’s Secretary of Commerce, Governor of New York, negotiator of the Nuclear Test Ban Treaty, Vietnam peace chief negotiator, & founder of the magazine that became Newsweek).

Averell Harriman (1891-1986) was the son of Union Pacific railroad robber baron and shipping magnate E. H. Harriman. Born to riches, young Averell attended Yale University where he was initiated into the infamous Skull & Bones secret society. In the 1920's, Harriman and Bones buddy Robert Lehman organized Pan American Airlines. By 1932, Harriman sat on the boards of 54 corporations, including Mobil Oil.

Who Killed the President? Harriman dictated policy in both the Kennedy and Johnson administrations. Known in his later years as the “Old Crocodile,” Harriman bullied his way even in the White House. In the Kennedy admin, Averell Harriman was made undersecretary of state for political affairs.  The big issue in mid-1963 was Vietnam. “Consensus reigned in the East Coast ‘Establishment.’ . . . in late August 1963, as the United States i.e.: Harriman moved to oust the South Vietnamese leader Diem it had backed for the past nine years . . . American officials i.e.: Harriman always opposed to an early settlement and possessing an agreement with London to work to prevent one, had seen no reason to feel particularly fearful of the prospect Choosing War: The Lost Chance for Peace and the Escalation of War in Vietnam, , p.42.”

The East Coast ‘Establishment’ was in agreement with “London” about pursuing war in Vietnam, and therefore senior officials at the White House had no fear to proceed with overthrowing the elected government of our ally, South Vietnam. Without presidential approval and behind Kennedy’s back while he was vacationing at Hyannis Port, Harriman and his cronies cabled Henry Cabot Lodge, Jr., the American ambassador in Saigon, to green light South Vietnamese officers to launch a coup to overthrow President Diem of South Vietnam (Cable 243).
John Kennedy was outraged, and in the ensuing Executive Branch furor over the August 24 cable, Attorney General Robert Kennedy blamed Harriman for this “major mistake,” realizing that “the government was broken in two in a very disturbing way (Robert F. Kennedy, In His Own Words, p.397).”

The power-behind-the-throne who ordained one assassination ordained the other. Besides offending Harriman, John F. Kennedy had signed his own death warrant by defying the shadow government in four fatal objectives:

1. Offending the Fed — He authorized the printing of $450 billion in non-debt “United States Notes”, a move to dismantle the Federal Reserve System (Executive Order 11,110—1963).

2. Offending Big Oil — He moved to rescind the special tax privileges of the oil industry.

3. Offending War Industrialists — He vowed the removal of all 12,000 U.S. servicemen (advisors) from Vietnam by the end of 1965, a heavy blow to the military-industrial complex and  the helicopter division of Bell- Textron, Inc., which sold over 5,000 copters for the war; Bell-Textron’s R&D director was Nazi war criminal General Walter Dornberger.

4. Offending the CIA — He fired Allen Dulles (CFR) from his post as director of the CIA, and determined in October 1963 to “splinter the CIA into a thousand pieces and scatter it to the winds”. These wise decisions made Kennedy “a national security threat.”

November 22, 1963,  Witnesses heard a shot and saw a puff of smoke coming from a fence on the grassy knoll, where police and others converged immediately after, as shown on photos and film. A large-caliber bullet slug was found opposite the knoll on the far side of Elm St., surrounded by bits of apparent brain tissue. Shots were coming from various directions. No need exists for Arlen Specter's “Magic Bullet” as hypothesized in the Warren Report.  The “policeman” behind the fence on the grassy knoll has been identified as Roscoe White, a contract killer for the CIA through U.S. Naval Intelligence, code name MANDARIN. White had previously executed 10 foreign officials for the “company,” and had worked with Oswald at the CIA’s U- 2 control station at Atsugi AFB in Japan. White’s wife had worked for Jack Ruby.

A message cable in the deceased White’s effects instruct him to “eliminate a national security threat to world peace. Destination will be Houston, Austin, Dallas. . . . C. Bowers. RE Rifle.” A follow-up cable, dated September 1963, says: “Dallas destination chosen. Your place is hidden within the [police] department.”
Almost 200 witnesses linked to the assassination have met with violent or mysterious deaths— some by gunfire, some in car accidents, some by apparent suicide, one from a cut throat and another by a karate chop to the neck, and lesser numbers from more “natural” causes. At midday,

November 22, 1963, immediately after hearing of the murder from Senator Frank Church, Averell Harriman went on to a meeting with other top oil executives where they discussed how to manipulate the new president being sworn in on Air Force One while flying back to Washington with Kennedy’s corpse. Lyndon Johnson confided to one of his aides in 1967 that “he was now convinced that there was a plot in connection with the assassination.” Further, LBJ suspected that the CIA had “something to do with this plot.

In 1978, when CIA spy E. Howard Hunt (one of the Nixon Watergate “plumbers”) sued Liberty Lobby for $650,000 for defamation in a Florida court, he lost his case. He sued because their Populist newspaper Spotlight had reported he was in Dallas the night before Kennedy’s killing to pay off a CIA-backed assassination team. Reportedly, Hunt huddled with Jack Ruby in Dallas the night before the assassination to supply him with a gun and money. During the Watergate scandal, Nixon was recorded saying, to H. R. Haldeman, “This fellow Hunt, he knows too damn much (Weiner, Tim, ‘E. Howard Hunt, Agent Who Organized Botched Watergate Break-In, Dies at 88,’ New York Times, January 24, 2007).” The dying Hunt disclosed to his son, Saint John Hunt, that he and others were involved in the conspiracy to kill President Kennedy, an operation codenamed, “the Big Event”

More interesting is CIA agent Marita Lorenz’s testimony in Hunt vs. Liberty Lobby, that the CIA directly participated in planning and executing President Kennedy’s assassination, an admission that the media present chose not to mention in their trial coverage. According to Lorenz, she rode from Miami to Dallas with two carloads of armed assassins. She named each of them while under oath, and quoted their proud leader as saying, that they pulled off “the really big one. . . we killed the president.”

It is more than interesting that Richard Nixon, Kennedy’s vindictive opponent in the previous election and one who ultimately replaced him, had long-time personal ties to Oswald’s hitman, Jack Ruby. A 1947 FBI memo says: “Nixon intervened on behalf of a Chicago gangster who was about to be called as a witness before a congressional committee . . . It is my sworn statement that one Jack Rubenstein of Chicago, noted as a potential witness for hearings of the House Committee on Un- American Activities, is performing information functions for the staff of Congressman Richard Nixon, Republican of California. It is requested Rubenstein not be called for open testimony in the aforementioned hearings . . . That same year, Rubenstein moved to Dallas, Texas, and changed his name to Jack Ruby (cited in Called to Serve, p.534).”

The jailed Jack Ruby’s last words to the uninterested party of Chief Justice Earl Warren, Representative Gerald Ford (a Bilderberger while yet in Congress and President after Nixon), and Leon Jaworski (later Watergate’s special prosecutor), are especially telling: “Gentlemen, unless you get me to Washington, you can’t get a fair shake out of me . . . My life is in danger here. Well, you won’t ever see me again . . . A whole new form of government is going to take over the country, and I know I won’t live to see you another time . . . I want to tell the truth and I can’t tell it here.”

The “investigators” left for lunch and never returned. He died shortly after of cancer in prison, never having testified publicly. Where they were when they heard about the Kennedy assassination — except one man — Richard Milhous Nixon. He was in Dallas that very day with the very CIA men involved, but afterwards forgot where he was.

2 Comments in Response to The Kennedy Assassination

None of the so called "truths" about the Kennedy murders have ever hit the real reason or mentioned the first murder in the series. Then Sen. Percy had a daughter murdered to force him to drop the Anti Organized Crime and Corruption in Government Bill that was a joint action by the Kennedy brothers in opposition to their party. The brothers continued to press the bill that LBJ shelved and Bobby wanted to have as his platform. The Washington elite love their corruption all the way to the bank. That they have murdered their own to protect the secret is proof of this. Both parties love it and are sure that they cannot be stopped. As an Honorably discharged Veteran of the 60's through the 80's I worked with some of the participants in these crimes and hoped to see it come out one day. Everyone wants to blame some entity other than the corrupt politicians that arranged it all. The same crowd still has power over the same people. Just last October they gave away the last of the huge mineral reserves belonging to the American people and no one noticed. The EPA would not let Americans mine it and now foreigners are strip mining "environmentally sensitive" lands in the USA that are being shipped overseas and we get nothing for the values taken. The politicians all got generous stock packages from the foreign conglomerates so they can have club med with the foreign jet setters. Those mineral resources could have paid the national debt and were denied to American miners. If you believe that any politician in Washington is trustworthy I have some potentially valuable property to sell you.

The power of serious historyscoping is melting away the cover story. Master the key facts free with the Historyscoper at: