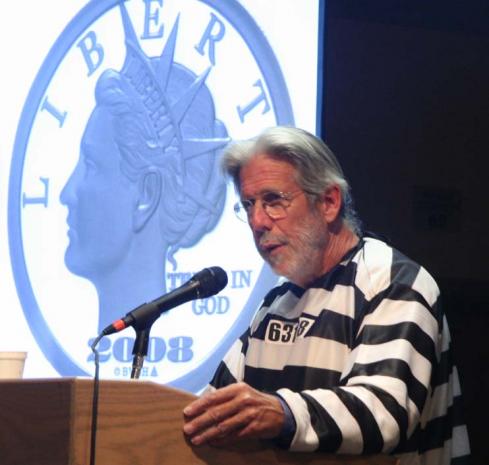 Great reporting job !   There seems to be a blackout of news concerning the Liberty Dollar trial and I am grateful for the insight that this article provides.  I just hope Heather can and will continue with updates.

We are gradually losing all our rights in this country.  The Liberty Dollar represents one of the freedoms that is hanging in the balance right now.  I sure hope BVNH prevails but I am very concerned that the powers that be will crush him.  Truth and justice are no match for the one-sided government monopoly on the "justice system".

The updates are now available at www.Libert4Free.com. I am still catching up but will get there as soon as possible. Thanks for your encouragement! Heather Lewis

Amazing! Just a note that the "Liberty" I got in FY2000 and had a face value of $10 is now worth $30+ for the silver alone!  One that I purchased in 2000 for $20 was auctioned for over $500 on eBay! Wow!  The Liberty Dollar "Notes" have all been selling for multiples of their face value -- the $1's fetching as much as $30 each on ebay! The Liberty dollar is AWESOME!  Nobody got screwed except those people whom the GOVERNMENT STOLE THEIR WAREHOUSED METAL FROM! Overall, the Liberty Dollar is the most lucrative "hobby" I ever got involved with!  The ROI on my meager investment has averaged over +2500%! Go LD!

Thank you for a look inside the trial. Excellent summary. Your efforts are appreciated. For Liberty (dollars)

dammitsomuch!  That was two days ago, and I can't find any updates anywhere!  What happened yesterday?