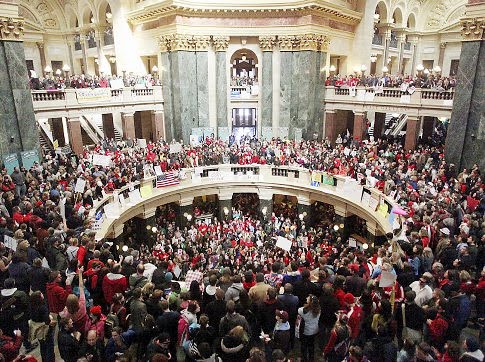 Ralph Nader calls Washington corporate-occupied territory - "every department agency controlled by the overwhelming presence of corporate lobbyists, corporate executives in high government positions, turning the government against its own people."

Nader also said corporations don't just control government, they are the government. "The corporation IS the government!" They bought and own it at the federal, state and local levels, running it like their private fiefdom at the expense of working Americans, systematically stripping them of hard-won rights.

They have 10,000 Political Action Committees and 35,000 full-time lobbyists. "Just imagine," says Nader, "even the Labor Department is not controlled by trade unions - it's (owned and) controlled by corporations."

"The liberty of a democracy is not safe if the people tolerate the growth of private power to a point where it becomes stronger than their democratic state itself. That, in its essence, is fascism - ownership of government by an individual, by a group or by any controlling private power."

Today it's more virulent and pervasive than anything Roosevelt could have imagined, using corrupted politicians to smash worker rights.

It's more evidence of America's fake democracy and the criminal class running it. Politicians are bought like toothpaste. Mock elections pretend to be real. Behind the scenes power players control everything, supported by brazen media misreporting, whether about war and peace, the rule of law, or other vital issues, including worker rights.

Overnight on March 9, fascist Republicans erased them in five minutes, in violation of Wisconsin's open meetings law, requiring "24 hours prior to the commencement of (special sessions) unless for good cause such notice is impossible or impractical."

The measure had nothing to do with budget-balancing. It's corporate ordered union busting. Wisconsin is a microcosm of America, ground zero, now breached as well as Ohio. Expect other states to follow. Public and private sector workers nationwide are losing out - betrayed by brazen politicians and corrupted union bosses, selling out rank and file members for self-enrichment and privilege.

Republicans secretly "devised a plan to get around the impasse and hurriedly approved the bill late in the day." Some financial issues were removed to be voted on separately. Included were provisions raising worker healthcare and pension contributions. Democrat Senator Bob Jauch called it 'political thuggery,' saying 'it's akin to political hara-kiri. I think it's political suicide.' "

Moreover, state and local public employees must pay half their annual pensions cost contributions, and minimally 12.6% of healthcare premiums. In addition, future pay raises are pegged to annual CPI increases, a rigged index not reflecting true inflation. Greater ones may only be approved by statewide referendum, a cumbersome process taking time.

Further, unions must hold annual votes to let workers decide whether or not to be members, and state authorities no longer will collect union dues from paychecks.

On March 10, Wisconsin's Republican controlled State Assembly easily passed the measure 53 - 42. Walker will sign it into law - by diktat, not democracy.

"Protesters took back control of the Capitol on Wednesday night after Senate Republicans" stripped their collective bargaining rights. "Surging past security, (they) reclaimed the Capitol rotunda...."

Others outside chanted, "Let us in." Inside, they yelled, "You lied to Wisconsin" and "Kill the Bill." In a shocking act of betrayal, the Wisconsin Education Association Council (WEAC), representing 98,000 public education employees, instructed teachers to return to classrooms, instead of calling for a general strike to shut down the entire state until the bill is reversed. Growing numbers of teachers and other workers demand one.

Ahead of the Senate vote, email exchanges between Walker and Democrats suggested a deal, involving union certification votes triannually instead of as approved as well as other compromises. All along Democrats, like union bosses, planned capitulation, but needed enough cover to fool constituents.

He's doing it "to avoid mass teacher layoffs and reward our best performers," when, in fact, he and other Democrat and Republican governors and lawmakers are destroying public education in their states, and making public university tuitions unaffordable for millions of aspiring students with inadequate family and personal resources to afford them.

Nonetheless, Walker claimed the bill's passage is "good for the Badger State's hard-working taxpayers. It will also be good for state and local government employees who overwhelmingly want to do their jobs well....Our (union busting) bill is a commitment to the future so our children won't face even more dire consequences than we face today, and teachers (won't have to be) laid off (so) government (can) work for" everyone in Wisconsin.

It's instructive to remember journalist IF Stone's admonition to young journalists, telling them:

"All governments lie," or at other times, saying, "All governments are run by liars and nothing they say should be believed." Who better than Walker and Obama prove it. Like other corrupted politicians, the president is no friend of labor.

Wisconsin Republicans' Wednesday night putch was preceded a week earlier by Walker demanding at least $1.5 billion in budget cuts, besides earlier ones enacted, including:

-- $1.25 billion from schools and local governments, including $900 million in education funding (or $500 per student), exposing his real education agenda;

-- $500 million from Medicaid at the expense of a million needy Wisconsinites dependent on it; and

-- $250 million from the University of Wisconsin, besides sharp tuition hikes, wage and benefit reductions, separating the main Madison campus from others, and possibly privatizing the system, ruining it by selling it off to profiteers.

Now, with collective bargaining gone, all other rights are threatened, except one - a mass action general strike, shutting down the state, staying out until Walker's coup is reversed. Protests aren't enough. Inflicting pain on politicians and corporate interests is crucial. Nothing less can work with firm non-negotiable demands for:

-- social spending increases, not cuts, especially for healthcare, education, and aid to Wisconsin's most needy;

-- recalling all Democrat and Republican politicians, eligible under state law, requiring one year in office before possible; and

-- replacing corrupted union bosses who sold out their rank and file members for self-enrichment and privilege.

Negotiations failed. Mobilized, committed, unified mass action is essential as quickly as possible. On Wisconsin! Then take the campaign nationwide, especially to ground zero in Washington, the heart of corrupted power.