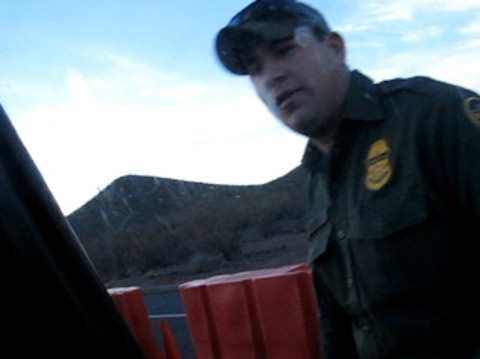 While traveling back from a remote worksite on the afternoon of Thursday January 20, 2011 along SR86 in Southern Arizona, I had an experience at the Homeland Security checkpoint located near mile marker 147 that pretty much summed up many of my encounters at this internal suspicionless checkpoint over the past few years.
As I was coming to a stop at the checkpoint, the resident K-9 handler recognized me and yelled out the following warning to his fellow agents:
"It's that guy, guys"
Having been duly warned, the Border Patrol agent who appeared to be in training at the primary stop location asked in response:
"What do we usually do? Just f_ck with him?"
Although I couldn't quite make out what was said, one of the other agents ran up to the back of my vehicle and told the agent at primary to essentially wave me through. The agent at primary turned his attention back to me and with a dismissive gesture stated:
"All right...get out! Go ahead!"
As I started pulling away from the checkpoint without saying a word, I heard a thump towards the rear of my vehicle. As I looked back to see what had happened, I saw the agent who had just dismissed me smiling at his fellow agents while pulling his hand away from the place he had just struck.
As I continued to pull away, it occurred to me that the reactions of the agent at primary were probably the most honest ones I had encountered during my compelled interactions at these checkpoints over the past three years. He most likely understood that given their abysmally low interdiction rate, the checkpoint wasn't really there to interdict illegal immigrants which is its only lawful function. And it wasn't really there to interdict illegal drugs or stop other criminal activity either (assuming it's all right to engage in illegal enforcement operations to stop non-government sanctioned illegal activity to begin with).
What the agent at primary understood and re-iterated for the world to hear was that the primary purpose of internal homeland security checkpoints is to f_ck with people to make them compliant to arbitrary interference in their daily lives. Arbitrary interference in the form of arbitrary orders from government agents wearing shiny badges on their chests and sporting nifty compliance weapons on their hips or their shoulders. In other words, the primary purpose of internal homeland security checkpoints is to engage in general public obedience training much like pet owners will train their dogs.
With this understanding, it's easier to understand how agents like the one at primary in this video ever make it far enough in the Border Patrol hiring process to be standing in the middle of a public highway representing the best the Border Patrol has to offer to the people the agency claims to be serving. It also makes it easier to understand the quotes from a former Border Patrol agent appearing below:

"We have lowered our standards to an all-time low to fill positions."

"We have recently hired known criminals, drug smugglers, gang bangers, people out of drug rehab, pizza delivery guys (from a national chain), people who write on a fifth-grade level, and, yes, even illegal aliens."

When I first came across these quotes several years ago, I thought they were merely an exaggeration regarding Border Patrol hiring practices. Given that the quotes originated from a well-regarded Border Patrol agent who also served as the President of the San Diego Sector Local 1613 Border Patrol Union forced me to re-evaluate however.
When these quotes were initially made in 1998, they represented a time in which the Border Patrol had doubled in size from ~4,000 agents to ~8,000 in a four year period. Today, there are approximately 20,000 agents in the Border Patrol while the hiring practices condemned by Agent Dessaro more than a decade earlier are very much alive and well.
Agent Dessaro stayed in the service for several years after condemning evolving Border Patrol hiring practices. He finally resigned in disgust in 2005 however, two years after the Border Patrol was moved from legacy INS to Customs and Border Protection (CBP) under the Department of Homeland Security (DHS). A quote from his resignation letter summed up his reasons well:

"On the Border Patrol; during my tenure with this agency, I watched the Border Patrol mature into something it should not be: one of the most inefficient and misleading agencies in the history of government. The merger into the Department of Homeland Security only exasperated previously existing problems under the legacy Immigration and Naturalization Service. Subsequently, I believe this agency, as a government organization and employer, is beyond redemption"

Quite a strong condemnation of the U.S. Border Patrol by Agent Dessaro. Unfortunately, given what we know about the agency years later, it would appear he was right on in his analysis.
The first comprehensive news articles I came across on the subject appeared in the Tucson Citizen in 2002. The three articles that initially caught my attention included the following:
* Screening of job-seekers minimal
* Crossing the line
* Watchdog Overwhelmed
Since 2002, things have only gotten worse as the agency continues to hire unqualified and unscrupulous individuals to fill open slots. The results have been disastrous with a constant flow of news articles highlighting Border Patrol agent malfeasance and report after report from the Department of Homeland Security Inspector General's Office detailing ever-increasing corruption throughout DHS generally and within the Border Patrol specifically.
So what does all this have to do with the video appearing above? It provides background information needed to understand how it is that some random individual is in a position to (legally?) seize people inside the country absent suspicion under threat of lethal force along a public highway for the primary purpose of f_cking with them and messing with their private property. All with the full support of the Department of Homeland Security.
Welcome to Checkpoint USA.

2 Comments in Response to Primary Purpose of DHS Checkpoints Revealed

You can hear the thump from the hit in the raw video but the video conversion & compression from avi to wmv for editing & wmv to flv during the youtube upload has significantly muffled the sound. Additionally, I still don't have a camera head that provides the field of view coverage I want leaving several blind spots on either side of the rear of the vehicle.

I'll be remedying these deficiencies in the near future though.

Terry, I did not see the agent hit your car. Good work as usual! I like the review camera as well. Good idea. KC