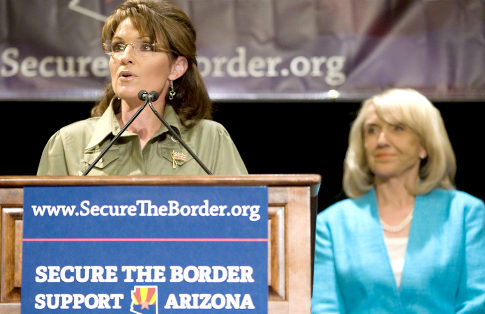 The political class has been a'buzz this last week over news that Sarah Palin is seemingly establishing even stronger ties to Arizona, and more specifically Scottsdale.
At first, the speculation was that the Palin machine was looking to base their campaign headquarters for a presidential run in Scottsdale. Not all of the reasoning for why is clear, but it is generally agreed that Alaska is a poor place geographically from which to engage in national politics. And if you want to be someplace friendly to convsevatives, yet showcase your independence by not being based in D.C. or N.Y.C. or L.A.,...Scottsdale is nicely unique. Homes were recently bought in Scottsdale by people with the same names as Sarah's sister and father. And daughter Bristol bought a home in nearby Maricopa last year. Supposedly to attend ASU, but suddenly was offered a job as co-host of the morning radio show on Mix 96.9, a youthful channel that is demographically aimed at her peers. Curious.
Anyway,...plenty of people have been listening to polls about who is likely to win the next presidential nominations, and it is continuously reported that despite having been highly regarded by Republicans shortly after the 2008 race, Palin seems to keep falling in esteem among critical voters. Critics keep claiming that it is foolish of her to think she could actually get her party's nomination in 2012, much less win against Obama. Many such critic say she is to inexperienced, and that if but she were to serve as a Senator or something for a few years, perhaps then she might be ready for the White House.
Perhaps she agrees.
Local GOP players have been leaking to various people on the left that Sarah's plans for basing in Arizona have nothing to do with a Presidential bid, but in fact she has an eye on running for the Senate seat being vacated by Jon Kyl. Just as John McCain established residency here for less than a year before running to take over Goldwater's seat, it is alleged that Sarah will shortly be moving in with either her daughter or perhaps one of the other Palin clan properties in Scottsdale, in order to qualify for Arizona residency in time for the election schedule.
So far, Rep. Jeff Flake is the only Republican to announce an intention to run for Kyl's seat. Although others such as Rep. Trent Franks and former Rep. J.D. Hayworth have been said to have expressed interest as well.
Can you imagine? McCain and Palin, now teamed up as co-senators from the same state?
Already the jokes have begun about how she could see Mexico from here.
And since the prevailing winds from Japan that are likely to carry nuclear fall-out across the Pacific soon tend to wash over southern Alaska, Canada, Washington and Oregon,...perhaps its a good time to move here anyway.
Some links to local coverage of this rumor, which will soon become national coverage.
http://blogs.phoenixnewtimes.com/valleyfever/2011/03/is_sarah_palin_considering_a_s.php
http://www.azcentral.com/news/Blog/azdc/121533
(LTE - from reader clearing up some dates http://www.freedomsphoenix.com/Letter-to-Editor.htm?EdNo=001&Info=0137826)

1 Comments in Response to Sarah Palin to run for senate in Arizona?!?!

Maybe she can twerk on Jeff Flake.