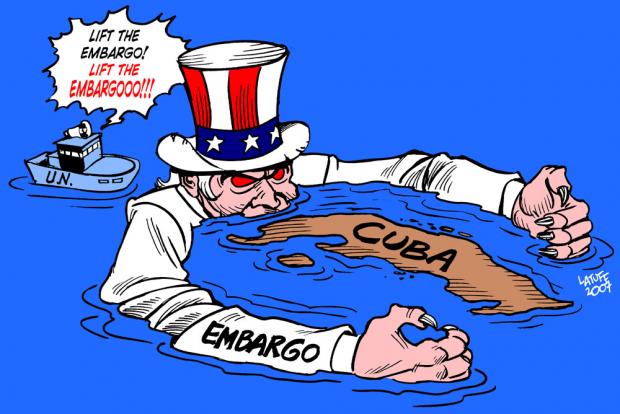 Our Man in Havana - by Stephen Lendman

Against the backdrop of US - Cuban relations, the Havana Times broke the news, headlining on March 12, "Cuba Finds Alan Gross Guilty, Gets 15-Years," saying:

A US citizen, he was arrested on December 3, 2009, attempting to return home after his fifth Cuban visit in nine months, traveling on a tourist visa in spite of coming for other purposes.

On March 12, he was convicted for "Actions against the Independence and Territorial Integrity of the State....while working for a (USAID) funded program seeking regime change in Cuba." In other words, for spying and involvement in destabilizing, subversive activities.

"We have made it very clear to the Cuban government that the continued detention of Alan Gross is a major impediment to advancing the dialogue between our two countries....He was in Cuba to help the Cuban people connect with the rest of the world." Apparently, he was up to no good, caught, and now imprisoned.

He may appeal to Cuba's Supreme Court. On March 12, his lawyer, Peter Kahn, said doing so was being considered, adding:

"We will continue to work with Alan's Cuban attorney in exploring any and all options available to him, including the possibility of an appeal."

The Cuban News Agency's web site said during trial proceedings, Gross "had recognized having been used and manipulated by USAID."

In mid-2010, Washington ruled out exchanging him for the bogusly convicted Cuban Five. More on them below.

Washington called him a "humanitarian" bring(ing) satellite telephone equipment....to the small community of Cuban Jews," an implausible purpose on its face. More likely, it was cover, Cuban authorities saying he was convicted for taking part in "a subversive project of the US government that aimed to destroy the revolution through the use of communications systems out of the control of authorities."

An employee of the Bethesda, MD-based Development Alternatives Inc. (DAI), he performed USAID subcontractor services, a government agency involved (among other activities) in funding opposition groups in countries like Venezuela and Cuba, used for propaganda and other destabilizing purposes.

Washington, in fact, spent $2.6 million defending Gross, ostensibly because he "supported democracy" in Cuba, a laughable reason on its face.

Lopez-Levy said other visiting Jewish delegations have no "declared strategy of imposing regime change in Cuba." In fact, US laws endorse it, including the 1992 Cuban Democracy Act, authorizing financial help to individuals and organizations working for "non-violent democratic change." In other words, replacing Cuban socialism with predatory capitalism, besides turning the state into a brothel as in pre-Castro days.

According to Cuban-American lawyer Jose Pertierra:

Under George Bush, "the budget for fomenting an opposition in Cuban society allied to the interests of Miama (where most Cuban expats live) and the White House increased astronomically, from $3.5 million in 2000 to $45 million in 2008." Gross apparently benefitted handsomely until arrested.

Cuban authorities also believe that internal opposition exists largely because of US financial and logistical support. Whether or not so, for sure they've regularly gotten it for decades. Moreover, Cuba accuses USAID of waging internal cyberwar, instigating disruptive instability.

On December 10, Parliamentary President Ricardo Alarcon said, Gross "violated Cuban laws and national sovereignty and has committed crimes which in the United States can carry heavy sentences." Indeed so as a previous article explained, saying:

All countries have laws against espionage and subversion; that is, for covertly obtaining secret information without authorization or conducting destabilizing activities, especially related to national defense or security. America's 18 U.S.C. § 793 : US Code - Section 793: Gathering, transmitting or losing defense information is relevant, accessed through the following link:

Covering a detailed list of offenses, it says anyone found guilty under this title shall be fined and/or imprisoned for up to 10 years or longer, in some cases for life, depending on the crime's severity.

"We warned a year ago that Castro would use this incident to test Mr. Obama, and Mr. Gross' trial is a sign that the regime believes it has nothing to worry about."

The WSJ and other major media ignore over five decades of US state terrorism, including the failed Bay of Pigs invasion, harsh sanctions, and violent and other type internal subversion attempts to reverse Cuba's revolution, to no avail.

A previous article discussed the Cuban Five, accessed through the following link:

Arrested in September 1998, a Florida grand jury accused them infiltrating terrorist groups, charging them with 26 offenses, including conspiracy to commit crimes against the United States and espionage. For lack of evidence, the latter charge became conspiracy to commit it.

For over 12 years, they've been horrifically treated. Pre-trial for 17 months, they were isolated in a Special Housing Unit, for many weeks in separate cells.

In fact, they were in America monitoring Miami-based, US funded, extremist right-wing group terrorist activities against Cuba. Ongoing for decades, declassified US documents showed that from October 1960 - April 1961 alone, CIA operatives smuggled in 75 tons of explosives and 45 tons of weapons. During the period, 110 attacks were carried out, using dynamite and bombs against 150 factories, 800 plantations, and six trains.

From 1959 - 1997, US funded groups and CIA operatives committed around 5,800 terrorist acts, hundreds involving bombings that killed or injured thousands of civilians. In addition, from 1959 - 2003, 61 planes or boats were hijacked. From 1961 - 1996, 58 sea attacks were launched against dozens of economic targets and the civilian population.

Evidence also shows CIA recruitment and support for over 4,000 individuals and 300 paramilitary groups, responsible for murdering hundreds of Cubans and injuring thousands, many permanently disabled. Fidel Castro himself was targeted hundreds of times unsuccessfully.

Moreover, chemical and biological warfare was conducted. In 1971, a biological attack contaminated half a million pigs, then killed to prevent swine fever from spreading. In 1981, introduced dengue fever affected over 340,000 people, killing at least 158 including 101 children. On July 6, 1982 alone, around 11,400 cases were registered.

They harmed no one, committed no crime, did nothing illegal, had no weapons, nor did 119 volumes of testimonies and over 20,000 court pages of documents contain evidence against them.

Nonetheless, their seven-month show trial was orchestrated to convict. As a result, on June 8, 2001, all five were found guilty, then sentenced to four life terms and 75 years, a gross miscarriage of justice. Repeatedly, Cuban authorities denounced it, in vain trying to arrange their release.

On March 8, Cuban representative, Juan Antonio Quintanilla, denounced their incarceration before the UN Human Rights Council (UNHCR). Asking for their release, he urged all UN members to conduct supportive activities.

On March 11, Cuba's UNHCR ambassador, Rodolfo Reyes, read a message from the Five before the Council, in part saying:

"Why what is considered terrorism when practiced against the powerful is not....when (they) commit it? Why a few can attack, massacre and destroy human life on behalf of the alleged fight against terrorism while the victims of their terrorist acts cannot exert the simplest right to defense?"

They concluded saying they'll continue appealing for justice. They've been denied it for over 12 years. US media reports vilified them, the same ones supporting Gross' alleged USAID-funded "humanitarianism," a policy no US agency undertakes, especially an imperial one like USAID.

Often it's subversively partnered with the CIA, National Endowment for Democracy (NED), International Republican Institute (IRI), and other US agencies and groups, disruptively trying to destabilize and oust governments Washington opposes.

Anyone contesting that agenda deserves praise, not prison. Others caught serving imperial interests deserve what they get, and then some.