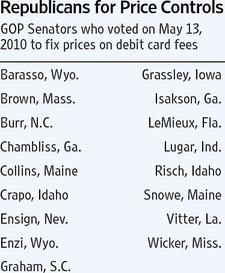 Another day, another mess to clean up from the 111th Congress. The latest debacle is the looming Federal Reserve rule to fix prices on debit cards, which threatens the flow of credit to low-income Americans and promises higher fees on bank services for nearly everyone else.

This is another glorious result of the 2,000-plus page Dodd-Frank financial reform, which ordered the Fed to fix prices on what banks may charge merchants each time they swipe a transaction. The provision is the special handiwork of Illinois Democrat Dick Durbin, who pushed it through the Senate as a sop to Wal-Mart, Home Depot and other giant retailers. He also got to whack the banks one more time.

Under current rules, every time a customer uses a debit card in a store, the issuing bank charges the merchant a small transaction fee, which represents a percentage of the sale. Under the new Fed rule, which will take effect in April unless Congress acts to stop it, that fee will be capped at 12 cents per transaction, reducing the charges by some $12 billion to $14 billion and in effect transferring the cost of debit cards from the merchants who pay the fees to the consumers who use them.

Merchants argue that if they don't have to pay as much per transaction, they will pass along the savings in lower prices. While that is doubtful, the loss of that revenue will force debit card issuers to raise fees elsewhere to compensate.

Congress's 2009 effort to regulate credit cards shows what will happen. Do you like free checking? Enjoy it while you can, because unless you're a high roller you will soon be paying for check-writing privileges. The price controls have also caused banks to deny credit to marginal borrowers—i.e., those with low incomes. Many have been forced out of the formal banking system and into the arms of payday lenders (if they're lucky) and loan sharks (if they're not). Mr. Durbin should have called his amendment the Payday Lender Empowerment Act.

Amended to Dodd-Frank at the last moment, the Durbin gambit avoided the scrutiny of hearings and passed the Senate 64-33. Seventeen Republicans went along for this ride, which proves that ignorance is bipartisan. (See the Mensa list of GOP ayes nearby.)

But some who favored it at the time have changed their tune. In a letter to Fed Chairman Ben Bernanke, 13 Senators have called the pro-consumer pitch for the legislation a hoax, asking the Fed to minimize the damage. The signers include Republicans David Vitter (Louisiana) and Mike Crapo (Idaho) who voted for the amendment in their re-election year and now should be required as penance to take a remedial course in financial education. Write on a chalk board 1,000 times: Price controls on credit lead to . . . less credit.

Maine's Olympia Snowe has expressed belated concern for the new rule's impact on smaller banks, which often don't have large loan operations or other financial services to offset their loss of fee income. Democrats Kay Hagan (North Carolina) and Michael Bennet (Colorado) are also born-again critics. While the Durbin amendment created a carve-out for institutions with assets of less than $10 billion, few small banks will be able to compete in a marketplace blanketed with the artificially lowered fees of larger institutions.

As they survey their wreckage, some Members are rallying behind a bill introduced this week by Senator Jon Tester (D., Mont.) that would delay the rule-making for two years. Mr. Tester at least had the good sense to oppose the bill last year. But if the law is a bad idea, it won't be a better idea in two years. This looks like one of those classic Beltway compromises that gives Senators political cover but doesn't solve the problem.

Even Democrat Barney Frank, the maestro of politicized credit, has said the Fed's proposed rule sets the fees too low and is better left to the market. "Unfortunately the evidence we've seen elsewhere is that consumers don't get any benefit from this," he added.

Now he tells us. Mr. Durbin pitched his bill as pro-consumer but it was really an attempt to rob banks and debit-card issuers in order to pay off his campaign check writers in the retail industry. As usual, the little guy is getting trampled.