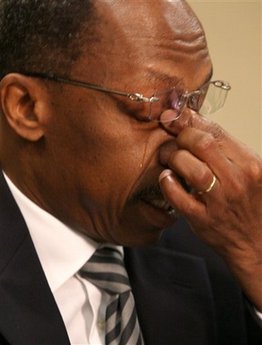 He "headed back to his country on Friday after ignoring US opposition to a homecoming some fear could disrupt Haiti's presidential election runoff on Sunday."

He's wanted to return any time, "to contribute to serving my Haitian sisters and brothers as a simple citizen in the field of education." He has no further political interests. Believe him. It's true. He wants only to aid Haiti's recovery, doing what he knows and loves best.

On March 17, AP said "South African Foreign Minister Maite Nkoana-Mashabane was on hand to see (him) off," accompanied by his wife Mildred and daughters Michaela, aged 12 and Christine, aged 14.

In Zulu, Aristide said, "The great day has arrived! The day to say goodbye before returning home. We are delighted to return home after seven years. In Haiti also they are very happy," adding that "their dream will be fulfilled," shared by millions of supporters worldwide.

According to Mark Weisbrot, co-director of the Center for Economic and Policy Research:

"Aristide's return marks an end to the era when the United States gets to choose the political leaders of other countries. It is a historic victory for democracy and self-determination."

Weisbrot is a distinguished analyst. Perhaps his conclusion is somewhat premature, but others agree that decades of destructive US power left America weaker, not stronger. Its influence is ebbing. One day, world leaders will reject it. Why not! It's counter to their own self-interest.

"The plane landed in (Dakar, Senegal) Friday, and is expected to arrive in Haiti" Friday afternoon local time. For millions of Haitians who love him, they've awaited this moment for over seven years. A joyous welcome is planned.

Looks like he has landed.  Now whether they allow him to leave his hotel room or not probably depends upon how secure they feel about counting the votes.

US/Western Tanks to a Spent Force