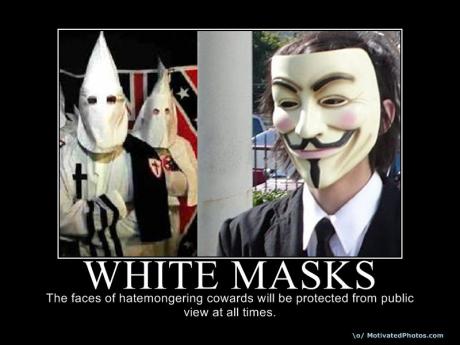 Why is Guy Fawkes' face so popular as a mask? Lets look at what he did with his life:

On November 5, 1605, a handful of pissed-off British Catholics thought they'd get the religious tolerance ball rolling by blowing up King James I and Parliament. The plan was simple: get 36 barrels of gunpowder in the basement of the House of Lords, light it, run, assume the revolution was underway.
Except the revolution never even got their drum machine set up, because King James was tipped off about his pending assassination days before. The conspirators were subsequently discovered and executed

But What if They Had Succeeded?

The idea, according to some historians, is that the act of terrorism would have actually sparked a backlash against the country's Catholics. Like, Salem Witch Hunts where targets aren't accused of sexing it up with the Devil, but religioning it up WITH THE POPE.

As it played out, King James' son Charles went pretty easy on the Catholics and reversed a lot of anti-Catholic policies. But in this alternate universe where Catholic terrorists blew up his dad, you can imagine how that would have changed things.

That Charles would've gone bananas for Protestantism, probably turning England into a hard-lined Protestant absolute monarchy. England would have become one of the most frigid, God-fearing, stuck-up places on the planet, thus making the whole voyage of the Mayflower unnecessary, the Puritans would have had no reason to leave.

Without the Mayflower, we wouldn't have the Mayflower Compact, the document that established a watered down form of democracy in the colonies. And without a thriving, orderly, colonial system to develop the continent, the U.S.A. would have likely remained a Loose Collection of Multinational Settlements.

So in a nutshell Guy(Guido) Fawkes wanted to kill the king of England because of religious persecution and if successful would have kept America from being what it is now. Not sure if I should cheer for that or not What do YOU think Mr. Editor????

4 Comments in Response to On Guy Fawkes(the mask guy)

I put that end thing on here so someone would answer and this would get on the front page unlike the letter where I said clearly that I do not speak for all O'odham.

whatever i saw that afrter the fact.

The more I think about it the more I believe Guy Fawkes(or his face or whatever) should be more a symbol of failure than a symbol of rebellion and freedom.

But then he did try and thats all anyone can ask right??

Anyone gonna talk about this?

Buchanan: Where Does NATO Enlargement End?

From teenage girls to trained assassins: They were drilled to shoot...

Why Most Smartphones Don't Have Removable Batteries Anymore

Episode 248: THE WARNING WE IGNORED