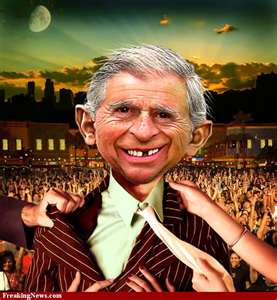 To win public attention, yes, but to win the GOP nomination as a standard bearer for president, next to impossible.

There’s a lot of funfair and flying graffiti in the air, but that’s more for the benefit of his sponsors and rabid supporters than for his own benefit. It is "their" way of picturing him as a Broadway attraction – political showmanship if you may – which gets a lot of snickering public attention.

The proof I present that the chance of getting the nomination is next to zero is not a bias speculation or a pure personal assumption -- it is historical, let alone factual. And let’s not kid ourselves about it: see the record of defeats, repeated thrashing and the cycle of dropping out of the race before it’s over, which have been running throughout those years!. Ask those political dog-race trainers in the presidential nomination derby. They know.Many observers are unhappy about those straw polls carrying eye-catching headliners that RP wins or have the best chance of winning -- all the time. Cynics call this zarzuela a "dog & pony show". I call it ad nauseam … despicable, to say the least.

Many observers are unhappy about those straw polls carrying eye-catching headliners that RP wins or have the best chance of winning -- all the time.Cynics call this zarzuela a "I call it … despicable, to say the least.

In the Freedom Forum section of this website, I wrote down my confirmation that RP was wasting time and money on this donkey-like race ... why? Ask his butt-pushers ["they" or "them" -- butt-pushers know everything about it]. "They" plaster his name all over the place all the time as if it is worth reading -- even though "they" knew that RP does not even have a Chinaman's chance of winning the presidential nomination race.

I always think of what RP should do and not do. Dr. Paul should reject mouthing the "expertise" of his pet-groomers’ street-economics making him appear like a beauty contestant in the presidential nomination pageant with a silicon breast that looks bigger and seductive than what’s real, especially when he delivers his discourses on Economics, as if "they" want the American people to believe that there is no difference between a doctor of medicine that he is, and a doctor of economics, which he is not.

I will not say this if as a Libertarian of Reason I don’t care about RP, but I care about him and I will say it just the same in his defense, that his persona has been falsified, to appear with a faked public image for "their" own selfish agenda, and to the detriment of his political future.

Like when there is a zero or a negative understanding of what "banking secrecy" means, which in Economics is actually economic security. If the Central Bank’s "confidential operations" are made that "transparent" as this obsession in Congress to "audit" the Federal Reserves, let alone abolish it, is being attempted to make it into law as an open public disclosure, is not the way how to run the economy. It would be catastrophic! The worst 1920s massive economic dislocations and depression in the history of mankind was actually triggered by "panic". Study and know it by heart like I did. Better still go to school of higher learning and get an education then speak the truth about it with self-confidence and authority using the power of knowledge.

These experiential studies and empirical science in Economics are written in time and carved in stone and especially studied by and known to Economic Ph.D.s, not to doctors of medicine! Expertise in mud-slinging is of no moment … it is irrelevant, and neither anger nor ignorance has any place here. For, the American people are not that dumb … they will always notice the difference!

RP should get away from the haters of the System where "they" boxed him in as a tool to carry out "their" agenda -- through him.

Anyway, to back this up, notice that the number of Libertarian X-R3volutionaries behind this move, and the enemy within and their radical accomplices from the Left combined, is too mediocre or not good or big enough to make RP win.

Finally, RP should purge himself of this idea that liberty also means the freedom to destroy the established institutions of America. By sponsoring and digging in deeper into this rabid idea, RP must know that he only caters to those few rejects of our main society, who believed with insuperable hate that their country – the United States of America – is an "Evil Empire" that they must destroy by all means fair or foul.

More of those weirdoes as if coming from another planet rob RP the chance of becoming the president America needs … like how "they" fed his mind with this idea that when he is president he would express his outrage in behalf of those who hated their government by recreating America without a Central Bank or Federal Reserves, without an income tax or IRS [just plain hate there, and more hate and hate here to cure this recent breakout of anti-Government-State neurotic paranoia (!)], with a foreign policy that renounces U.S. leadership in International Affairs, abolishing the United Nations and turning this nation into a compulsive recluse with nationalistic fervor, and similar other ridiculous no-no. These are not real ... only a delirious obsession of reality that could never take place here or would ever happen in America.

In short, these are all but in a dream …distorted aspirations in Cloud 9 … unreal and extremely delusional!

But here’s where our ordinal nth moment of liberation lies: If we have a heart of a president like RP, and with his brilliant mind on the right track, I really believe that our hope for this country’s future survival is far from over!

H. Skip Robinson -- Don’t argue heads up with anyone when your knowledge is short-handed, which makes you feel like a fish on dry land. Your challenge to debate on the subject of Economics with noted economist Paul Krugman is ridiculous.

It is not for pseudo-street economist to launch this kind of challenge whose Economics is learned only by ear [no match at all for holders of Ph.Ds in any economic debate like this one], nor is it for those who can only express emotionally how they feel about the issue/s but cannot transmit wisdom … they can only transmit their anger and frustration, thus this short cut to Ad Hominem – at the same time they wish that they knew how to debate this erudite subject of Economics which I sympathize makes them feel like fish on dry land. Swearing and foul mouth are not weapons one should have to win in any debate. Is that not elementary?

H. Skip Robinson -- You again skipped my position as usual. I neither said to you nor to anyone that I "believe that our election system is fair and uncorrupted…" It is your unilateral assumption, and you have this problem of putting words – your own – into other people’s mouth! You have to get over with it!

On the contrary, the straw polls were corrupt, and the voting system badly corrupted by the Main Stream Media. The fact that Ron Paul has the largest percentage of votes, and yet he was not declared the winner, is a dirty trick … a detestable sleaze or fraud … an abominable corruption!!!

But my position is – let me remind you again before you shoot an arrow into the air and hit another innocent bystander – whatever the outcome of all these straw polls is meaningless … it doesn’t matter at all. Ron Paul doesn’t get the nomination anyway as it has been that way since yesterday, today, and tomorrow -- an outcome that will always be! I have already spelled out the reason why – and believe me, it sucks!

As always Bakadude, I disagree with you and I can't beleive you actually believe that our election system is fair and uncorrupted.  Didn't you every read the book Vote Scam and the numerous validating controverces on this issue. You act like you actually believe the various polls coming out of corporate media are truthful. He is surely the most popular candidate running. 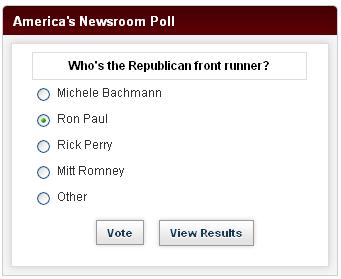 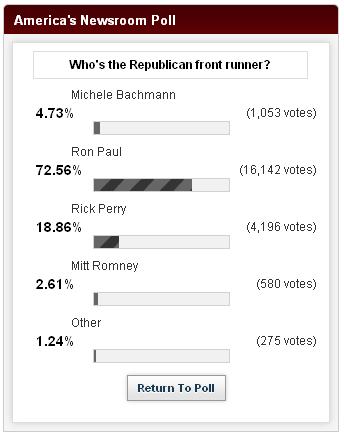 An then to make the statment that an individual cannot become better acquinted with economics, then someone with a Ph'D is another supid opinion.  I read your stuff.

Bakadude, I am glad to know that you are a lawyer. So am I, aside from what I am teaching as Professor of Economics. Thank you for this enlightening discussion. I hope we can have more of this kind in the days ahead. JV

The relationship of the Corporation created by law, and the people running it, i.e. Board of Directors, is defined by law. For all intent and purposes, our corporation laws see to it that a corporation is given the identity, the right and responsibility of a person, and under the law, conducts its business operations as such. It is in this context or manner how the corporation is viewed “as people as well”, in Romney’s words. ignorant heckler does not know that.

To Bakadude: We know Lincoln is a brilliant lawyer whose expertise on civil rights also includes rights of a corporation as a person who in law is endowed with such corporate rights. Like the Corporation, the Government is a corporate entity, where the identity of the people running it is distinct and separate. I take exception to your recently written editorial distinction "It’s The "People" Not The "Government" That Spoils The System" which Ron Paul had probably read and challenged Romney with the same principle that Corporations are not people.

To prove your scholastic essay right on this very fine distinction, the angry enemy within who are really desperate to assassinate the Government, did not succeed in doing it … they only assassinated Lincoln -- not the Government that he runs. The Lincolns in Government come and go, while the Government stays. Is Ron Paul a fan of yours?

Thanks JV … you have a very keen observation. You must be a very learned man.

You hit the nail on the head, Bakadude. This is a realistic assessment of Ron Paul’s always strong showing in the mock election. Why he does not get the nomination is another story. Always wanting to do, or taking the side of, or even proposing, the impossible, make his dream of becoming president impossible!

In the name of liberty and freedom, people suspect he is against almost everything for the camera. To him the Government is a nonentity. His radical Libertarianism is quite odd, i.e. only the individual exists. And yet where does he works, in the Government, which he wants to mollify as a provider and at the same time crucify as a wrongdoer, and in some instances, even wanting to get rid of.

As a metaphysical politician of some sort, I have noticed some of his proletariat views tending to show that the government and the people are distinct and separate entities, just as what he had recently shown what he believes along this line that a Corporation is not a person. These views are not shared by mainstream Americans.

Bakadude is absolutely right. In those mock elections, Ron Paul is always there for some reasons, but winning the nomination is not one of them.