I’m taking some time out from the many things I got to do today setting up the HQ to share some 3 important bits of news...

1) Tonight we meet for the first time at the Western Libertarian Alliance HQ. “We”? Well, those who are willing to get fingernails dirty advocating for Liberty. This is best explained by doing, so if you pay attention you’ll be inspired. (7pm – 9pm+ 4700 N Central #102 / A downtown liberal art gallery ‘The Paper Heart’ is showing “America: Freedom to Fascism” at 9:30pm for those interested)

2) KPHX 1480 called to offer me a Sunday talk show to begin March 25th. The Air America Phoenix people that I worked with for a year and a half have teamed up with Sheldon Drobney and his wife Anita (one of the co-founders of Air America). KPHX is the flag ship of 10 stations that spread across the country. They have also linked up with Sirius Satellite Radio. Not only do they know me to be a hard core, no-compromise Classical Liberal (i.e. libertarian) it is what they are counting on to add to their stable of hosts. This is a “Progressive Network” (so progressive they are adding a libertarian to the lineup). I know all of the people involved very well and they know me, so there is no attempt at altering my long stated (and Internet archived) positions on the proper role of government and what I see is coming fast to the individual lives of Americans. So while I am very pleased with this opportunity to expand the message and will take all of the opportunities offered me to guest host for some of their other hosts with very large audiences, I am not too surprised because many are seeing the logic and reason of libertarian philosophy as the world starts its global collectivist meltdown.
Declare Your Independence with Ernest Hancock will start off where it left off 2 years ago when I became the producer for the then already famous Charles Goyette. FreedomsPhoenix took all of my time and I saw the Internet as the future, so I left radio to have the most influence on the freedom movement I could. FreedomsPhoenix was the vehicle that drew me to the network’s attention and helped my friends at the station convince the network to try my show for 3-6 months to see what impact I’d have. A very nice surprise for all of us. 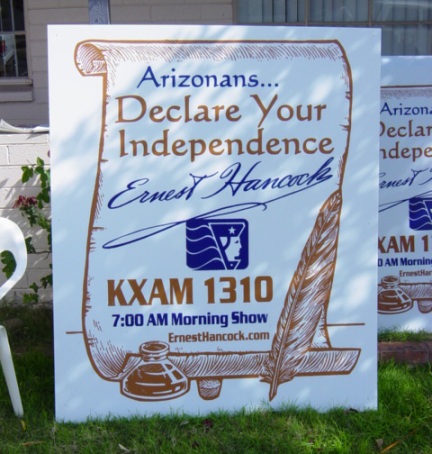 My talk show’s radio archive is still in place and still gets between 15,000 and 20,000 downloads a month (gott’a love Google). Michael Kielsky from www.Betterthanyours.com pioneered MP3 archiving with me years before “podcasting” was even a word from the beginning. We started on KXAM as the morning show (an amazing set of circumstances allowed a hard core libertarian a morning show for 2 hours every weekday in one of the top media markets in the world (imagine all of the trouble we created). Later I would move to KFNX 1100 and then later become Charles' producer. Working with Tyger Gilbert at www.AZwebAds.com Michael will be linking up the capacity of the Radio Show with FreedomsPhoenix and the sky is the limit. We’ll start slow and make sure that we provide a firm foundation for future long term expansion (as we always do).
The future is going to get very messy and at the very least we’ll be able to provide an understanding of what is happening and pretty idea as to how and why.
“Freedom’s the Answer,… What’s the Question?”
3) Maricopa County has been getting a lot of attention nationally about how the County Attorney is just as (fill in the blank) as our favorite Sheriff Joe Arpaio. Putting the two together is certain to create an environment that will provide libertarians with a perfect example of what happens when too much power is consolidation in the hands of too few and there is no mechanism to touch them. (Still Voting?)

4 Comments in Response to "Declare Your Independence with Ernest Hancock" back on the radio, and...

BTW - Sheriff Joe Arpaio did call me back and we had a lengthy discussion about things.

Summary:
Sheriff Joe and Andrew Thomas get along very well, "I arrest them and he prosecutes them" (expected :)

Joe also wanted me to know that he supports Mitt Romney for POTUS and is actively campaigning for him on conservative talk radio programs around the country.

It was a polite conversation but I was able to get enough information to understand that a Sheriff like Joe and a County Attorney like Andrew Thomas is going to create a very large recruitment entity for the libertarian cause :)

I think they see the future. But most likely it is because I am still friends with many of the people there that i worked with for over a year and a half at Air America Phoenix and they know I'll do a good show for them.

I sorta wonder whether there might be an ulterior motive ... maybe somebody saw this as a way to draw your energy from the Paul campaign. ;-)

Sounds like Hobbes/Machiavelli philosophy is attempting to RFID us into a society that is, obedient, submissive and apathetic to dissent. There is a point where we are simply prisoners of our own design. I say "well done" to anyone who draws a line in the sand and shouts "FREEDOM IS RIGHT HERE." So well done Ernie, hopefully we will see the time soon where we come together as a community and realize that Justice is no longer blindfolded, and is acting with malice for control and power, eating away at us like some kind of cancer. We need our Justice system to Just be Just and stop being nonsensical. Why are we imprisoning ourselves over nonsense?

"Those who expect to reap the blessings of Liberty must undergo the fatigues of supporting it."
Thomas Payne