I've heard various people on the show describe how they thought colloidal silver killed microbes in response to your questions. Dr Judy came close when she described how silver ions do this, but did not address silver nanoparticles, which are much more effective,and more so as they become smaller. Actually, silver kills bacteria, fungus and virus in different ways.

Bacteria are stopped and killed when the silver nanoparticles enter the cell and disrupt its movement, reproduction and respiration.

Fungi are stopped when the silver nanoparticles damage the cell wall, enter the cell and disrupts reproduction by stopping production of spores and killing them.

In all cases, smaller nanoparticles more easily enter to be more effective. Silver nanoparticles are able to deposit an atom of silver at many different locations of attack, unlike silver ions which are individual atoms which attach and then can't attack other locations (one and done). Also, silver ions are reactive with salts in the body and mostly combine with those, not allowing them to attack microbes effectively. Whereas, silver nanoparticles persist in the presence of salt in the body and then can attack multiple microbes of various types.

Attached are some papers you may find interesting which address this. To save time you can look for the things I highlighted. There are also some good illustrations. See PDF's below...

2. Advances in Biogenic Nanoparticles and the Mechanisms
of Antimicrobial Effects PDF

Dr. Tamburri, on his limited down time, loves to study Early American and World History in both didactics and in travels. He has taught inline skating for many years, hikes often with fellow doctors, and recently began pursuit as a poi practitioner! Webpage: http://www.longevitymedical.com/

A federal judge orders Hillary Clinton to be deposed over the use of her private email server; Fox News senior judicial analyst Judge Andrew Napolitano reacts on 'Fox & Friends.' #FoxNews 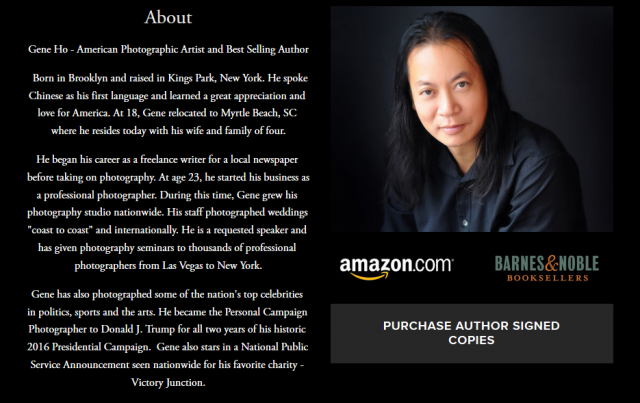 Gene is going to be doing 6 or 7 events in the Phoenix area from March 11-18th, a few of them private, but most of them open to the public.

He is speaking at the Full Gospel Businessman's Fellowship International - Dinner - Banquet Style on Saturday, March 14th, but he has another public event prior to that one which is listed below:

(with members from the Arizona Republican Asian Coalition)

Suggested Donations to LD17 are greatly appreciated, for hosting the event - as always Donations to Candidates is Kind

Gene was President Trump's personal photographer before and during the 2016 Presidential campaign whose book TRUMP-ography became a bestseller several times over.

Gene is known to be a one-man MAGA Rally. His humorous anecdotes and high-energy vibe have made him a big hit as he crisscrosses the nation, entertaining and educating crowds while encouraging people to call forth on their courage to stand and support President Donald Trump!

For a list of his many upcoming events see here: 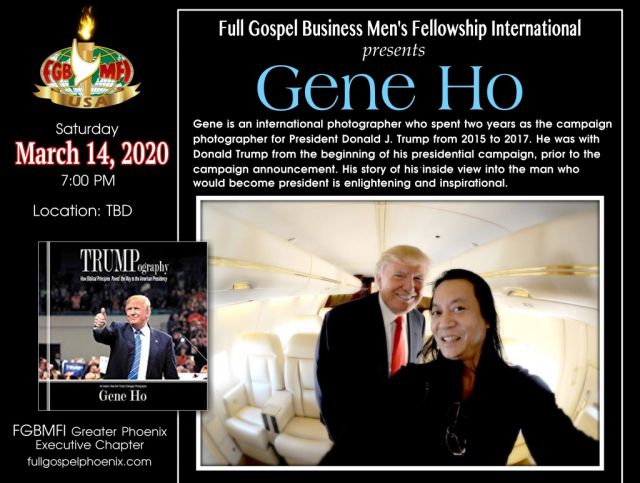 Gene walked away from the Democrat Party and encourages other minorities, in particular Asian Americans and Latinos to rediscover their true conservative natures and walk away!

He recently appeared on the Rev. Jesse Lee Peterson Show, the Eric Metaxas Radio Hour, and the Huckabee Show among many others:

The event takes place at a private home so only registered (Eventbrite Ticket) Attendees will be allowed in:

Doors open at 5:30, mingle and eat then Gene Ho will speak at 6:45, introduce all candidates in attendance and then everyone will settle in their seats for the candidates to circulate. Attendees will stay at their tables while candidates rotate every 5 min, introduce themselves and answer questions.

The event ends at 8:00 pm but people are welcome to hang around afterward to talk.

Because he was so close to Trump over the course of the entire campaign, he got to have and view countless interactions with candidate Trump and his family and can speak to a few media myths better than most.

The book is a first-hand account of the campaign, containing one-of-a-kind behind-the-scenes anecdotes as seen through the eyes and lens of Donald Trump's personal campaign photographer from its earliest days when Trump's audiences were as small as 50 people to the end of the entire two year campaign where that first trickle soon became a river of enormous stadiums full of common Americans, brimming with enthusiastic energy.

These common men and women had long been held in wanton disregard by the Globalists, abandoned by the political establishment and mischaracterized by the media. In Donald J. Trump they saw a champion for the working person and a beacon of hope in lifting their prospects, rejecting the endless wars and bringing American Greatness into full bloom.

This book reveals the principles that drove the campaign and empowered Trump to become the 45th President of the United States of America. Gene shares a great number of personal anecdotes about Donald Trump and those in his close circle during the campaign as well as many of his positive personal qualities and character traits and he shines a blinding light on many of the disparaging narratives espoused by the mainstream media.

What photographers see is often overlooked by everyone else. Gene Ho, a successful Chinese-American photographer who was not at the time a Trump supporter, was catapulted into the national limelight yet as an innocuous fly-on-the-wall witness to history, a view that few people get to experience.

Not only does he share the view from this unique vantage point but he also shares some of his own highs and lows in his personal struggles during the campaign and how he used Old Testament parables as guideposts of inspiration in order to bring to his life and to the life of his readers, a path to personal freedom.