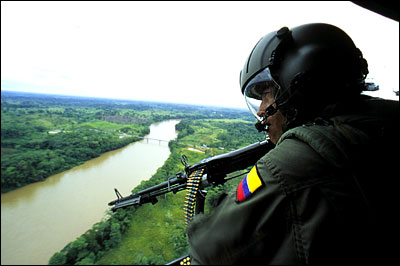 The heads were stuffed in a black plastic bag and tossed outside a shopping center with a note saying, "For every one of us you kill, we are going to kill 10." An ex-police commander, also without a head, was found with the soldiers.

The National Association of Former Border Patrol Officers (NAFBPO) extracts and condenses the material that follows from Mexican and Central and South American on-line media sources on a daily basis. You are free to disseminate this information, but we request that you credit NAFBPO as being the provider.

Saturday, 12/20/08
El Universal (Mexico City) 12/20/08
The news had several separate reports regarding concerns over elections in 2009. Following are excerpts from four.
- The national leader of Mexico's PRD party called for the other major parties, PAN and PRI, to quickly form an accord to prevent the infiltration of narcotraffic into next year's political campaigns.
- By the end of the year there will be no "Christmas truce" agreement by political parties to avoid the dirty fight and low blows in the political contests in 2009. The Federal Electoral Institute (IFE) will have to apply the law to prevent the entry of illicit money into the campaigns.
- The government and people of Mexico will have to find a model in which there is no room for organized crime to corrupt the authorities or to have their own "armies."
- President Felipe Calderon: "We can no longer accept the attitude of indifference to the problem of insecurity that, by continuing to ignore or cover up, would lead to higher risk to the national security."
—–
- The Mexican Army captured 15 members of the Sinaloa Cartel Saturday morning during an operation in San Pedro, Nuevo Leon, [near Monterrey]. The gang members were arrested in a luxurious home in a neighborhood considered to have the highest income per capita in Latin America. The raid interrupted a reunion party for members of the cartel, "the most powerful in the country," the leader of which is Joaquin "El Chapo Guzman who is presently reported exiled in Central America.
——————–
Frontera (Tijuana, Baja California) 12/20/08
- The Secretary of the Board of Directors of Mexico's Chamber of Deputies [House] called for the Justice Department to open an inquiry against ex-President Vicente Fox and his ex-spokesman to clarify if there was collusion or negotiation with narcotraffic cartels in Mexico, since this would constitute a crime for a government leader. The Secretary, Jorge Manuel del Rio Virgen, said that President Calderon was correct in pointing out that it was during Fox's term that narcotraffic grew and that "everyone knows" that it was because of the dismantling of government intelligence and the disorganization and incapability of security to combat organized crime head-on, he said. Del Rio recalled that the main person in Fox's government, principally in the area of security and justice, is today Attorney General, Eduardo Medina Mora. "In whose hands are we in?" he asked.
- In a span of 12 hours Saturday, five people were "executed" in various parts of Culiacan, Sinaloa.
——————–
Entorno a Tamaulipas (Tamaulipas) 12/20/08
Three military and one civilian were killed in a shootout in Reynosa, Tamaulipas [across from McAllen, TX ] last Thursday evening. The article complains that even after 26 hours, at press time, there were no details released regarding the battle. It is presumed from local witnesses that the shooting started when an Army convoy on patrol was confronted by several vehicles of armed men. A taco vender caught in the crossfire said when the shooting started, he began running away and then heard a grenade explode. Five reporters who arrived on the scene were treated roughly by soldiers who took away their cameras with photos of the battle. One reporter charged that, besides taking his camera, soldiers also took several cell phones and his wallet with 4,000 pesos, as well as his "visa", credentials and several bank cards. Another reporter said they took his video camera as well as keys to his car.
——————–
La Prensa Grafica (San Salvador, El Salvador) 12/19/08
El Salvador's General Bureau of Migration and Aliens has sanctioned more than 80 firms all around the country for hiring alien personnel who are in illegal status or who lack the proper work authorization issued by the Government. The fines were imposed from January to early December of this year after completing 650 routine inspections in the different places where the various businesses are located.
———–
El Heraldo (Tegucigalpa, Honduras) 12/19/08
In Tegucigalpa, two men who'd been tied up were thrown out of a "microbus" and then gunmen in the vehicle opened fire on them immediately. Then, the bodies of two other men were found by the side of the highway leading east; like the first two, their hands and feet were tied. A fifth victim, an unknown, was also found shot to death. Yesterday there were three other gunfire victims in the northern part of the country.
———–
Sunday 12/21/08

The Police State's War on Weed and Backyard Gardens