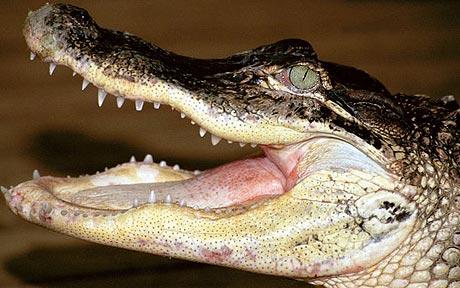 Simon Hughes was on a hunting trip with his father when they came across the massive reptile.

The boy grabbed his junior-sized .410-gauge shotgun and fired at the creature which was 20 times his size and is one of the biggest ever seen in Texas.

Afterwards Simon said: "I wasn't afraid for a second. Next year I'm going to kill me a bigger alligator."

He described how he shouted “holy moly” when he saw the size of the alligator and intends to bring the mounted head in to school for show-and-tell.

He said: “My friends were proud of me and I was proud of myself. It's humungous.”

The first grader was on a hunting trip with his rancher father Scott Hughes and a guide.

He learned to shoot guns at the age of four and also knows how to drive all-terrain vehicles.

His mother Toni Hughes said, "It sort of scares you to death because there are alligators, there are snakes, all sorts of things out there.

"What we thought was massive was a 10 foot alligator, and this one just dwarfs the 10 foot. It's just so massive and prehistoric looking."

The alligator’s head will be mounted and it will also be turned into book shelve holders.

Simon’s father had a permit to kill two of the 40 alligators on his 5,000-acre ranch near Houston.

No doubt the alligator was Obama in costume for Halloween.