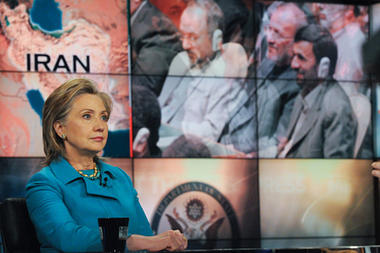 President Obama has made nuclear nonproliferation and disarmament the top priority of his diplomatic outreach this year, but that vision will face a sharp challenge at the United Nations in New York Monday when Iranian President Mahmoud Ahmadinejad takes the stage.

Announcing only last week that he would attend a 189-nation conference on the Nuclear Non-Proliferation Treaty, the controversial Iranian leader plans to mount a frontal attack on world nuclear powers – the United States chief among them – that he will say have failed in the NPT’s nuclear disarmament obligations.

Monday’s opening session of a normally staid, little-noticed, twice-a-decade review of the treaty takes on the trappings of a clash of rival global visions because Mr. Ahmadinejad will be closely followed on the conference dais by Secretary of State Hillary Rodham Clinton. Secretary Clinton may or may not refer to Iran by name in her comments, but aides say she will declare the 40-year-old NPT, considered a cornerstone of international security, threatened by countries like Iran and North Korea that, according to UN nuclear experts, have violated its terms.

The Obama administration is pressing for what would be a fourth round of international sanctions on Iran over its nuclear program, which Western powers suspect is aimed at delivering a nuclear weapon. Clinton is expected to use her UN visit to lobby Security Council members to approve tough new sanctions on Iran.

But she is no doubt aware that Ahmadinejad’s high-profile visit to New York and a fiery, us-little-guys-against-them-bullies speech from him risk winning some sympathetic support in an international gathering with many small and relatively powerless countries.

Declaring on “Meet the Press” Sunday that Ahmadinejad would “try to divert attention and confuse the issue” in his speech, Clinton added, “We’re not going to permit Iran to try to change the story from their failure to comply” with NPT obligations.

Iran has failed to allow UN nuclear inspectors into all of its nuclear sites and last year revealed previously unknown underground sites only after word of their existence began to surface.