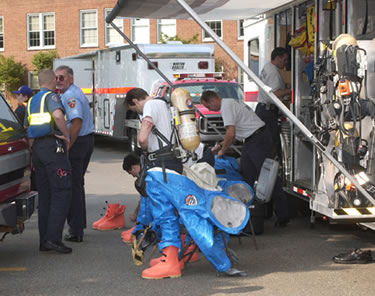 A massive emergency response exercise is scheduled for the Chicago area beginning Sunday.

The practice events spread over five days will include a simulated commercial airplane crash, a simulated rail-car evacuation and a simulated terrorist attack.

Road closures and detours are possible in the Chicago area.

"It is a full-scale exercise, so residents can expect to see emergency responders looking and acting as if this was a real homeland security/domestic response mission," the Illinois Army and Air National Guard said in a press release.

The exercise will begin Sunday with a simulated jetliner crash in southwest suburban Oak Lawn, "with debris and mass casualties scattered throughout the area," said Maj. Gen. William Enyart of the Illinois National Guard.
Toyota Park in Bridgeview will be the staging area for the Guard starting Monday. Also, Chicago's Office of Emergency Management will practice setting up a remote command center at Soldier Field to handle a large-scale disaster.

On Tuesday, a simulated meth lab will be raided on Green and York Streets in Bensenville.

On Wednesday, Bensenville area also will be the site of numerous simulated terrorist attacks "including takedowns of suspected terrorists," simulated building collapses with trapped victims  and mass decontamination and medical care by the National Guard.

On Wednesday evening, the CTA will stage a rail-car evacuation SWAT incident at 15th and Clark streets. Chicago police K-9 units will detect "simulated explosives manufactured by a terrorist group on a CTA train." A simulated explosion will occur from 10 p.m. Wednesday to 4 a.m. Thursday. There will be road closings in the area.

On Thursday there will be another takedown situation in the Bensenville area and a simulated chemical explosion at the Nalco Co. plant at 6233 W. 66th St. in Chicago.

The Illinois National Guard says more than 50 local, state, federal and private agencies will participate in the drill to learn how to respond to disasters. The five-day training exercise will
run from Sunday through Thursday, June 17.

Hmmm... Nalco.  Where have I head that name before?