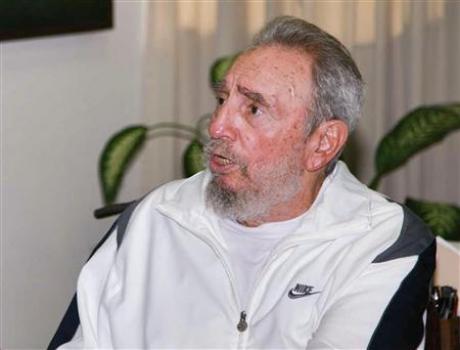 (Reuters) - Former Cuban leader Fidel Castro, who has lived in seclusion since falling ill four years ago, will appear on Cuban television and radio on Monday evening to discuss his theory that the world is on the verge of nuclear war, the Communist Party newspaper Granma said in its Monday online edition.

The appearance will mark the second time in less than a week that the suddenly resurgent 83-year-old has made a public appearance, after staying out of view, except in occasional photographs and videos, since undergoing emergency intestinal surgery in July 2006.

Last Wednesday, he made a visit to a Havana scientific center that was disclosed in a blog on Saturday.

Castro writes opinion columns, or "Reflections," for Cuba's state-run media that in recent weeks have focused on his prediction that nuclear war will soon break out, sparked by a conflict between the United States and Iran over international sanctions against Iran's nuclear activities.

Jim Jordan on the House floor commands respect… for Trump

Situation Update – Trump fighting from secure location, did NOT concede

In 2021, Politics Needs a 'Leave Us Alone' Coalition

Fireside Chat Ep. 168 -- Thoughts on the Current State of Our Nation

Buchanan: The Worst Of Days For Trump & Trumpists

Why Most Fell for the Lockdowns, While a Few Stood for Liberty