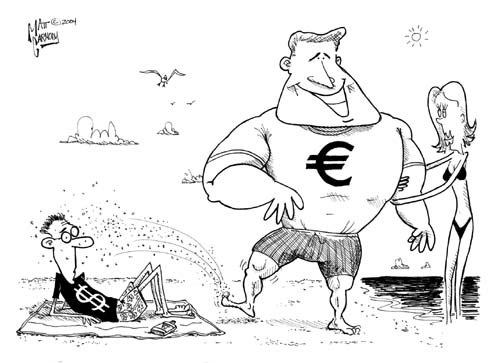 The dollar fell the most against the euro in 14 months and dropped to the lowest level this year versus the yen as economic reports added to evidence that the U.S. recovery is losing momentum.

The greenback touched a level weaker than $1.30 versus the shared currency as minutes of the Federal Reserve meeting last month indicated policy makers trimmed their forecasts for growth. The euro rallied for a third straight week against the dollar before partial results of stress tests on the region’s banking system due on July 23.

“It’s really dollar weakness based on some evidence the economy is slowing,” said Vassili Serebriakov, a currency strategist at Wells Fargo & Co. in New York. “The economic indicators are pointing strongly toward slower growth in the second half of the year.”

The Global Economy Is Going Down As Information Is Being Hidden From You!

When Will We Admit Covid-19 Is Unstoppable And Global Depression Is Inevitable?

Largest Shipping Decline Since 2009 And That's Before Coronavirus