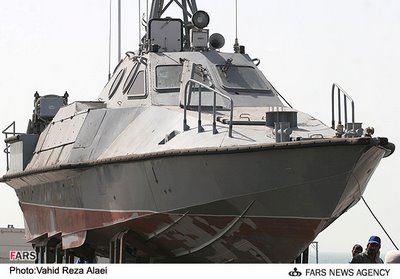 Iran kicked off mass production of two high-speed missile-launching assault boats on Monday, warning its enemies not to "play with fire" as it boosts security along its coastline.

The inauguration of the production lines for the Seraj and Zolfaqar speedboats comes a day after President Mahmoud Ahmadinejad unveiled Iran's home-built bomber drone, which he said would deliver "death" to Iran's enemies.

State news agency IRNA reported that Seraj (Lamp) and Zolfaqar (named after Shiite Imam Ali's sword) speedboats would be manufactured at the marine industries complex of the ministry of defence.

"Today, the Islamic Republic of Iran is relying on a great defence industry and the powerful forces of Sepah (Revolutionary Guards) and the army, with their utmost strength, can provide security to the Persian Gulf, the Sea of Oman and Strait of Hormuz," Vahidi said.

He issued a stern warning to Iran's foes.

1 Comments in Response to Iran launches assault boats with warning