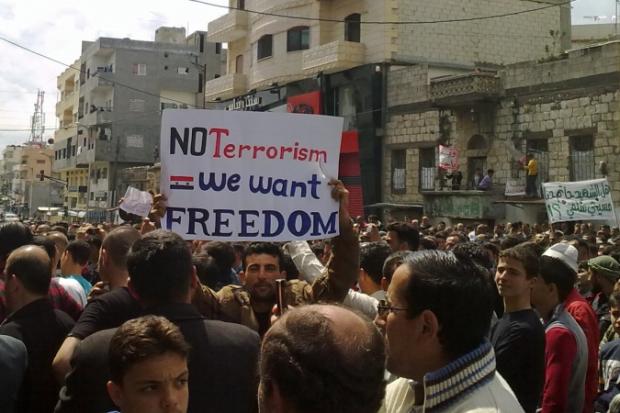 Thousands continue to take to the streets across Syria, despite reform pledges by president Bashar al-Assad. We bring you the latest news from our correspondents and other sources.

All times given are local (GMT+3)

Activist Suhair Atassi reports that a 4-year-old girl has been shot in the head by a sniper in Barzeh district in Damascus.

They are talking about incitement by foreign media, including Al Jazeera, Al Arabiya, and BBC Arabic.

A little earlier, the channel reported that a policeman was killed in Homs and two injured.

Hazem, an anti-government activist in the Damascus suburb of Harasta, says demonstrators there were marching in peace until security forces opened fire.

"Demonstrators were going with olive branches, it was peaceful," until they were "surprised by live ammunition from some security forces in one of the flats of the street."

"After this started throwing of teargas, live ammunition in the streets," he added.

Five were killed, in addition to large number of injured - "some of them very dangerous cases," Hazem said.

Activists say at least 40 people have been killed in various cities.

"We're not able to get to these places, we have limited access. In many areas we can't even get through on the phone," Amin said..

"Syrian TV has reported some violence.

"There were rumours that protesters would try to bring the protest to the heart of the capital, to Abasyeen Square. I went there earlier today and the amount of security forces there was incredible, some in plainclothes, some carrying guns, some with sticks."

A viewer sent us a link to this video, saying it's in Homs and filmed today. More than a dozen people are said to be killed in the city after security forces opened fire.