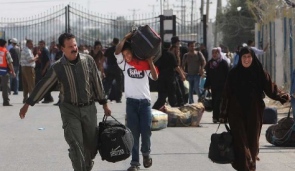 Egypt is to permanently open the Rafah border crossing to ease the Israeli blockade on Gaza, Nabil al-Arabi, the country's foreign minister, has said.

Arabi said Egypt would take "important steps to help ease the blockade on Gaza in the few days to come".

Speaking to Al Jazeera on Friday, the minister said Egypt would no longer accept that the Rafah border, Gaza's only crossing that bypasses Israel, remain blocked, describing the decision to seal it off as "shameful".

The announcement came days after Hamas, which controls Gaza, and their secular West Bank rivals Fatah, which controls the Palestinian Authority (PA), agreed to end their rift and form an interim government to prepare for elections.

In talks before the deal, the two sides had discussed reopening the crossing after positioning PA representatives at the border, a condition in a US-brokered 2005 border crossing agreement between Israel and the PA.

Mahmud Zahar, a senior Hamas official, told the AFP news agency that it was understood that the crossing, which under the 2005 agreement was to be monitored by European Union delegates, would be opened after a unity deal.