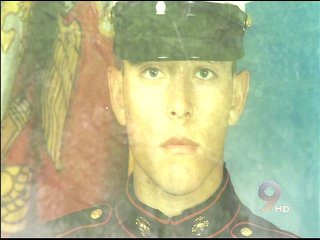 The SWAT team that murdered Iraq War veteran Jose Guerena in his home near Tucson kept a medical team waiting for more than an hour as the 26-year-old father bled to death, and then “sent them away,” reports Tucson ABC affiliate KGUN.

Jose’s wife Vanessa called 911 after seeing a knot of armed men approaching her home. She insists that the assailants never identified themselves as police. After waking up her husband — who had just finished the graveyard shift at a local mine — Vanessa hid in a closet with their four-year-old son. Jose grabbed his AR-15 and confronted the invaders, who burst through the door and started shooting. The intruders fired a total of 71 shots. The assailants initially claimed that  Jose had fired on them — an entirely appropriate response to a criminal invasion of his home — but later admitted that the husband and father was killed before he could pull the trigger.

After the fatal fusillade, Vanessa pleaded with the SWAT team to call for medical assistance; rather than doing so, they held help at bay until their victim was dead, supposedly in the interest of “security.”

KGUN “requested the emergency call records for Drexel Heights Fire Rescue. The 911 call center notified Drexel Heights at 9:43am. A unit arrived just two minutes later at 9:45. But deputies told rescue workers to stay put.  That’s standard to be sure they won’t walk into danger. But they waited until 10:59.  Then heard the radio call `Code 900′, that means they were no longer needed because the person was dead. One hour and 14 minutes went by.  Drexel Heights indicates they were never allowed to even examine Jose Guereña.”

The home invasion was supposedly intended to enforce a search warrant in a narcotics investigation. Neither Jose nor Vanessa has a criminal history, and no narcotics were found at the home.

1 Comments in Response to The Murder of Jose Guerena, Continued

Interesting, I had these same ass clowns hit my house a month ago.                 When I pulled up to my place they were already inside and I decided to drive to a corner store where I would have witnesses, they followed me (2 swat teams)           I removed my side arm and placed it on the seat, then took off my shirt and got out of my truck with my hands in the air while doing a slow turn around. To show I wasn't armed. Man did they look pissed. I yell out to them " sorry boys, looks like you don't get to kill anyone today"   These guys are NUTS, they will shoot anyone as they did the guy in the article.   Their moto is  " don't worry I have a badge and a gun and I can do what I want"   The sad thing is nothing will happen to these legal gangbangers except they will get put on PAID administrative leave (paid vacation)     What the *#@# has happened to this country ?   My heart goes out to his wife and his 4yo who now has no father.  SWAT = Scumbag With Ahole Tendencies

The US Military Is Using Online Gaming to Recruit Teens

US Deploys B-1B Bombers to Guam

Mexico's war on drugs: Moment THREE cartels ambush the military who fight back...