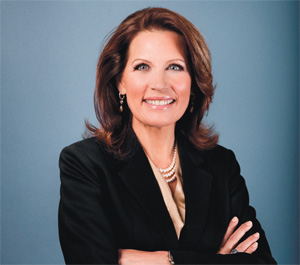 Rep. Michele Bachmann, who officially announced yesterday in Iowa that she is running for president, appeared on “Good Morning America” Monday, where George Stephanopoulos attempted to clarify some of her previous statements.

Among them: Bachmann’s claim that “the Founding Fathers who wrote the Constitution and the Declaration of Independence worked tirelessly to end slavery.”

“Now with respect, Congresswoman, that’s just not true,” Stephanopoulos said. “Many of them including Jefferson and Washington were actually slave holders and slavery didn’t end until the Civil War.”

Bachmann dodged the question, answering, “Well, you know what’s marvelous is that in this country and under our Constitution, we have the ability when we recognize that something is wrong to change it. And that’s what we did in our country. We changed it. We no longer have slavery. That’s a good thing. And what our Constitution has done for our nation, is to give us the basis of freedom unparalleled in the rest of the world.”

Maybe the Founders didn't end slavery, but they did set up the process for it in the Constitution. ALL men are endowed by their Creator....

David Barton's Wall Builder site has a load of info.

Slaves, schmaves. Washington and Jefferson didn't have slaves... even though many called them that. They were "indentured servants." There's a difference, you know. It all has to do with how honestly their "Masters" treat them.

These days, with mandatory centralized banking, income taxes, required ID that includes a SSN, required SSN for a job, and a whole bunch of other NON-FREE requirements, like TSA, and certain required medical, illegal weed, can't park on the lawn, etc., etc., we're worse off than Washington's and Jefferson's so-called slaves!!!